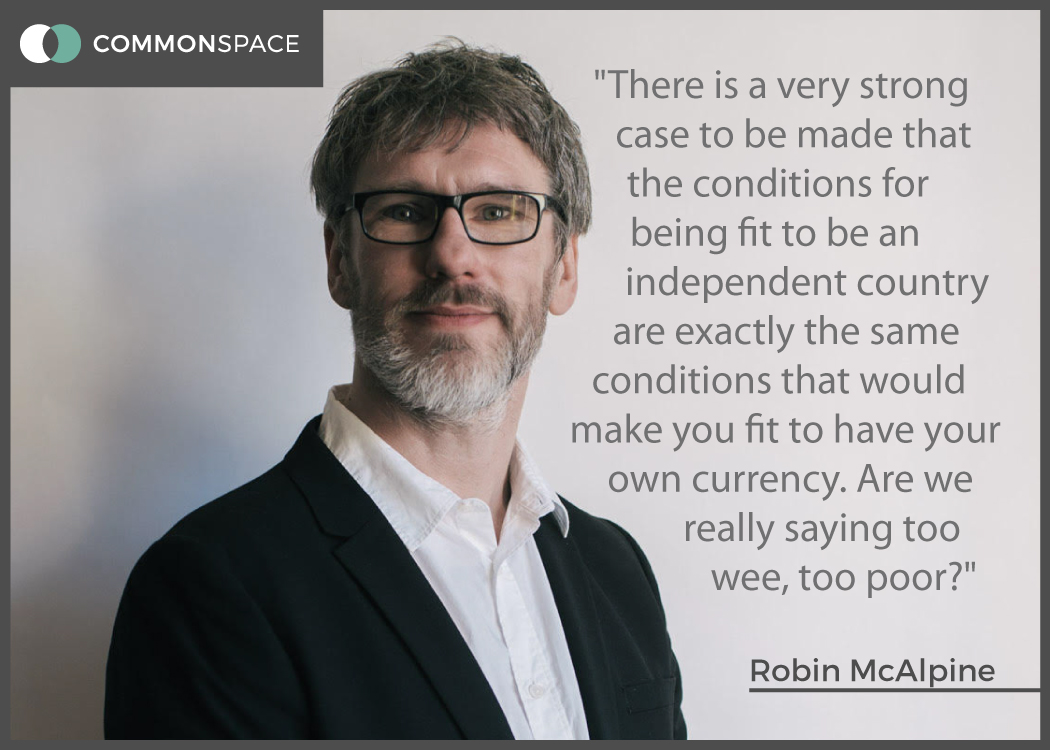 Common Weal director Robin McAlpine argues that establishing a Scottish currency is essential for Scotland to be a properly sovereign independent country and to banish the ‘too wee, too poor’ tag for good

OK, what now? What does the indy movement do next in shaping a pitch for the electorate? Can I suggest that we try to tackle the currency question first, since that will sort the rest out for us.

So what currency option do we want to offer the people of Scotland to persuade them to leave the UK? As a taster of where we start with this, in 2017 the Scottish Independence Convention held two conferences with a total audience of about 3,000 people.

At both meetings a show of hands was held for the support for different currency options. The combined number of hands raised at these meetings for Sterlingisation was one (in 3,000) – and she made clear that this was only as a brief transitionary option.

No-one wants Sterlingisation – and I defy you to find a serious economist who would say that long-term Sterlingisation is a credible currency solution for an advanced exporting nation like Scotland.

So if semi-permanent Sterlingisation has no support, the Euro is out in the short term and Sterling Union is just not electorally possible, what are the options? There are basically two left – a Scottish currency or a transition process to a Scottish currency.

This is where I want to draw the distinction between what the Growth Commission is proposing and what anyone else I’ve ever heard mention this is talking about. It’s not a negotiation about how long, its the difference between ‘during transition’ and ‘semi permanent’.

If we are transitioning to a Scottish currency, that means we’ve made the decision, we’ve started to take actions that move us towards a currency and in the meantime, prior to that currency being launched, we use Sterling for a short period of time outside a Sterling Union.

That is very, very different from saying ‘after a minimum of ten years you can start to talk about the possibility of a Scottish currency but only if six economic tests are met’. That’s semi-permanent – which is acknowledged by the fact that you have to build a whole financial system to support it.

So the transition is only a transition if we start to move, not if we wait to consider the possibility of a move at a date in the far future. People have to be really honest with themselves and each other here – the Growth Commission has no plan at all for a Scottish currency in any foreseeable future.

Are you OK with that? If you’re saying ‘look, I could compromise so long as we’re Sterlingised for only a short period of time’, then you’re absolutely disagreeing with the Growth Commission.

Unless there is a proper decision to begin the process of creating a currency and that decision is made before independence day, it won’t be the five-years-or-less of Sterlingisation which, from my many correspondences and conversations since the report launch, seems to be the maximum people could stomach.

If I’m right, that narrows us down a lot. Either we start a currency that is in place for independence day or before or shortly after independence day we kick off a process that begins immediately to do the same thing. If this position is taken, it is not an adaptation of ‘ten years and tests’, it is a rejection of the ‘ten years and tests’ model.

OK, now we’re really just negotiating timescales. So this is my question – what advantage do you see in delaying for three or five years? Why would that put us in a stronger position?

The Growth Commission does not make an argument for this, because it argues for the semi-permanent option. So what is the argument? I’ve not heard it yet.

I can give you the counter argument. It is genuinely true that for the first few years after independence Scotland would be a bit more vulnerable economically – like the UK after Brexit, any big change means uncertainty and so a bit more risk.

For example, once independent, international money markets might fancy their chances of taking a bit of a pop at Scotland, undertaking some kind of speculative attack. The usual method of dealing with this is to have a central bank and a foreign currency reserve.

The problem is that until we launch the currency, Scotland will not have a central bank or currency reserve. So we’ll be doubly vulnerable. Effectively, that seems to be why the Growth Commission wants to take the ‘ten years of austerity will pacify the bankers’ approach (we’ll punch ourselves in the face to save them the bother).

But if we did the set-up prior to independence day (which is the approach detailed in the various Common Weal papers on this and in our How To Start a New Country book), Scotland would still be a part of the UK economy during currency set-up. We’d have the protection of the Bank of England and in any case you can’t really speculatively attack a region in the way you can a nation.

With this approach you are never floating at sea, independent but without the infrastructure of an independent country. Instead you have your defence mechanisms in place from day one. It is harder, not easier, to attack Scotland under this model.

READ MORE – Economy debate at #SNP18: ‘If we don’t have our own currency we are at the mercy of the banks,’ Kerevan says

I’ve heard whispers from around Growth Commission circles which present the problem with this proposal as being that ‘money markets wouldn’t let us’. As well as being wrong (how exactly would they hinder us, never mind stop us?), I find this argument extraordinary.

There is a very strong case to be made that the conditions for being fit to be an independent country are exactly the same conditions that would make you fit to have your own currency. Are we really saying too wee, too poor?

I mean, dear god Iceland has a population the size of Edinburgh and it runs its own currency and central bank. In fact, it sustained both of these very successfully in the face of an economic crisis of a scale much greater than that faced by the UK (which has recovered much more slowly that Iceland).

So what is it about the Scottish DNA that makes us unable to do the same? We should reject these arguments.

Which brings us back once again to my fundamental question; I can live with a three-year transition period of Sterlingisation if I really have to, but why would we want to? Does anyone have a coherent argument in favour of this?

Or, rather worryingly, is this just loyalty? Is this just people saying ‘I can accept this pretty bad compromise if it saves the faces of the high heid yins’. Is that really our priority?

But without these being mandatory side-effects of Sterlingisation, who exactly is going to choose these options? The whole bloody point for most of us is that we want to be free of exactly this stuff.

So if the SNP is determined to keep going with this agenda, sure it’s damaging, but at least others of us can say ‘fine, vote against this after independence’. With semi-permanent Sterlingisation that option disappears – everything becomes mandatory.

I’ve been trying to gauge the response to the Growth Commission since it was launched. The fact that the Commission’s originators are still desperately placing articles in newspapers in their own defence shows how much they’re aware this isn’t going down well.

And talking to activists, every single one of them without exception has told me that five years is an absolute maximum period for Sterlingisation and that these proposals are going to be changed (though they are increasingly unsure if they’re really going to be given any say).

I embrace that. Let’s rule out the semi-permanent option and then let’s hear the case for the three or five year transition. I’ll certainly make the alternative case of ‘let’s just get this done’. And once we’ve got the semi-permanent option off the table the rest of the Growth Commission report will have to be assessed on its own merits and not as part of a non-negotiable package deal.

I resent the fact that, at a moment when we are again handed a real opportunity (the gradual erosion of trust in Westminster has been removing the public’s economic concerns way before this Growth Commission intervention), we’re too busy firefighting a deeply unpopular report to take it.

This is wasted time. We should be seeing the independence movement equipped with the tools needed to win the arguments, not leaving them utterly confused by being asked to support exactly what they previously opposed.

So let me summarise; I believe in Scotland and I believe in its ability to be a real country. I believe that a real country is capable of having its own currency, and that this is what Scotland needs. I do not accept ‘too wee’ or ‘too poor’ as an excuse to dodge this responsibility to ourselves and those that come after us.

I believe semi-permanent Sterlingisation has zero support in the movement, and I’ve heard no coherent argument why a long, drawn-out transition is in any way an advantage. I don’t understand why we’re talking about a compromise between ‘on our feet’ and ‘on our knees’ when ‘on our feet’ is an option.

And I do not believe that, until we have sufficient spine to look each other in the eye and say ‘I believe in a Scottish currency from day one’, that we have really earned the right to look into the eyes of the public and say ‘we want you to take the kind of chance that we’re too scared to take ourselves’.

The movement must agree to make the case for an independent Scotland with its own currency in the fastest timescale that our leaders allow. We can worry about all the rest after that.