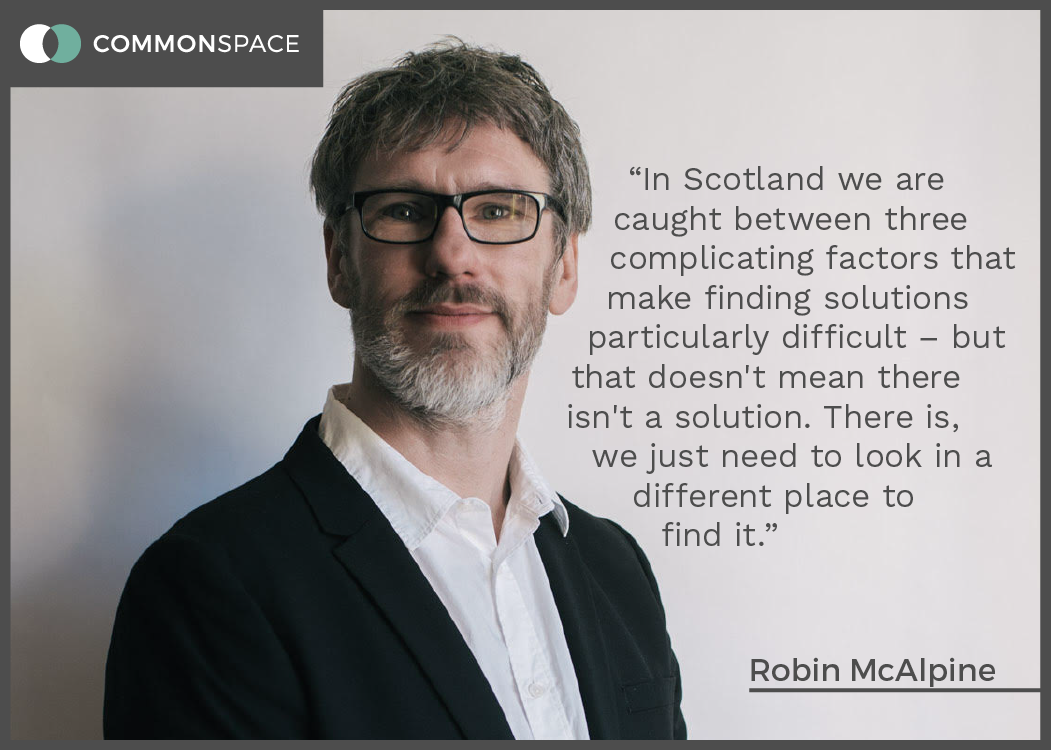 THE current tax debate in Scotland has got me a bit down. I know I have a habit of moaning about the quality of some political debate in Scotland and you may not be wrong simply to write me off as a habitual Cassandra. But what is being written and said about tax isn’t changing my mind.

I certainly don’t deny that this is complicated. In Scotland we are caught between three complicating factors that make finding solutions particularly difficult – but that doesn’t mean there isn’t a solution. There is, we just need to look in a different place to find it.

First, those complicating factors. We begin with the problem that the UK tax system is very badly designed (or very brilliantly designed, depending on whether you’re a taxpayer or a tax avoider).

The single biggest problem is the ease of avoidance and evasion. I won’t throw numbers at you because they’re nicely summarised in Richard Murphy’s paper for Common Weal on tax (which is also a very good primer on a number of the issues discussed here). But the volume of tax lost in the UK is somewhere between nuts and really, really nuts.

It makes progressive fixes for tax difficult because at the un-progressive end of the tax spectrum (where the rich are hopelessly undertaxed), paying tax has become virtually optional. Whether it is a blind eye to tax havens, endless ‘allowances’ or pitiful enforcement, small fixes do little.

The media seems to be in full ‘The Sun, circa 1992’ mode. Screaming the word ‘tax!’ seems to constitute news all by itself.

The second problem is that Scotland is very clearly caught with enough powers to look like it would be possible to do something but not enough powers to really do something. For example, twiddling with bands is all well and good, but not if you can’t also deal with exemptions and loopholes.

This is exacerbated further by behaving like we’re a proper tax jurisdiction when we’re very clearly a region. Tax and borders usually go together – you can’t work in London every day but live in Paris and therefore not pay tax here. But you can live in England, work in Scotland and pay no Scottish tax.

The third big problem is that the UK economy is now so stratified and so much wealth is held as assets that it is turning into an economy that is increasingly untaxable. If all the wealth is hoarded at the top of the income spectrum, broad-based taxes targeting the whole population are ineffective.

(Incidentally, a lot of people might add as a factor the ‘it’s a global economy and we can’t have a wholly autonomous tax regime in one country’ argument, but I disagree with that. There are some limitations, but there is no reason for the fatalism this way of thinking encourages.)

So where are we in Scotland in terms of tax debate? Let’s start by saying that the media seems to be in full ‘The Sun, circa 1992’ mode. Screaming the word ‘tax!’ seems to constitute news all by itself.

I’ve been heartily disappointed with the Herald of late. After what felt like a period of substantial improvement, it is now covering tax like we’re thick. One day it hollers ‘tax bombshell!’ then the next day ‘declining public services!’ in fast rotation as if the two issues were somehow unconnected.

Or it makes massive play of a very small tax supplement on houses which are much cheaper than their English equivalent.

The rich have friends and family and schools and homes and roots, too. They like where they live now – and they’re rich, so can afford it.

This is surely daft. If you’re price sensitive, are you really going to uproot your family and move elsewhere to save a few hundred quid on stamp duty, even if the house you’d need to buy is substantially more expensive? (Hell, the stamp duty saving would barely cover the cost of removal vans.)

But if too much of the media has been immature about this, the politicians haven’t bathed themselves in glory either. Nicola Sturgeon really believes all the dogma about how the rich always run away from more tax, which is another refugee from the mid-1990s.

This has never been shown to be true; rich people are barely more likely to relocate than are the poor, and there is very little evidence their choice of place to live is dictated by tax. The rich have friends and family and schools and homes and roots, too. They like where they live now – and they’re rich, so can afford it.

But dogma rules. So the Scottish Government has done next to nothing – and been criticised by both sides as a result. Which has led to one of the most abject public consultations I can remember emerging from any government. Have a read.

My summary of it goes like this: “We don’t have a vision or a plan for tax so we were planning to do nothing. But then you started bullying us so here’s a table with all our opponents’ tax plans in it. Pick any option you want and we’ll just do it – so long as it means you’ll stop bullying us. Because that’s what’s really important.”

Richard Leonard’s Labour party is starting to look at least a bit more coherent on the tax question, but absolutely not without its own problems.

Let the rich move if they really want to – we’ll collect their children’s tuition fees when they become ‘English’ students.

Leonard says there should be wealth taxes. I’m not going to disagree. For the moment I won’t even dwell on the fact that this isn’t devolved so he might as well put it in his letter to Santa for all the good it will do.

But it also shows the lack of thinking in UK tax policy. The absolute vast majority of wealth in the UK is held in one of two forms – property or pensions funds. You’d be pretty nuts to sit on a lot of money when you could invest in property and sit back and watch your wealth grow.

So this means that even the most wealthy have way less disposable cash than their wealth makes it look. Sure, you could compel them to sell their assets or raid their pension funds. But this is a rather clumsy and very blunt way to achieve tax justice.

The real solution is to tax money properly when it moves – through capital gains tax, inheritance tax, unavoidable income taxes, taxes on assets – and by ending tax breaks to the wealthy (especially pensions, property and inheritance). Unfortunately, these are the things the UK tax system is precisely designed not to do.

Again, the Greens are a bit more sound, but really need to flesh out some of their plans more and, while understandable, to my mind they focus on ‘green’ taxes too much.

So we’re back stuck with blunt income tax powers, which are particularly ineffective in Scotland because of income distribution issues (the hyper-rich mostly live in London). And that’s where the whole debate has been mired, going round and round the problems with income tax.

But there’s a simple fix and it’s beyond me why we’re not talking about it. To be clear, there are ‘signalling’ and moral reasons we should probably put up the top rate of tax. Let the rich move if they really want to – we’ll collect their children’s tuition fees when they become ‘English’ students and they can crack on paying extortionately for the care of any elderly relative. And so on.

Scotland has a hopelessly regressive system of property taxation in which the poorest pay three or four times as big a proportion of their income on council tax than the richest.

Even so, income tax isn’t the way to generate a progressive tax system. To do that you’d ideally look for an immovable asset which is easily taxable, is a strong indicator of both wealth and income and happens by chance to be a kind of asset where taxing it has major positive economic and social impacts.

Let’s, for the sake of argument, call them ‘housing and land’.

If you discount the endemic tax evasion at the very top and the multiple exemptions and allowances, Britain actually has a pretty progressive income tax system (better than the Nordics, for example).

But Scotland has a hopelessly regressive system of property taxation in which the poorest pay three or four times as big a proportion of their income on council tax than the richest. This is easily fixed and would have a much more transformative impact on both public finances and progressiveness than anything you do with income tax.

And it has the added benefit of acting as a break on harmful, spiralling house prices and a disincentive to let productive land sit idle and unused.

Plus it has become very easy – ‘big data’ means that it is comparatively simple to construct an algorithm which accurately derives the value of most housing based on records of house sales in the area and so on. It’s what some of the price comparison websites already do.

Before the Scottish Government had ruled out council tax reform, Common Weal had been working on a proposal for a property tax (while I’m a big fan of land taxes, I find LVT unnecessarily difficult to implement and for people to understand). It would value all the property a person or company owns in any combination of land and buildings.

There is a good tax solution for the Scotland we live in now (and, for my money, an even better one if we were an independent country).

It would update valuations automatically on an annual basis (so no big revaluation exercises). And it is easy to understand – the cash value of your property is the basis on which you’re taxed.

Subject to a realistic assessment of what people can afford to pay, you can raise as much as you want. If you need the money for central government you can offset the size of grants to local authorities. And like all other tax jurisdictions, you can easily create a system of transfers so that wealthy areas don’t benefit more than poorer ones.

And every penny you raise makes the whole tax system more and more progressive.

Despite the fact that this is the solution proposed by the Burt Commission set up by Jack McConnell because it is solid good sense, practical thinking doesn’t seem to be on the table. This appears to be about party politics and virtue signalling rather than a real desire to get this right.

So Common Weal plans to revive our Property Tax work and try and get a paper out as soon as possible. There is a good tax solution for the Scotland we live in now (and, for my money, an even better one if we were an independent country).

It’s just not going to be found in the current debate.