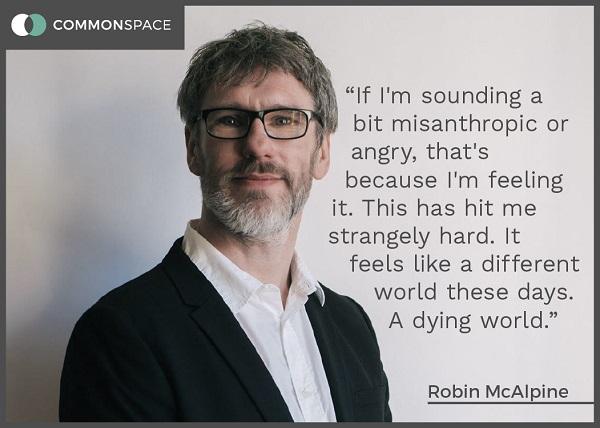 I GREW up in the countryside. I also grew up in an animal-loving family which was perfectly content for us to coexist with the odd spider or daddy long legs in the house.

Bugs and beasties have been a continuous part of my life for as long as I can remember. I never really understood other people’s loathing of them – they seem such fascinating and interesting creatures.

So I must admit that while I already broadly knew these statistics, the recent revelation that a new study has confirmed a 75 per cent drop in the number of insects across Europe still came as a real jolt to me.

The recent revelation that a new study has confirmed a 75 per cent drop in the number of insects across Europe came as a real jolt to me.

This isn’t just because I like beasties. It’s not even just because our ability to survive as a species could be put in serious jeopardy (when lifelong anti-climate change campaigner George Monbiot places this above climate change in the threats to humanity, perhaps we should worry).

It’s that I’m becoming sick of how we behave as a species. Let’s say that bugs were actually useless to humans and that I’m wrong about their intrinsic value as creatures – even so, where do we get off exterminating, annihilating, causing the mass extinction off an entire genus of life on earth?

Apparently the use of pesticides and industrial farming methods have not been ‘proved’ to be the cause of this. But the fact that we actually declared these animals ‘pests’ and then gave them their own ‘icide’ (as in to kill) could be a clue here.

If I produced a gas which was called ‘homicide’, sprayed it into the air in industrial quantities and humans started dying out, what conclusion would you draw? More research needed?

We’re in the middle of earth’s sixth mass extinction event. At least half the species that were alive in 1970 no longer exist. It took over a hundred years for that many to die out during the extinction event which wiped out the dinosaurs.

We’re in the middle of earth’s sixth mass extinction event. At least half the species that were alive in 1970 no longer exist.

But we’re the good guys because we’re in Scotland, right? Best climate change targets in the world and all that, right?

Keep telling yourself that if you want, but it’s not true. When we set targets in 2009 they were world leading. They aren’t now – a number of countries are setting zero emissions targets, a 100 per cent reduction by 2050. We’ll only be at 90 per cent by then under current Scottish targets.

And even if we were world leading, it’s still not enough. The world is still waiting on the Intergovernmental Panel on Climate Change (IPCC) to revise its estimates of what humanity has to do to meet even the inadequate Paris Accord targets.

Until then we should assume that we need to halve emissions every decade – and probably be aiming to be achieving net zero emissions by 2040.

But we’re the good guys because we’re in Scotland, right? Best climate change targets in the world and all that, right? Keep telling yourself that if you want, but it’s not true.

But what bothers me most about this is that we’re in classic ‘liberal’ territory here; set targets to show just how much you care, but don’t actually start doing the things that would achieve that target. Because, you know, ‘something’ will turn up before 2030. And we’ll not be in charge anyway.

So for example, the Scottish Government takes a bold step by pushing a comparatively early date for banning the sale of new vehicles that run on fossil fuels. Great.

But all the rumours are that the big housing developer lobby is winning the argument to take the gains from this transport move and allow the house builders to reduce their own targets by the same amount.

Again and again, that turns up as the problem – there is no shortage of warm words about how we want to be a better, fairer country, but as soon as the lobbying pressure comes on it’s the line of least resistance that wins out.

So we get a government response to Scotland’s housing crisis which appears to be written by the big commercial interest which is currently lobbying against the building of social rental housing. Guaranteeing big developers’ profits is a scandalous use of public money. But that’s what we’re doing.

There is no shortage of warm words about how we want to be a better, fairer country, but as soon as the lobbying pressure comes on it’s the line of least resistance that wins out.

Which means the remaining bees and butterflies should fear the fact the big industrial farming lobby is currently twisting the Scottish Government’s arm to reduce further the insubstantial restrictions on the pesticide frenzy post Brexit.

Let me give you just one other example. We’ve got ducks and recently one of them had to be kept inside for a week after an operation. Every day, that duck stood for most of the day at a place where he could see out the patio window.

Because every day the other ducks sat outside and pecked the window for him. They seemed to genuinely miss their brother; he seemed distraught without them. These are beautiful, social, clever animals. They do not belong in battery cages.

And yet cheap, fast food mongers McDonald’s has better animal welfare standards than the Scottish Government. McDonald’s doesn’t source anything other than free-range eggs; Scotland’s public procurement rules still allow for the use of eggs from caged hens. To save a few bob.

I really am tired of this. It’s the absolute conviction of the western liberal that what really matters is their values. And when their actions don’t live up to their values, that’s just pragmatic, grown-up politics.

It’s the absolute conviction of the western liberal that what really matters is their values. And when their actions don’t live up to their values, that’s just pragmatic, grown-up politics.

And bees and a survivable climate and humane treatment of animals may well be desirable, but industry and GDP growth is what really matters. That and keeping lobbyists happy.

We can have two out of the three, but not the third. We can keep the lobbyists happy and grow GDP – for a while. But we risk destroying life on earth as we know it.

Or we can achieve growth and prosperity based on changing our economy for a survivable future – but it won’t keep the lobbyists happy.

I’ve written about how reducing land prices and improving the quality of housing has win-win outcomes. Prosperity and improved environmental and social outcomes can be brought together.

We can alter the subsidy regime for agriculture post Brexit to encourage farming to move away from the damaging industrial model to a much more sustainable ecological model. And we can still produce plenty great food and actually improve farm incomes.

We can keep the lobbyists happy and grow GDP – for a while. But we risk destroying life on earth as we know it.

We can take proper control of energy generation and push a process of building publicly-owned, zero-carbon electricity. We can put serious effort into retrofitting houses with better insulation and, where possible, green district heating infrastructure.

We can move to a future of driverless electric vehicles (which is where we’re going anyway) and make this a first-rate clean, public, affordable transport and distribution system.

This and much more we can do. It can create real prosperity and a better world. But it cannot happen if our focus is on giving the industries we already have what they want in the form that they want it now – which is always about the fastest possible profit.

I feel this acutely in Scotland. I’m really sick of being chuffed that we’re a bit better than average, or one click up from a near competitor in performance, or that we’ve got decent targets but no action plan to implement them.

Because we’re in a whole world of privilege up here. Despite tough times, we’re still a very rich country in a part of the world with very survivable weather events (whether it feels like that or not…). And even more than that, we have a left-of-centre, pro-environment public.

Or we can achieve growth and prosperity based on changing our economy for a survivable future – but it won’t keep the lobbyists happy.

Technically, Scotland has for many years voted for parties who say they are serious about climate and environmental issues. Some countries have the wealth, some have geographic advantage, and some have a public political will. Scotland has all three.

In fact, if we don’t go well beyond the average, who is going to make up for those countries without our advantages who can’t reach even average as quickly as us? Or if we’re not really going to lead, could we at least stop saying that we are so we can live in the discomfort of our own hypocrisy?

If I’m sounding a bit misanthropic or angry, that’s because I’m feeling it. This has hit me strangely hard. The ‘moth snowstorm’ which accompanied a family drive after sunset on a warm summer evening when I was a child remains an important part of my childhood memory. It feels like a different world these days. A dying world.

And yes, a few years ago I had a relentless aphid problem and have a ‘bug spray’ among my gardening things (though I’ve not used it for years). In the west, we’re all hypocrites. So I’ll find out how to dispose of it safely and it will be gone this weekend and will never be replaced.

And then what? More talk of our ‘values’? While we turn a blind eye to mass extinction? I wonder if one day a future historian will write that yes, Donald Trump was an unhinged comedy idiot – but Scotland should have known better.

Will it take the last flutter of the last butterfly wing before we understand what we’re doing?