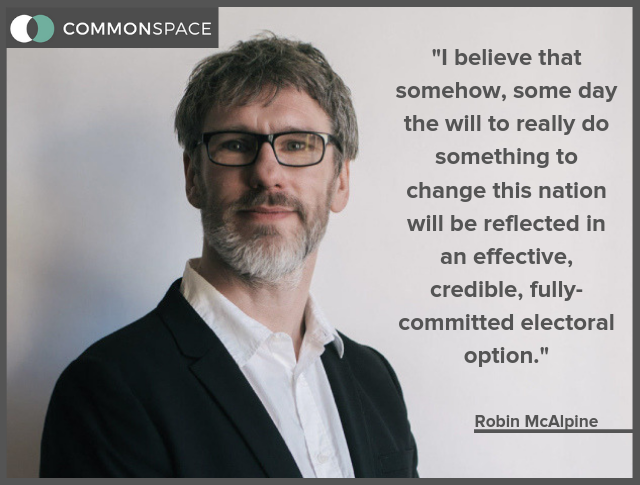 GERRY HASSAN wrote something in his piece for the Sunday National that rather gnawed its way into my head. It’s simply this; he pointed out that left and centre left Scots are poorly served by current Scottish politics.

On the face of it this seems crazy given that five out of six of the political parties ever elected to Holyrood are at least nominally somewhere on the left-of-centre part of the political spectrum. Unless I’m mistaken, the vast majority of their voters think they’re voting for social democracy or socialism.

So how can they be poorly served? With both that level of choice and that level of electoral dominance, people south of the border often think we all live in a social democratic wonderland up here.

And yet when I’m asked eagerly to explain all the great things that this wonderland has delivered, something odd happens. I find myself best able to say what the Parliament has NOT done.

And its done some progressive things, from the right to roam and free care for the elderly to scrapping tuition fees for universities and increasing the amount of available childcare. Banning smoking indoors, minimum pricing for alcohol and lowering the drink drive limit are progressive if rather technocratic.

Plus for Common Weal there has been one genuinely radical step; the creation of a Scottish National Investment Bank. I’m not sure people understand what a challenge to the ideology of a financialised economy it has the potential to be – nor how bloody hard it was to make it happen.

But that’s 20 years of work and it is hardly transformational. Getting serious, transformative action in areas like land reform, housing, energy, public procurement, transport, local or participatory democracy, poverty or core economic strategy has yielded next to nothing.

And there is a noticeable pattern to all of this; most of the good stuff happened in a short period when Henry McLeish was First Minister or in the first six months of a new administration. There seems to be a culture where you have to put one eye-catching thing in a manifesto to get left voters, deliver it quickly and then keep your head down for three and a half years.

So why has this happened? I think it’s down to two things; the state of the parties internally and the way they interact and relate to each other.

Then the SNP won in 2007 and I’m afraid Scottish Labour developed a new mission, based around pure, burning hatred. Rather than regroup and become ‘for’ something they saw the SNP as fundamentally illegitimate.

From there it has been a well-worn story of turning from the party of devolution to a party of union. The only thing I think people miss is, again, how the role of anger and hatred towards the SNP played a large part in blinding them to the implications of forming a close coalition with the Tories.

And now? You’ve got the frankly anti-left stance of the ‘anti-nationalists’ like Ian Murray. You’ve got the unbelievable ineptitude of Richard Leonard who struggles to sound like he knows what powers are actually devolved to Scotland, the Holyrood-based leader whose real mission is Westminster. Between them they offer little that’s credible to the left.

We’ll just skip over the Lib Dems with the obvious point that Willie Rennie doesn’t seem to have a political agenda much beyond jumping on any issue that might give him even a little profile for a brief moment. And that’s it for left unionists.

But the real business is meant to be happening in the indy parties – after all, that’s where all Labour’s erstwhile supporters and voters have gone. So why are we ill served by them?

Here the problem is also internal; the SNP has been so centralised that it is incredibly tightly controlled by a tiny number of people and they have defined themselves as being ‘mainstream’ – but with a capital M.

READ MORE: First extensive survey of Yes campaigners finds they are far to the left of the SNP

In fact in the early months of the current regime its ‘people’ were sent out to make clear that they had no truck with ideas coming from Common Weal, exactly because we weren’t ‘mainstream’ enough for them.

To this day the Scottish Government media team will tell you (very happily) that while Common Weal ideas may be very popular with their party members, they have no influence over Government thinking.

That’s about right; we’ve had a whole series of major wins but they all came from working with the party membership, civil servants, government advisers and some individual Ministers who are more sympathetic.

And it’s probably important to be clear about what ‘mainstream’ means here. It basically means status quo with some gestures to the left and right. And since there isn’t all that much right-wing pressure for change, it feels like a large part of the identity of this Government is about how much it has resisted agitation from inside and out to be more left wing.

You might think this is just McAlpine being McAlpine, but it’s not. While I clearly don’t speak for ‘progressive Scotland’, I do speak with them a lot. In private their assessment of the progressive credentials of this Government is scathing. (I’m talking about the big, mainstream progressive organisations here too, not just the radicals.)

READ MORE: Jordan Daly: Why parliament may not be the best place for Scotland’s pro-indy left

Still, there is the Greens and the SSP. Without much prospect of getting elected politicians just now the SSP struggles to feel like a viable option. So if we’re disillusioned we should be flocking to the Greens, right?

But we’re not. The Patrick Harvie era started more than ten years ago when the Greens were a six-per-cent party. I’m afraid that more than a decade on there isn’t enough of a sense they know how to progress to being a seven-per-cent party.

It’s a little hard to see what the Green’s parliamentary or electoral strategy is. And it’s quite difficult to argue that they’ve had any kind of transformational impact as a parliamentary party.

I think part of that is a bit of a deficit in ‘tradecraft’ – the Greens haven’t been wiley enough. And too often it has felt like value-signalling has substituted for a really coherent, transformation story about Scotland’s future.

Now if there’s something I kind of hate it’s the ‘a pox on all your houses’ attitude because it’s just destructive. All these parties retain substantial elements you’d most certainly want to keep in Scottish politics. They have done good things – but, from a left perspective it feels like less than the sum of the parts. For me, that’s a real tragedy. There was and is the public will to really do something.

It doesn’t need to be like this. All political parties have major internal problems when you look at them closely enough; what Scotland struggles with is the second point – how they interact with each other.

The Green leadership seems to think the SNP is the real enemy and the SNP sometimes responds in kind. Labour is utterly convinced the SNP is the enemy but won’t join with the Greens because they come out in a rash if they meet someone who supports independence. The SNP hates Labour in return – and with no less feeling. The Lib Dems just want someone to love them.

Scotland’s left almost feels let down by too many parties who want to change Scotland but only after the important business of destroying their opponents is completed. The rank and file want more, but they can be forced into a holding pen by raising the risk of the real bogeyman – not poverty and environmental collapse but ‘the fucking’ (and then just fill in the name of the other lot).

This is an unhealthy state for Scottish politics. It’s like someone asked the Jets and the Sharks to form a coalition to deliver a national consensus. At my darker moments I worry that this won’t be resolved until independence or the final defeat of independence. I worry that, by then, public disillusionment may have moved the consensus elsewhere.

But I believe that somehow, some day the will to really do something to change this nation will be reflected in an effective, credible, fully-committed electoral option. I really can’t wait. Really.