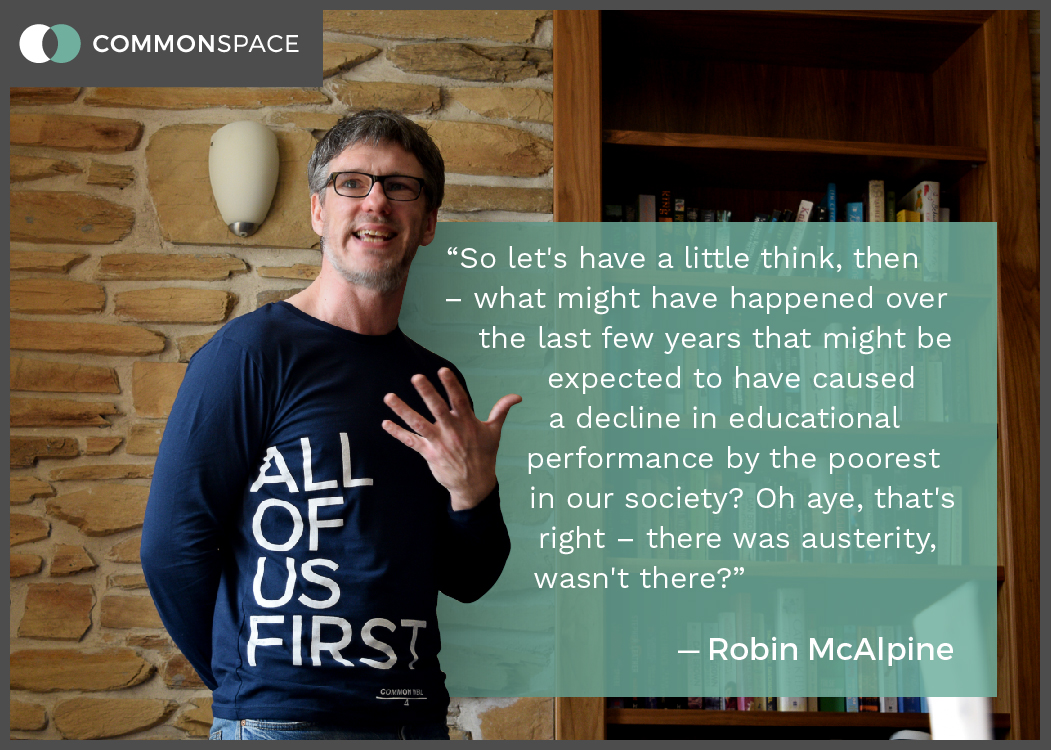 THE coming week is likely to be a slightly uncomfortable one for the Scottish Government over education. The EIS AGM starts next Thursday and is inevitably going to lead to a lot of individual members of the teaching profession expressing unhappiness. I doubt they're going to find it hard to get an attentive ear from the Scottish media.

There's no doubt that some of the criticism is legitimate and it is to be hoped the Scottish Government will pay attention. But at the same time, I think it is important that criticism is tempered by some positive reinforcement, because if it isn't, it might just set education policy in Scotland off in the wrong direction.

There will be two strands of criticism from EIS members. One strand will be about administrative, funding, staffing and employment issues. These kinds of issues will be with us so long as humans organise themselves into groups and while it is important that they are resolved as best as possible and in a mutual manner, they are not the issues I want to discuss here.

I think it is important that criticism is tempered by some positive reinforcement, because if it isn't, it might just set education policy in Scotland off in the wrong direction.

Rather it's the second strand of criticism – on policy – where I think the Scottish Government faces the greatest risk in the long term. Its the agenda of introducing testing into primary schools and the early noises which suggest some kind of new revolution in the schools system.

Because it's not just the teaching profession which is unhappy – it's more or less everyone bar the Tories and parts of the unionist media. Scotland's educational academics are mostly bemused, parents are distinctly uncomfortable and many SNP members are frankly alarmed.

Similar proposals are more advanced in England, so while it isn't possible to read directly across the two different education sectors, we can gather instructive lessons – such as mass protests by parents and organised boycotts. It's hard to see why anyone would want that kind of trouble in Scotland.

Except it's not. It's quite easy to see who wants that kind of trouble in Scotland – and it's the very people who seem to have bounced the SNP in this direction in the first place. Because as far as I can tell this whole affair has been the product of sustained campaigning by the media and the Tories.

The Scotsman, in particular, has been rattling on about the 'attainment gap' for a long time now (because the neoliberal Scotsman has, since its hard-right days under Andrew Neil, been constantly concerned about issues of social inequality in absolutely everything apart from the articles it publishes in its pages).

As far as I can tell this whole affair has been the product of sustained campaigning by the media and the Tories.

So it wasn't going to let new education statistics pass by without engaging in talk of crisis and failure. In the last two years the number of pupils in P4 and S2 who have been assessed as performing well or very well in numeracy dropped by two per cent and those in P7 have stayed at exactly the same rate. Two out of three pupils leave primary school being good or very good in numeracy.

The number who are failing to reach an adequate level for an 11 year old? Three per cent. At P4 only 0.4 per cent of pupils don't reach the adequate level (though in a problem consistent across the western world, by S2 the number of people not reaching an adequate level rises to over one in three).

And unsurprisingly, when you delve deeper into the figures it turns out that the children of the wealthiest parents have actually done a bit better while the majority of kids are doing exactly the same. It is the poorest kids who have displayed a decline in results.

So let's have a little think, then – what might have happened over the last few years that might be expected to have caused a decline in educational performance by the poorest in our society? Oh aye, that's right – there was austerity, wasn't there?

This is what has annoyed me so much about this battle – it is intellectually bereft. We are told over and over by the rightwingers that it is 'Scotland's schools' or 'Scotland's education system' or 'Scotland's teachers' which are somehow at fault, a national disgrace, letting our children down and so on.

When you delve deeper into the figures it turns out that the children of the wealthiest parents have actually done a bit better while the majority of kids are doing exactly the same. It is the poorest kids who have displayed a decline in results.

Except if that was true then you'd see performance outcomes which were spread evenly or randomly across 'schools' or 'the system'. So unless the curriculum is being implemented differently for poor pupils or all the 'bad teachers' are being sent to the schools in deprived areas, we can immediately conclude that the problem seems to be a social and economic one.

Which of course it is – as virtually all the research and academic evidence from the last 60 years would confirm. Neither schools nor teachers take successful young children from poor families into P1 and in the space of four years by P4, destroy them and their academics ability.

Because the single biggest impacts austerity has on the poor are (at the sharpest end) hunger and cold and (across much larger swathes of the population) stress and anxiety. And hunger, cold, stress and anxiety don't make for good learners, nor do they assist supportive parenting.

Now I can see why a hostile media wants to draw the Scottish Government into this area. It has been trying to manufacture crises in Scotland for quite a while now (note the Herald's branding of 'NHS in crisis' which went on for what seems like half a decade and which has been picked up and believed by, well, no-one else at all).

You only call it 'the attainment gap' if you want to divorce cause from effect and blame parents, pupils and schools rather than the social and economic crisis that has been created in Britain over the last decade.

And the places it has been trying to manufacture crisis are specifically ones where policy-makers are forced to micromanage the impacts of massive economic and social changes being implemented by a hard-right UK Government (particularly health and education). There is next to no mention of the causes of these problems or the fact that the Scottish Government has very little power to actually tackle the causes head-on.

So I can completely understand why that hostile media is standing at the other side of a giant pool of quicksand shouting 'over here, over here'. What I can't really understand is why the Scottish Government is so quick to run towards them.

Because the direction of travel in which the Scottish Government has been taking education policy in Scotland over recent years is not only basically right, it is very widely supported as being right. There are always a world of questions about the implementation of any policy and big change is never easy, but Curriculum for Excellence is the right approach for Scottish education.

I have my own opinions about what curriculum content we will need in the future – memorising and testing are skills which seem outdated in the modern world where creativity, design, problem solving and group working are much more important than asking kids to be able to recall information that the rest of us are googling.

But Curriculum for Excellence is the right vehicle for developing and delivering that change (though I agree with teachers who rightly complain there is just too much micro-level assessment paperwork). Now it almost seems at risk not only before it can be properly assessed but before it is even properly implemented. Mandatory testing for primary school children is not only outside the framework of the new system, it is a sharp move in the opposite direction.

There are always a world of questions about the implementation of any policy and big change is never easy, but Curriculum for Excellence is the right approach for Scottish education.

This is why I am so bemused. If the Scottish Government had simply responded 'we will do what we can to provide remedial services for poorer children let down by the UK's vicious anti-poor-family policies but we're on the right educational path and there is only so much mitigation we can do' it would have had most people's support.

Instead it seems to have walked into a trap. Because make no mistake, I am one of many people who has a child at primary school who is very angry about this testing agenda. The children in our local primary are happy, rounded, enthusiastic and enjoy school. Changing that environment into a regime of testing is not what I want for my child or for Scotland's children.

(And don't tell me that it won't change the school environment because that would be naïve – you think the newspapers aren't going to try and create some kind of league table or annual statistics-fest which will one way or another lead to pressure on teachers to do whatever it takes to coach children to produce better test results?)

Testing doesn't work and is a philosophical U-turn which is both unnecessary and unpopular. Literally no-one seems to understand how this policy emerged or why it seemed to have been made up overnight with virtually no consultation or discussion with anyone.

If the Scottish Government spends the next five years sinking into the quicksand of administrative issues in education and the NHS rather than trusting teachers, doctors and nurses more, it's going to get in trouble.

So the teaching profession will be right next week when it speaks out strongly against this policy and the strange diversion it seems to have imposed on schools policy in Scotland. But an all-out war with the Scottish Government will just back people into corners and deliver what the rightwing really wants – an interfering government mucking about with schools policy. Because this is a hole from which few emerge alive.

John Swinney is a politician with an envious reputation and track record of effective government. He has the wit and the political capital to sort this out, as long as he stops digging. It will help him if, from time to time, we can all remind ourselves that what we've been told about Scottish education isn't really true and that the direction of travel of education policy is broadly right.

Because if the Scottish Government spends the next five years sinking into the quicksand of administrative issues in education and the NHS rather than trusting teachers, doctors and nurses more, it's going to get in trouble. And if this diverts it from pursuing big, transformative social and economic policies, its opponents win hands down.