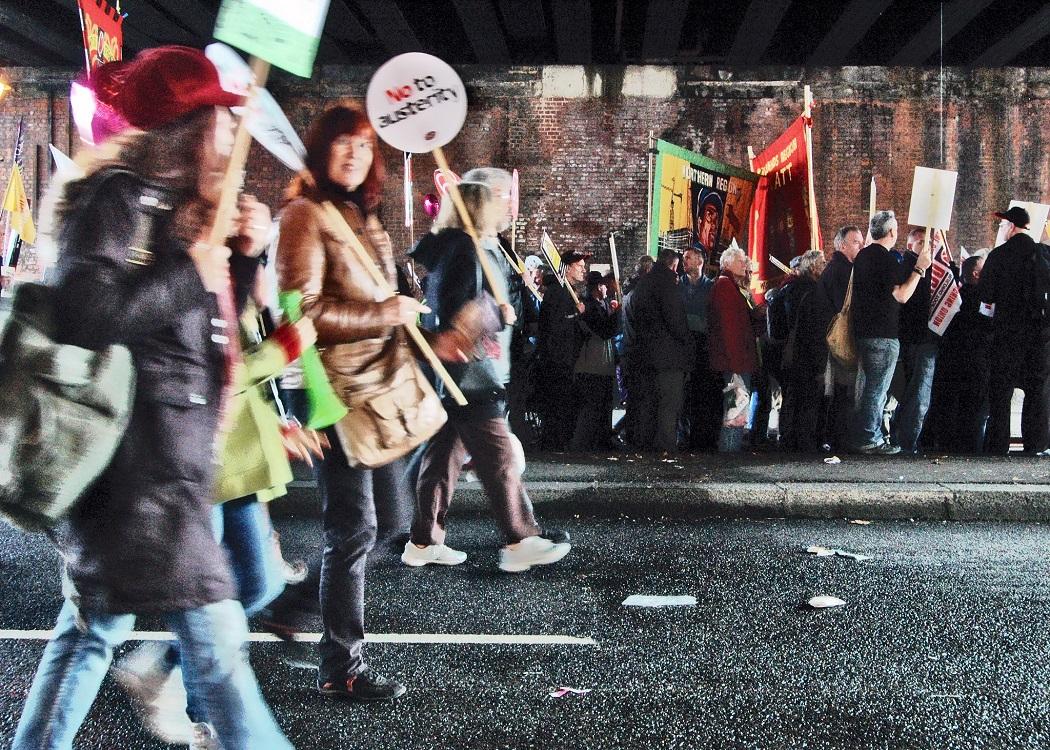 HOW would my friends in the trade unions respond to me taking the following position:

Appalling, right? But how does this differ from Unite or the GMB’s position on Trident renewal?

Me and plenty others will stand by the unions every step in their campaign against the Trade Union Bill. What, in return, do those of us who abhor nuclear weapons get?

I abhor the Trade Union Bill . It is a shocking, cynical, anti-democratic piece of legislation which is designed to remove basic freedoms in Britain for the sole benefit of the Tory party, its big business funders and its neoliberal hegemony project.

It needs to be stopped, and there is no point those of us who supported independence from a left wing perspective crowing about having told you so – this will affect the lives of everyone living in Britain (whether unionised or not) long before we get another referendum.

So me and plenty others will stand by the unions every step in their campaign against it.

What, in return, do those of us who abhor nuclear weapons get? Trident is a barbaric instrument, the only function of which is the mass murder of ordinary working people. Every warhead leaches investment from public services and the jobs that they create.

They contribute to a geopolitics of mistrust and grievance. There is no credible case for their retention or use that doesn’t involve the weirdest of logical contortions (‘but what if aliens attack or France turns into a rogue state?’). They – quite reasonably – prompt others to want to have their own. And they symbolise an imperial mindset which is at the very least a key contributing factor to the world’s problems right now.

The Trade Union Bill: What it is and why you should care about it.

Unite and the GMB, however, can put these thoughts on the back burner. They have more important priorities than world peace or a sense of justice – they’re both in competition with each other to sign up defence industry workers. Support for weapons of mass destruction is just a marketing ploy.

But at least they’ll use that money for good causes. For example, in Scotland they will use much of their money to try and unseat and overthrow the party that two thirds of their members voted for. Unite has offered to be a ‘critical friend’ of the SNP (which their own internal party research suggests was the choice of those two-thirds of members). This critical friendship will begin by them trying to bring down that ‘friend’ by giving all their money to its biggest opponent.

And let’s be clear here: this isn’t just positioning or a comment here or there put out as a sop to one section of their membership. By far the most visible impact these two trade unions have sought to have over the policy of the UK Labour party is to prevent Jeremy Corbyn ending Labour’s support for Trident renewal.

At the party conference in Brighton they used every trick in the block-vote book to make sure there wasn’t even a debate on the subject. And the money they will be putting into the Scottish Elections will be real money which will be used to fund all the usual anti-SNP propaganda.

Unite and the GMB have more important priorities than world peace or a sense of justice – they’re both in competition with each other to sign up defence industry workers.

However, I’d be absolutely right to point out that this has made not a blind bit of difference. It is Unite in London and Labour in London which will make the decisions. Scotland can keep voting away until its heart’s content, just so long as Trident is renewed.

What makes this even more dispiriting is that these developments have hardly been met with howls of surprise. ‘Trade union fixers get what they want, wishes of members overturned’ – it’s not exactly news, is it?

I know lots and lots of really good people (many of them my friends) who are working tirelessly in the big trade unions trying to defend the rights of workers while also trying to modernise and reform their unions. I know some of the younger ones remain optimistic. I know some of them think that because the unions are under such a fierce attack from the Tories, allies like me should refrain from being critical in public.

Thing is, I’ve now heard 20 years of reasons why criticism of trade unions should never be made. ‘We’re trying to end 18 years of Tory rule’, then ‘if we’re just a little patient Tony Blair is going to come good for us’, then ‘like it or not we can’t destabilise a Labour government’, then ‘we’re trying to defeat the Tories’. And so on.

But with each passing reason the trade unions have got weaker, the Labour party became more lost and the politics of Britain have moved further and further to the right. GMB gaffer Paul Kenny got his Knighthood, though.

We must constantly remind ourselves why trade unions are so incredibly important to our society. The owners of finance and capital have enormous power as a result of their ownership. They will use that power as a cartel to ‘negotiate’ the best possible deal for themselves.

It is Unite in London and Labour in London which will make the decisions. Scotland can keep voting away until its heart’s content, just so long as Trident is renewed.

This means skewing laws, business practices, government action and pay levels in their interests. This in turn will fundamentally alter society in their favour (and this of course means against the interests of the vast majority of citizens).

To create fairer, more socially just outcomes, people who work need to be able to exert their own power, to be able to negotiate if not on an equal basis to the owners then at least on as equal a basis as can be achieved. The only way to do this is for workers to organise.

We shouldn’t have to remind ourselves – but it’s been fairly difficult to square this crucial role of organised labour with the policy actions of the trade unions over the last couple of decades.

While Blair deregulated and financialised the economy – with all the inequality and low pay that has embedded in the British labour market – the big trade unions focussed on a merger frenzy, battling each other to build the biggest mega-union.

And it really isn’t said enough – over this period few did more to cement Blair’s control of the Labour party than the unions. They had very substantial influence over both voting within and the funding of Blair’s Labour. Largely, they used that influence not to change the party but to silence criticism.

I write all of this with great sadness. One of my very first voluntary acts in politics (OK, semi-voluntary – I was 12) was standing in high streets of Lanarkshire towns with a bucket collecting for the miners. When I was 16 I read The Ragged-Trousered Philanthropists and it made the most incredibly deep impression on me. The importance of organised labour has always been a foundation stone of my politics.

Scotland is a country in which there is plurality in progressive politics. Why can’t we have a trade union sector which recognises that plurality and behaves accordingly?

And I don’t feel particularly good having a go at Unite boss Len McCluskey whom I’ve met a couple of times. He’s a much more intelligent and thoughtful person than the media give credit for. Given his position, he was exceptionally balanced on the independence question and quite clearly indicated that if he was voting he’d probably have voted Yes. That was brave.

He is doing sterling work in trying to influence the shape of the Labour party in London. I doubt he is backing Trident through anything other than gritted teeth.

Many of the smaller unions have been more inspiring. Disaffiliation from Labour gave the RMT a new lease of life, and I thought PCS was pretty exemplary during the referendum. The one genuinely Scottish trade union (the EIS) has been mostly excellent for its members.

The STUC has done really important work in recent years, even when restricted by some of its members. Ordinary trade union members are activists who have led on everything from backing a Yes vote to fighting against austerity and battling for rights for refugees. None of this changes the fact that it looks like Unite and the GMB are going to impose Trident on all of us (or at least put the final nail in the coffin).

During the referendum I spoke at some pretty hostile meetings (to rooms of Tories in the Borders or to a meeting with an aggressive Orange Lodge presence in Larkhall). But the most reactionary meeting I spoke at by far was one organised by the defence trade unions. No argument I made about society or poverty or equality seemed to have any traction at all. They were well paid and that was all that mattered.

Independence supporters, SNP voters, the large anti-nuclear movement in Scotland – they have a right to be properly represented by powerful trade unions, too.

They absolutely have a right to be represented and heard. But why are the interests of every single public sector trade union member in the country being set aside in their narrow interests? Let the defence sector start its own trade union and let their voice be proportionate to the size of their own vested interest.

Scotland is a country in which there is plurality in progressive politics. Why can’t we have a trade union sector which recognises that plurality and behaves accordingly? I don’t believe the silence of critical friends is doing the trade union sector any good whatsoever.

Independence supporters, SNP voters, the large anti-nuclear movement in Scotland – they have a right to be properly represented by powerful trade unions, too. Failing to recognise this will do these essential institutions of our nation no good at all.