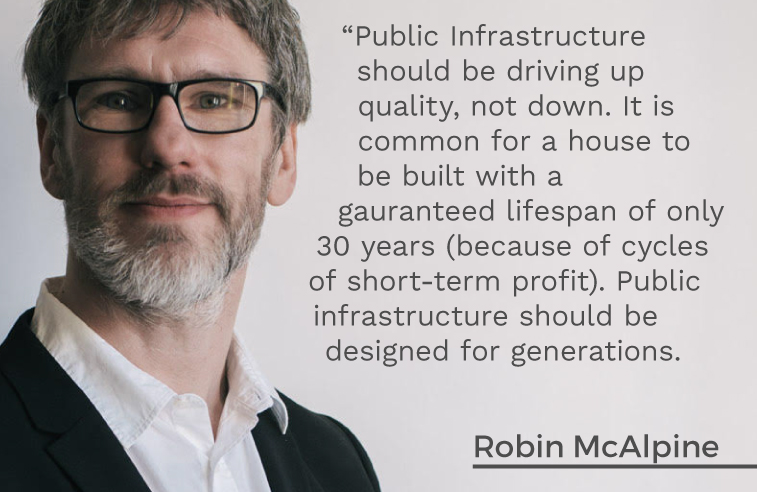 HAVING seen the debate in Parliament on a National Investment Bank go well, Common Weal is now working towards our next milestone on a National Infrastructure Company – which is a motion to SNP conference in June (we’ve had meetings with other parties too).

But if an investment bank doesn’t exactly sound like the radical step forward it is and is perhaps not intuitive for a lot of people, an infrastructure company may be even more obscure.

So what is it and why should you care?

Roughly its about four things – quality, cost, coordination and democracy. It is about making sure that when we build schools or hospitals, roads or bridges or any other piece of public infrastructure that we do it properly, fit for generations to come.

It’s easiest to understand in terms of cost and democracy. What we have now for an awful lot of public infrastructure is an opaque system that costs much more than it should. It’s almost always knowns as PFI, and we still have a variation on it in Scotland (though with a cap on profits).

When the public wants to build something it puts out a tender to private sector companies and they bid to build, own, operate and rent back the relevant infrastructure. The utterly crackpot theory behind this was that the private sector managed risk better than the public sector.

READ MORE – Parties back new investment bank at Holyrood, but squabble over what and who is to blame for economic weaknesses

Well, that was the justification. Actually, it’s hard not to believe that it was a combination of ‘public equals bad’ ideology and blatant profiteering. The case on why it is so economically bad for the public purse is so well documented it’s hard to believe it happened.

There are so many articles on the cost of the rip-off you can just chuck ‘PFI overpriced’ into a search engine and spend all day reading in horror. And the idea that it’s ‘worth it’ so the public doesn’t carry the risk is utterly debunked in this Common Weal paper by Jim Cuthbert.

These contracts were immediately treated as ‘financial products’ which were traded by financiers who milked them for every penny (hence the crazy costs). No sane public authority would have used them – if Gordon Brown hadn’t made it legally mandatory.

And of course everything is utterly secret – public money and democracy be damned. ‘Commercial confidentiality’ has simply protected this scam by hiding the details for years and years. That in itself is a scandal.

Public infrastructure should be owned by the public, not by shady ‘consortia’ (this implies a number of enterprises actually working together, not a front company for financiers). And it should all be democratically accountable.

If it was, the public could borrow to pay for it at the best lending rates available to almost anyone – the public sector is a safe bet.

This greatly reduces costs, not least because fiddles and tricks can’t be hidden away.

But if that was the only aim, we could just go back to public authorities borrowing and managing their own projects – and actually, that would still be a part of the system Common Weal envisages.

It’s just that cost and transparency have not been the only victims of PFI – so has quality. Whether it is schools falling down in Edinburgh or sports centres falling down in Dumfries, the era of PFI has seen the quality of building work fail to meet reasonable (never mind highest) standards.

If we did this right, every new public building would be a ‘learning experience’ for every other new public building. What works, what is the best new technology, what is a great experience for users, what lasts, what is real value for money, how can they enhance their surroundings, how can they promote health, quality of life and wellbeing, how do they protect the environment?

Instead we’re trapped in a financier’s game where it’s only about profit, not quality or longevity.

We need to get better and better at everything we do, not strip more and more profit out of things built for the public good. We need a ‘centre of excellence’ for public building.

And we need to make sure that people building infrastructure are talking to each other and planning collectively. Dozens of different private consortia working in secret, shielding information from each other is not the way to do it.

So how does a Scottish National Infrastructure Company help with all of this? First, it needs to succeed not by being compulsory but by being better than the alternative. Local authorities and other public bodies should WANT to work with it.

And it should not become a ‘landlord’ – it should be helping public bodies, not taking over ownership of their assets. This is not a ‘trick’ to take borrowing off the books.

Which means it’s also not a shortcut to funding infrastructure. Even the ONS is sick of PFI game-playing and has said the cost of all these schemes must be brought on the public books. A public body must be able to pay for what it builds and their total commitment in borrowing must be manageable.

(Underfunding of local government in Scotland is a mistake we’re going to regret. Government sometimes seems obsessed with initiatives we’ll never notice but not to value local authorities which impact peoples lives directly every day.)

When a public body wants to build something it would be able to go to the National Infrastructure Company. It would work with the National Investment Bank to produce a series of what are effectively ‘off the shelf’ financing packages, tailored to public sector infrastructure needs.

It would then continually develop expertise in creating the specification for great public buildings designed for their users. It would develop first-rate project management capacity. It would create frameworks to help with commissioning.

This would include ensuring that the maximum amount of economic impact is retained locally by helping to procure from local architects, builders and supply chains wherever possible.

And if what it offered could be bettered by the public authority elsewhere (for example, if they could find better borrowing terms), then the public authority would be free to finance projects like that. A National Infrastructure Company would have to work for its role.

But that role exists. I fear the future will look at us as a shoddy, lazy generation. I very much doubt if there is a lot of what we’re building now that will last 100 years. I know of buildings built in the last decade (to replace solid Victorian buildings which served the community for well over a century) which people are already talking about as not being fit for purpose.

And our children would have every right to ask why we lumbered them with crazy debts on this substandard building – and why we went along with it and didn’t do more to challenge it.

Scotland has a major problem with investment, even discounting the Tory’s embarrassing arithmetic errors. We simply don’t invest enough in our country. We need a new investment landscape.

The National Investment Bank creates a way to finance businesses and projects in a better way and in the public interest. A National Infrastructure Company will then draw on that potential to improve everything the public builds.

It’s not a magic bullet – it is a sensible piece of a jigsaw that will give us the power to improve our lives now and reverse our shoddy legacy for the next generation of Scots.

That’s why it has such a great range of high-profile supporters. I hope I’ve helped to persuade you to be one too.