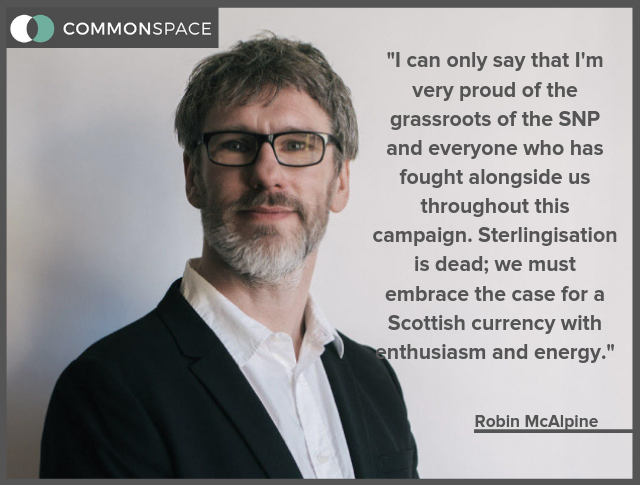 I HAD been looking forward to writing a happy, conciliatory column this week saying ‘the currency debate was tough but we’ve ended up with a position that can keep everyone together so let’s move forward’. But for me to do that, those who lost on Saturday have to demonstrate the good grace to accept they lost.

This is essential if we want to pull together. Common Weal went out of its way not to put out gloating or self-congratulatory statements after Saturday’s vote precisely to make it easier for everyone to unite.

So why has Andrew Wilson decided to take a Scorched Earth approach whereby if he can’t get his pet currency option through he’ll drop a quite unbelievable list of quotes, the only purpose of which is to do severe harm to the notion of a Scottish currency and by extension to the case for Scottish independence?

And why is Derek MacKay chucking a full-blown Verruca Salt? (“But I WANT an Oompa-Loompa!!!”)

Let’s not kid on here; having placed an unreasonably long motion which was designed to be difficult to amend, after picking amendments which were deliberately designed to conflict and split the vote, having thrown the kitchen sink at telling people the leadership expected compliance, with the full support of the National, with the payroll vote, the odds were against those of us supporting a proper Scottish currency.

And yet delegates voted for the clearest amendment that gave the plainest sense that Sterlingisation was not acceptable and that a currency should be introduced as fast as possible.

If you doubt what was voted for, just listen to Tim Rideout’s speech when he moved the amendment. He utterly demolishes the six tests; this is what conference voted for. There has been, from day one, an incredibly strong majority of independence supporters who hated the idea of long-term informal use of Sterling. They voted to kill Sterlingisation and there is no place left for ‘six tests’.

And they did it substantially; there is a large payroll vote at an SNP conference so to overturn the leadership you need a strong majority among the grassroots. That strong majority raised its voice.

Sterlingisation is dead and it deserves to be. None of its advocates have even tried to make a defence of the economics of Sterlingisation. These tests are so essential to Scotland’s future that Nicola Sturgeon can’t remember what they are. Dragging this poor corpse round the room is unseemly.

So if the leadership cannot demonstrate the good grace to accept that Sterlingisation is dead then some senior, loyal old-heads in the party must take them aside and remind them that even in Sturgeon’s hyper-centralised era, party democracy still matters.

With Sterlingisation dead, what lies ahead?

There are two main fall-outs. The less important one is about the SNP’s positioning. The Growth Commission was basically a right-wing monetary system disguised behind a really boring economic development agenda. With the right-wing monetary system dead, the SNP is left with a really boring economic development agenda.

READ MORE: #SNP19 Currency advocates hit out at claim their amendment is compatible with ‘six tests’

The payroll (not a single grassroots speaker spoke in favour of the Growth Commission) keep telling us there are great things in it. They are very vague on what the great things are.

I spoke at fringe meetings on grouse moor and land reform and local democracy. The meetings were packed and fizzed with radicalism. Along with Green New Deal these are the kinds of things that light up an SNP conference.

But you’ll look long and hard before you find anything that approximates a mention of land reform, local democracy or Green New Deal in the Growth Commission – the National Investment Bank barely gets a mention. That’s what the SNP is stuck with and I find it a very long way from inspiring.

Then again, this is just what the SNP says it is going to do after independence and hopefully I’ll be able to vote for something much better than this. It is for the SNP if it wishes its economic policy to be retro-Blairism from the 1990s.

The much more important fall-out is that we all now need to take a Scottish currency seriously – and that hasn’t been happening. No-one involved with the Growth Commission or the SNP leadership has talked to anyone who has any real expertise in starting a currency.

That’s a problem because we need both a credible plan and to be able to defend the position. Let me take that latter point first.

The Daily Mail are attacking the proposals – imagine that! They attacked Sterling Union and they would have eviscerated Sterlingisation (remember, a monetary system no major advanced economy has ever used).

God knows no-one is able or willing to defend Sterlingisation – we’ve spent a year trying to get answers out if its proponents to no effect. It was never a serious policy but purely a PR fudge.

The Growth Commission believed that, with a little fancy wording and a hack-job monetary stitch-up, we could simply side-step scrutiny altogether (‘press pause’ as Andrew Wilson described it to me). That was always naive – we’re going to have to defend SOMETHING.

And to defend it we need some proper policy development – because at the moment what we have is nothing more than yet more vague targets. It’s not enough to say ‘we will have a currency at whatever point a central bank appears’ or ‘we’ll launch it once there are foreign currency reserves’, as if these things just fall out the sky.

Until you engage with the need to address questions about mortgages and pensions and savings we will remain vulnerable. People were sold the idea that we could come up with a magical pitch which involved us answering no questions whatsoever. That was always rubbish.

Common Weal has been saying for a number of years now that independence is a SERIOUS project which requires SERIOUS work. It’s not a matter of public relations or a game of semantics. At some point we will have to deal with the work of building a new nation state. Pretending that isn’t true is not honest and we will be found out.

Thankfully Common Weal has engaged with all these questions in depth (and worked with many experts including someone who HAS been involved in starting currencies). We can explain exactly how mortgages should be dealt with, how bank accounts should be shifted, how vending machines need to be adapted.

That’s because we’ve put in an incredible amount of hard work. I cannot praise enough the work of Craig Dalzell, Tiffany Kane and Jonathan Shafi (and our filmmaker Cristina Ertze). For most of the last year we have fought this fight almost alone against a much better resourced opponent.

I’m very proud of the team. But it is time for us to move on to other subjects. This whole issue has been an entirely unnecessary distraction which I believe has wasted much of the last year.

READ MORE: Analysis: A stunning victory for the grassroots of the SNP and Scottish currency advocates

We’ve covered all the fiscal policy issues and the monetary policy issues. We’ve published an exciting and detailed economic vision for how Scotland could be transformed under this system and you can find a range of short films on that report here.

And we’ve assembled the whole lot into a detailed plan for starting an independent Scottish nation – you can buy the book here or watch a seven-minute film summarising the whole lot here.

We’ve worked hard and done what we can do. It is for the SNP leadership to look at this work or come up with its own credible alternative work (though would replicating this not be awfully petty?).

So we will return our focus to constructive solutions to the Scotland we live in now: housing, energy, heating, democracy, banking, Green New Deal and much more are all the subjects of reports we will publish in what remains of 2019.

I can only say that I’m very proud of the grassroots of the SNP and everyone who has fought alongside us throughout this campaign. Sterlingisation is dead; we must embrace the case for a Scottish currency with enthusiasm and energy.