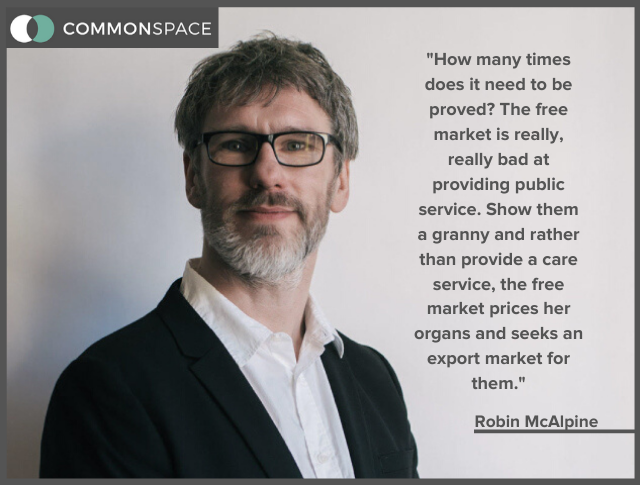 WHAT is it about the UK’s chattering class that causes them to get so confused about the pretty straightforward United Nations Resolution 1803? Some of it is ignorance, but it’s also virulent free-market ideology.

UN Resolution 1803 is straightforward and clear as a bell. Previously there had been two schools of thought on nationalisation; the US believed that when a government nationalised something it had to pay full market value to the current owners, while countries in the developing world (and the then-Soviet Union) believed these assets had been misappropriated in the first place, so no compensation was due.

This was debated and international law was set – adopting neither position. A government does not have to pay market value but does need to pay something. ‘Fair compensation’ is the term.

That is enshrined in international law and isn’t really up for debate. It is absolutely clear that, subject to some basic legal constraints, a nation-state can nationalise anything it likes. It just has to pay ‘fair compensation’.

This is high on my mind just now for two reasons. First, we’ve just been through this because the Common Home Plan involves a number of nationalisations (or in the case of land, forced break-ups and sell-ons of holdings). As always, we take things seriously and so proposed what fair compensation would mean in each case.

The second is the startled confusion all round at Jeremy Corbyn’s proposal to nationalise broadband. Among the spluttering and the ‘can he really do that?’ nonsense from down south (and, I’m afraid, also from the SNP), much has been done to spread confusion.

It’s not confusing. To help those who may be struggling, yes, he really can do that. If the company is carrying debts and making a profit, so can government (not to completely downplay pension complexities). And yes, it is hard to see how Corbyn could do a worse job.

Just as a reminder, the UK (the poster-child of European neoliberalism) talks about fibre broadband like it is science fiction. ‘Why can’t I have it?’ asks the public. ‘Don’t be so daft – it’s really, really complicated’ say London City think tanks and newspapers right up to and including the supposedly progressive Guardian.

But as you must now surely know, countries with less wealth than the UK have achieved 70 per cent coverage (compared to our pitiful seven per cent) and it may not surprise you to know that that seven per cent coverage is mostly in areas where Guardian journalists and people who work at London think tanks live. It’s not science fiction for them, just for you.

So let’s answer the public’s question. Why can’t you have fibre broadband? Because the free market has failed abysmally just exactly like it obviously would. It’s not like countries with 70 per cent cover have spent a lot more than us, its that it was done as a public service, not a get-rich-quick scheme.

To understand why, have a look at the Scottish Rural Parliament’s report on rural broadband. It is very polite, but it’s quite clear that frankly enough has been spent on broadband that it should have been done by now.

They propose it should be ‘coordinated’. That’s just a nice way of saying that letting BT put cables where it suited them for profit maximisation rather than where communities actually needed them isn’t a good way to get broadband to people.

I mean, ‘give corporation big monopoly contract and then let them dictate the terms’ wasn’t a recipe for doing it right, was it?

How many times does it need to be proved? The free market is really, really bad at providing public service. Show them a granny and rather than provide a care service, the free market prices her organs and seeks an export market for them. They don’t sell their grannies, they restructure them and extract ‘maximum value’ from their asset.

It’s everywhere – PFI and the ‘buy three get one’ procurement model which builds hospitals that kill but are never anything less than extremely profitable, G4S and the ‘what, we charged you for managing prisoners that didn’t exist?’, Serco and its ‘fuck your own customers’ business model.

As I regularly argue, Scotland’s economics are hardly cutting edge. There is negligible innovative thinking and what exists is seldom more than repeated dogma or yet one more run round the standard ‘input/output’ model.

If there was we’d be exploring key concepts like Foundational Economics, the persuasive belief that there is a foundation of a society that is too important not to be run for public benefit. We accept it with school, the police, roads, the health service – why not energy, communications and public transport?

None of this is backwards-looking – far from a nationalised industry being less flexible than a privatised one, in the modern age it should be more so. Next year, Common Weal is planning a report on what a modern, democratic and responsive mutual public utility could look like, governed by its members rather than run as a branch of politics.

The private sector claims that it is ‘permanent competition’ that gives people what they ‘really’ want. – and yet somehow it always turns into a cartel. If your only solution for better public infrastructure is the ‘supplier switching’ myth, can you explain why it is suddenly going to work after 30 years of not working? There are much better ways to meet the needs of citizens.

This attractive vision is fiercely resisted by the corporations for obvious reasons (who are they going to screw over if they’re not screwing you over?), so they say ‘too expensive’. But government has more financial power than BT – if if it can be run privately at a profit, it can be run publicly at a profit.

They’re very keen that you do not understand the meaning of UN Resolution 1803; they have done well out of persuading you that public ownership is impossible.

It’s not – you just have to forget the market value of the business and focus on ‘fair compensation’ for the assets. As an example, to take the existing energy system into public ownership the Common Home Plan proposes that the owner should be repaid all capital expenditure costs plus a a generous 30 per cent surplus which is a good return on their investment.

But then since some of them have been harvesting a monopoly market for years, and since the assets have depreciated, that would be taken into account. The right wing will be sending you off to look at stock market values to confuse you. Don’t pay attention.

I’m a fan of private enterprise (if we call it that). Common Weal works with lots of suppliers and businesses on both a commercial basis (we do a fair bit of merchandise) and on a policy basis (we want to see ethical, quality domestic businesses build up). People have great ideas and they should be turned into great products. The state doesn’t do that well.

But in the energy system, in the national communication system, in the transport system, we have crucial infrastructure in the hands of businesses that haven’t brought a good idea to the table in a long time. You just can’t call BT broadband outfit innovative. As I argued above, it is not difficult to prove that the public sector does it better.

Big economic change is coming, no matter what. Free market economics is in absolute turmoil and even many of its high priests now accept the need for serious reform. Public trust in privatised monopolies is low and dropping. The bailouts of privatised hospitals and trains and ‘service companies’ (Carillion) isn’t going to slow down.

In my vision of Scotland we don’t wait for things to fail at doing an already bad job, we have national ambition and vision and we develop a laser focus on delivering world-beating infrastructure. BT isn’t how we do that; UN Resolution 1803 is.