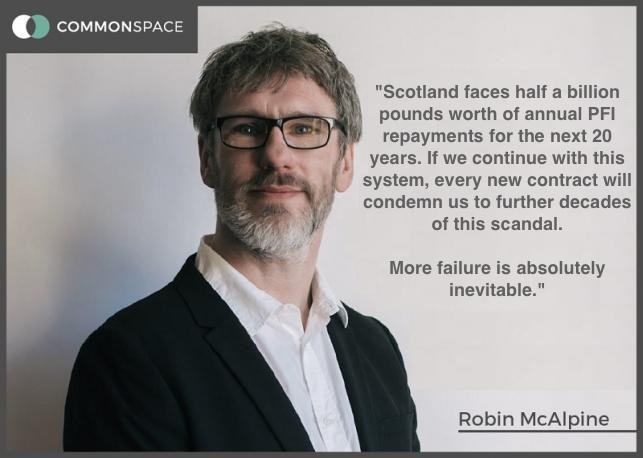 TODAY’S Scotsman has an article from Bill Jamieson making the argument that the Carillion collapse is regrettable but that the only solution is to let ‘capitalism’ fix the problem.

This gave me a very strong flashback to the kind of golden era family entertainment films where some avuncular old crackpot professor would flip the switch on his new machine which would start gurgling and groaning and then collapse in flames.

And the professor would say “don’t worry kids, it’s meant to do that”.

So are we going to fix this? Or is there another plan for when projects don’t get built, the public has to pay the price in delays and more tax, and workers innocent of all of this lose their job?

So are we going to fix this? Or is there another plan for when projects don’t get built, the public has to pay the price in delays and more tax, and workers innocent of all of this lose their job?

Do we just assure the children that “it’s supposed to do that”?

By far the most important point to get across is that, while it is genuinely fair for the administrations led by Jack McConnell and Alex Salmond to claim that there were limits to what they could do, many of these have now gone.

A number of changes in recent years (not least the decision by the Office for National Statistics to require new public-private partnership projects to be brought ‘on book’) means there is a straightforward solution available to the Scottish Parliament.

And the fact that public attitudes on this issue have almost certainly hardened means there is likely to be very little public resistance. So this is a straightforward case of the Scottish Government’s nerve versus the determination of corporate lobbying.

A number of changes in recent years means there is a straightforward solution available to the Scottish Parliament.

Understanding how to fix the system only requires us to understand what Carillion was. It got big contracts from the government to build public infrastructure or run public service. It then went on to build nothing and run nothing.

Instead, its role was to form partnerships with the banks to put together financing deals and then subcontract the actual work to other companies.

To understand why it all went wrong you need to look at the business model this implies. For any given public contract, Carillion is successful if the financing deal maximises how much of the public money can be taken in charges and the subcontracting process minimises how much is actually spent on building things.

And that was the company’s sole purpose – it was created and devised to take as much public money as possible but to spend as little of it as possible on what it took the money to do.

One of the points Bill Jamieson makes in his article is that the financing and subcontracting role must not be brought under public control because the public sector has become bad at procurement.

The fact that public attitudes on this issue have almost certainly hardened means there is likely to be very little public resistance.

Now, as a consistent critic of public sector procurement, I don’t disagree. But why is the public sector so bad at procurement? Because it outsourced so much of it. An athlete who ‘outsourced’ all their training to someone else would become slow and uncompetitive, too.

The public sector has to become a lot better at procurement (and financing and project management) and to do that it needs to take back control and recruit people who’re really able to do this on the public’s behalf.

Common Weal published a proposal for this early last year. We called for the creation of a ‘Scottish National Infrastructure Company’. Whenever anyone in the public sector in Scotland had a big infrastructure project (from building a school to repairing a road), the infrastructure company would design, finance and project manage.

It would recruit finance experts, project managers, specialist procurement and contract management professionals, architects, engineers, planners and policy experts. They would take the specification for the infrastructure and make it happen.

This is a straightforward case of the Scottish Government’s nerve versus the determination of corporate lobbying.

It would be a first rate contract manager, monitoring progress to make sure things are being done properly. It would be a centre of excellence on ‘user-driven design’ – where the floor plan of a PFI hospital was defined by ‘how little we can get away with’, it now it would be designed in conjunction with patients and staff to make it the best place for people to get better.

It would stop dropping new infrastructure into the place where it can make the biggest profit on land deals (all those schools and hospitals stuck outside walking distance of the community they serve) and would design them into the heart of communities.

It would pursue constant technological innovation and improvement. And as it subcontracted the actual build work into the private sector, it would use its procurement power as an economic tool, supporting and building up domestic Scottish businesses, especially growing medium-sized enterprises.

It would be the public’s champion in building the kind of infrastructure that the public wants and needs, not the leech sucking out as much as it can.

Because it would be part of a three-way ‘public-public partnership’ it would be much cheaper for taxpayers. It would receive commissions from the public sector, with much being done via local authorities which do not face the severe borrowing restrictions Holyrood does.

Common Weal published a proposal for this early last year. We called for the creation of a ‘Scottish National Infrastructure Company’.

Then it would finance projects in partnership with the soon-to-be Scottish National Investment Bank. That three-way partnership would devise every part of the deal to be in the maximum public interest. It would be secure, coordinated and efficient.

The foundations of an infrastructure company are there already in the Scottish Futures Trust. It is certainly not beyond criticism (particularly because it is currently so deeply tied into a system which is effectively controlled by the Carillions of this world).

But some conversations I’ve been party to make clear that many people involved would love to create this kind of effective agency. There would be little internal resistance.

So what now? This week Common Weal sent a briefing to all MSPs explaining this proposal. There is a solid, coherent suggestion on the table. Will it be taken seriously?

On the one hand, I have some doubts. Scotland does not have an administration which is known for being particularly willing to stand up to the finance or construction industries. It at times also seems to be guided by a principle of ‘slightly better than England is plenty’.

Whenever anyone in the public sector in Scotland had a big infrastructure project (from building a school to repairing a road), the infrastructure company would design, finance and project manage.

Scotland already has a slightly better system. It’s called non-profit distributing, which is a misleading name because it still distributes a lot of profit. But it caps that profit more than the PFI model.

If this government reverts to its default approach I’d expect it to toughen up the NPD rules a bit more so it has been seen to ‘do something’ but then to spend a lot of time getting other corporations to pick up Carillion’s slack, presenting this as ‘purposeful good government’.

In other words, it would lob on some sticking plasters at the back and give it a quick lick of paint round the front. But the system would remain intact, and because the Carillion-style risk is baked deep into the business model, the next failure would be along soon enough.

But I do have some hope. The only thing that has made this Scottish Government do anything more substantial is when it feels under a lot of pressure or if it is getting a lot of criticism.

Otherwise it frolics around merrily in Brexit Meadows, Nicola Sturgeon’s happy place, the one place where the media and opposition don’t attack her.

So what now? This week Common Weal sent a briefing to all MSPs explaining this proposal. There is a solid, coherent suggestion on the table. Will it be taken seriously?

But this isn’t working for the SNP. It’s polling continues a slow but inexorable decline and its leader’s popularity continues to fall (though the alarmingly sharp fall we saw last year has at least levelled off).

Meanwhile, despite the indy movement’s eternal optimism, support for independence has been bouncing around the same 43-48 per cent kind of level for three years with no sign of consistent improvement. And the latest voting projections leaves the independence movement five or six seats short of a parliamentary majority after the next election.

The Scottish Government needs something, some sense of purpose, some clarity of vision, some big (popular) things to do. It adopted the National Investment Bank proposal in exactly these circumstances last summer – so perhaps it might adopt a National Infrastructure Company proposal now.

Every single aspect of this PFI scandal was accurately predicted 20 years ago. Yet, even as every prediction has come true, fundamentally nothing has changed.

The Scottish Parliament faces half a billion pounds worth of annual PFI repayments for the next 20 years. If we continue with this system, every new contract will condemn us to further decades of this scandal. More failure is absolutely inevitable.

Fix it or make the public pay the price; this is now in the hands of the Scottish Parliament.