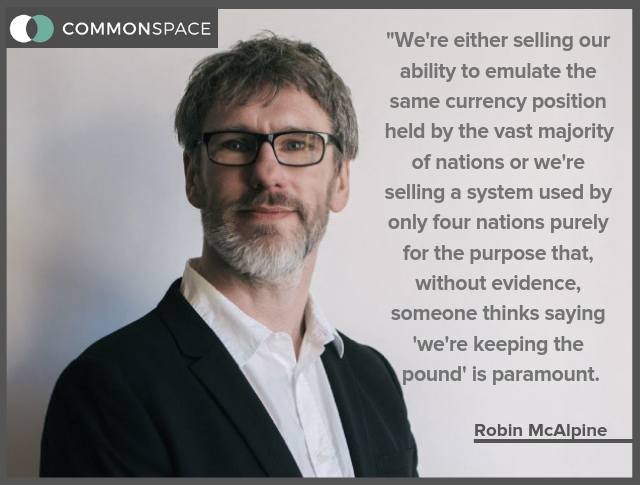 WE NEED to talk about No voters. Actually, we need to listen to No voters and then talk about what they say. Because at the moment there are too many people making stereotypical assumptions that are inaccurate.

For example, the latest defence of the Growth Commission basically goes ‘we know you hate these proposals but No voters like them so you need to hold your nose’. Indeed, I’m fully expecting leadership-funded opinion polls to emerge apparently ‘proving’ this in the run-up to the vote.

But this is not correct on multiple levels. To begin with, the Growth Commission report was published with a sum total of zero public attitude research having been carried out – we asked at the time and that is what we were told.

Indeed, I’m rather shocked by the almost total lack of serious public attitude research work which has been done on independence by the SNP since we lost the referendum in 2014 – anecdote is a terrible basis for setting strategy.

Thankfully, the Scottish Independence Convention really has done quite a bit of research on this – two rounds of focus groups and a large opinion poll. The findings are important.

The first thing to be clear on is that ‘floating No voters’ are not an imaginary group; they’re real people and you can talk to them in a proper, controlled environment and hear what they say. And when you do you’ll quickly realise there is a big difference between unionists (who fundamentally believe in the Union) and people who simply voted No.

Very roughly, at least about 20 per cent of the population fall into this category – not fundamental opponents, just not (yet) convinced. And if you profile them they look very much like Yes voters. They’re not markedly wealthier, younger or older, male or female. They spread across the spectrum of ‘average Scots’.

I’ve read the full transcripts of 12 hours of group discussion on why they didn’t vote Yes, professionally moderated by a Scottish university. There’s a lot to unpack, but if you wanted a very short summary its that we didn’t persuade them of the risk/reward balance.

It’s important to understand this clearly. Voters who are not ideologically directed towards either nationalism or unionism need to feel that if they are to take a risk, the risk must be manageable and the reward really worth it.

At first the official Yes campaign tried to square this off by focusing on reducing the appearance of risk – the ‘nothing will change’ stance. Unfortunately this just didn’t work. First, voters didn’t believe there was no risk. And worse, they couldn’t hear clearly what was the reward for the risk they were being asked to take (a promise they’d be £1,300 better off was unconvincing).

The second phase of the independence campaign was substantially more successful. That was the optimism phase, the period where the risk/reward dilemma was addressed by offering a much better reward.

This is unsurprising; all humans are fundamentally risk-averse. Reduced risk is still risk and unless they get something out of it, why bother? It’s the ‘if nothing much will change, why not just vote No?’ argument. If they’re to accept risk, they need to believe in a sufficient reward.

The research evidence is that this worked. Participants were asked specifically whether the independence movement had been ‘overly optimistic’ – if we’d been a little more subdued, a little more pessimistic, would it have worked better?

The response was really interesting, surprising even me. People consistently said ‘no, we liked the optimism, we wanted to believe it could be true…’. The problem wasn’t that we over-promised on the reward side, there was a bigger problem with the risk side.

This takes us to a second argument – that in the 2014 campaign the currency issues wasn’t as big a deal as people think. This is simultaneously true and not true. While participants in the research project weren’t pinned down on this, they really weren’t saying that they had a preferred currency option.

(Indeed, my reading of the groups were that they really didn’t quite know what the pros and cons were at all – they simply didn’t know ‘the right choice’.)

So I agree, ‘what currency?’ wasn’t a deciding factor. What really was crucial though is that we sold ourselves on a single solution (currency union) and it looked like (a) we couldn’t deliver it and (b) we didn’t know what else to do.

It is this which was absolutely crucial – currency was a proxy not for the generic risk in independence but the specific risk that we didn’t know what we were doing. It is this that counterbalanced the reward aspect for many. They wanted the optimism, but they needed confidence we could deliver.

There’s much more to say about this, very much including the factor that any degree of uncertainty (‘we might’ or ‘we’d like to’ is just so much weaker than ‘we will’) is a giant off-putter and particularly in relation to risk.

Which brings us to the Growth Commission. It has uncertainty built in – from year to year it will never be clear what currency we’ll be using and for how long. It is what it sounds like; a fudge, uncertainty in a box.

It’s also entirely untried. I keep repeating that no advanced, exporting economy in modern history has used a ‘dollarisation’ currency position (and for very good reason). We’d be the first, a flat-out experiment. That ladles on more risk. The fact that we really would be enormously vulnerable to any external economic shock while Sterlingised ladles on more risk again.

READ MORE: Robin Mcalpine: 15 ways the Softies have got this wrong

(This last point is really important – starting a currency is a risk, as is sticking in a Sterling zone awaiting its next financial crisis or a Brexit meltdown. But whenever I contemplate Scotland facing a major economic or financial crisis without any monetary powers and barely any fiscal power, I feel a chill rush up my spine. It goes a long way beyond ‘a bit of risk’.)

Narratively, the Growth Commission is risk on a plate. It seeks to SOUND unrisky by SOUNDING like the status quo, but faking the status quo ironically requires a system which opponents will be able to make sound like the riskiest thing you’ve ever been asked to do.

And worse, it simultaneously depresses the reward element. It condemns Scotland to a fiscal and economic model barely a whisker different from the UK. There is no ‘utopian story’ to be told to motivate people to take the risk.

By pandering to an imaginary group and offering them ‘banker reassurance’ about risk (i.e. the status quo is your friend) in return for a ‘bankers promise’ of reward (in 25 years we’ll macroeconomically meet average performance) you end up with a lose-lose formula – all risk, no reward.

So my contention is straightforward – even without considering the impact on existing Yes voters, as a pitch the Growth Commission will fail because it misunderstands real No voters and mistakes them for a different group (kind of archetypal ‘grumpy unionists’ whose vote we’ll never win). It gives them a strong reason to say no again.

This has hardly scraped the surface of this issue. If there was space I’d spell out what it will sound like when we start having to defend this position against opposition attacks. It will unravel rapidly. Sure, they’ll attack us over a new currency, but that is in our hands.

If this has to be put at its simplest, we’re either selling our ability to emulate the same currency position held by the vast majority of nations or we’re selling a system used by only four nations (Ecuador, Lichtenstein, Montenegro and Panama) purely for the purpose that, without evidence, someone thinks saying ‘we’re keeping the pound’ is paramount.

If you think that too, think about this – on TV, over and over and over again, those four words ‘Ecuador, Lichtenstein, Montenegro and Panama’. Designed by bankers for bankers, the Growth Commission will lose us independence.