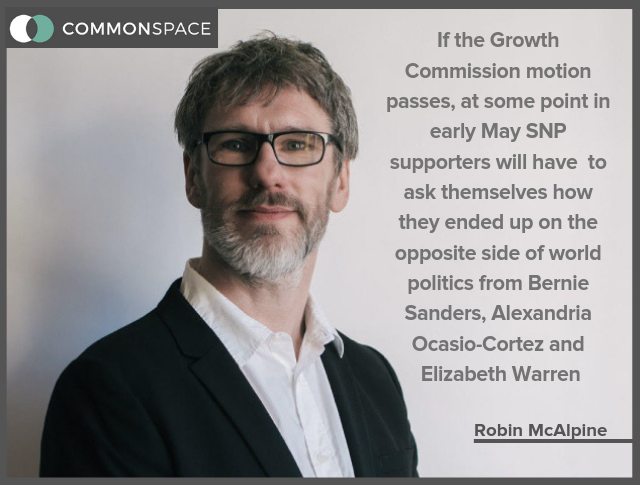 THERE are now two planets SNP members can live on. On one of those planets we are facing massive social and environmental catastrophes which can only be avoided through major, coordinated public action. On the other, the priority is providing comfort for international bankers.

At the SNP’s Spring Conference the only planet on the agenda is the planet of comfortable bankers. The planet where we work together to transform ourselves will become alien.

Let me assume that you believe the International Panel on Climate Change and that there is a very high probability that in 15 years time or so we will have passed a tipping point and preventing the collapse of the planet’s ecosystem will no longer be possible.

The question then is what do you do? Roll up your sleeves or put your fingers in your ears?

Thank god for a new breed of US politician like Alexandria Occassion-Cortez who are fiercely independent and strategically focussed, ready to take on her own party when her own party is the barrier. (Oh for such a politician in Scotland).

They have said the words that the previous generation of politicians were afraid to say – only massive, coordinated, collective public action has any chance whatsoever of addressing climate change. We must raise taxes on big business and the very wealthy (who are disproportionately responsible for this crisis anyway) and we need to invest it to change how we live.

We need energy that doesn’t poison us. We need houses built to keep us warm (rather than to enrich developers). We need transport that is clean and efficient. We need a food system which is healthy and local. We need an economy that creates equality (and in doing so we’ll substantially tackle the mental health problem). We need to reduce consumption and sharply reduce waste.

We need to transform how we live, before its too late – and yet none of this is doom and gloom. Because if we make the transition necessary to achieve this we do great things.

We make houses warm and great to live in. We build a consistent, reliable energy system. We travel faster and in more comfort. We eat better and feel healthier. We live among less litter and waste and ugliness. We reduce the terrible social pressures to consume that lead to poor mental wellbeing.

But above all we invest and create an embarrassment of riches of high-quality new jobs, a new generation of manufacturing, an incredible economic stimulus which would enrich us all, truly 21st century infrastructure. A Green New Deal offers not only survival but real, pure, distilled hope.

There is not a single coherent plan for how to do this via the free market. The best free market advocates have come up with are various forms of regulation and incentive to be less bad, reduce the damage somewhat. They still condemn you to extinction but at a slightly slower rate.

And that is the reality of the Growth Commission. It’s in the name – it’s from a planet where we can just keep doing more and more of what we’re already doing because profit comes first and somehow it will be OK if we place our full trust in the bankers.

There is no way any government stuck in an informal Sterlingised monetary system could begin to contemplate transformational collective investment of a fraction of the scale necessary. It’s not even a feasible argument.

If you boil away the endless rhetoric in the Growth Commission it acknowledges this in no uncertain terms. It makes ‘providing comfort to international lenders’ a primary goal of the nation’s fiscal policy.

In case that’s not clear, let me unpack exactly what that means. Scotland would have no currency and no central bank (what is referred to in the report as a ‘Central Bank’ is nothing of the sort and wouldn’t be recognised as such internationally). It could not create so much as a ten pence piece – so it has to borrow all its money from somewhere.

Scotland would have to ‘buy’ its money from the London’s private finance markets. But the London finance markets will set borrowing rates according to what they see as the ‘risk’. And we know from past practice that finance markets see public investment as a risk. They always expect constant downwards pressure on public spending.

That’s because finance markets are exactly who has been making profit from privatisation, deregulation and outsourcing – and from tax avoidance. They simply wouldn’t allow Scotland to invest on anything like the necessary scale.

And before I hear any spluttering about this, and in case you are in any doubt, the report reinforces the point by compelling Scotland to cut sharply its fiscal deficit. It’s there in black and white, and its the absolute opposite of the Green New Deal.

So it will be back to ‘Non-Plan A’ – offer the same financiers preferential access to Scotland’s renewable energy (it’s almost all privately owned) and then pretend this is a ‘green move’. It’s not, it’s the opposite. It’s failing to take coordinated control of our energy system.

My heart really goes out to SNP members. I spend a lot of time with SNP branches all over the country and they really think that the party is committed to serious, bold action to prevent climate change. They don’t like the Growth Commission but I’ve met some who have reluctantly tried to tell themselves that, if it passes, political priorities can change in the future.

It’s why its so important to be clear that passing this motion is not only a failure to achieve what these members believe in, it’s doing completely the opposite. It’s a flat-out rejection of the very idea of a Green New Deal.

And so, bit by bit, drip by drip, the hope and optimism and determination to talk about a better future which so brought the independence referendum alive is drained from the SNP. All that is left is the claim that, if we’re willing to reign in our aspirations for 25 years we too could be like Belgium.

It really is time for members of the SNP to look deep into their hearts. What got you into party politics? What is your hope for the future? What inspires you?

Well all of these are the absolute opposite of giving comfort to international lenders. You are locking your party into an economic framework which makes it impossible for the things that you believe in to happen. You can certainly vote in favour of the Growth Commission motion, but you couldn’t credibly pretend that you believe in a transformational vision for Scotland.

There is only so long that the party machine will be able to disguise this relentless rightwards drift with progressive rhetoric, especially as it is increasingly at odds with the direction of travel of real progressive politics internationally.

A generation of young people will start to see the SNP as the failed past. An existing generation of people who were inspired to join the party because of the optimism of the indyref will be left with little to cling on to.

Even the efforts of the London commentator class have been unable to sustain any interest in ‘The Independent Group’. I can’t imagine that, if it becomes a political party, it will make the slightest dent in Scottish politics. So why on god’s green (currently) earth does the SNP seem to want to remodel itself in their image?

If this motion passes, at some point in early May SNP supporters will have to ask themselves how they ended up on the opposite side of world politics from Bernie Sanders, Alexandria Ocasio-Cortez and Elizabeth Warren.