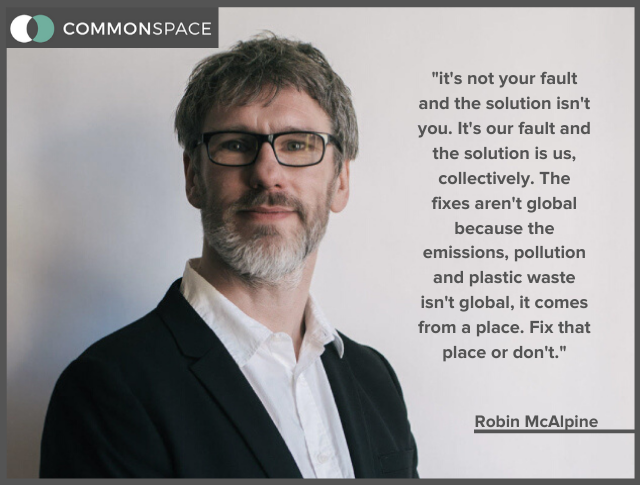 I am writing here about the sight of my children in tears as they watched the slaughter-by-fire of the koalas. They couldn’t bear it. What I couldn’t bear was the knowledge that this was just the start of a life of tears over a collapsing earth.

Cristina and I have already shed our tears over basically everything David Attenbourgh has shown us on the TV, perhaps nothing more than the sight of a mother dolphin dragging around her dead baby (probably killed by ingesting plastic). Her grief quickly became our grief.

We see the Amazon rain forest on fire to clear space for your soya needs. We see grass growing near Mount Everest and polar bears starve on the shrinking ice flows. The bees in my garden are fewer each year. Desperate wild animals are venturing into cities to try and scavenge enough food to keep their children alive.

None of this is going away; all of it will accelerate. The lives of my children will be a long, painful spectator sport as entire species suffer and die, plants wither and die, entire parts of the world dry up and die.

Before they are drawing their pensions I strongly suspect they will be living in a world where there isn’t enough food left for the humans still alive. As mineral resources decline, I expect we’ll see more conflict, more mass movement of people driven from their homes by the violence of the weather or the violence of their fellow humans.

Scott Morrison is a moron, a fool, as dangerous a man as is alive. He is holding to the line that him throwing litter out the window isn’t causing litter because there’s more litter than he threw out the window, so it couldn’t be his fault. The concept of ‘cumulative’ is beyond him.

Or is he the last honest man? The Scottish Parliament has set climate change targets I don’t believe it is technically possible to achieve, even if they had started a programme of action likely to deliver them (which they have not).

Even the best seem to me to be failing in leadership. Corbyn’s Labour and the English Greens were in a kind of bidding war to claim who would insulate the most houses in a decade. But as someone who has actually modelled the labour requirements and the supply chain implications, neither of them was being in any way realistic at all. It was just talk.

Or you may place your hope in the campaigners, in the youngsters or the NGOs. But the youngsters are telling us that they are desperately looking for a plan and they know that keeping doing what they’re doing won’t result in a plan. They are realistic.

The NGOs tell me they have to ‘work within the system’. The system is what the Scottish Government is currently doing. I ask how long they would need to keep doing that to be successful. They know the answer is ‘infinity’. If we keep doing what we’re doing for infinity time we won’t succeed.

In case you think otherwise, what we’re currently doing will actually have to all be ripped out again when the time comes to do what we actually need to do. Hurray us.

In fact, we’ve done it. We’ve counted it. Common Weal has produced what remains the only comprehensive, costed Green New Deal anywhere in the world. We can clean up our act as soon as we’re ready to start.

But that won’t happen so long as our leaders (local, national, global) continue to confuse koala tears and crocodile tears. Don’t kid yourself on, Scott Morrison may be a dangerous moron but we’re not doing any more than he is.

Set some targets (doesn’t matter what they are – that’s just window dressing). Talk about perhaps some ways to encourage the free market to reform. A few disparate and limited grants given to private companies who do often shoddy work. Privatise your renewable energy resources and then lecture people about how it’s secretly their fault and they need to up their game.

The free market is the problem, not the solution. If we privatise the profit-making bits and socialise the expensive cost-intensive bits, the public gets screwed over twice and inequality rises again and again.

Spraying insufficient grant funds across the headlines makes you look good but it’s a lie. It hasn’t worked, it isn’t working, it won’t work.

I’ve heard some who care enough (or say they do). I can even think of a couple who have at least a sketchy idea of what needs to be done. I don’t know a single one that knows how.

So it’s all a fraud, a fake, a cover. There is only one target Scotland should even consider – how fast can we get to zero? That’s it. Everything else is just to make us look good.

My children, your children, face a future in which they come to see the death of the planet around them as normal. I fear the tears will dry up eventually (though the world most certainly has a renewable supply of crocodile tears). If that happens, we’re finished.

So may your tears burn your face until you say finally, for good; it must not be like this. It must be different. It must be now.

When enough people in Scotland say that we can begin. The very next day we can begin. Then, change will be swift. Until then, the tears in our eyes must not blind us to the blood on our hands.