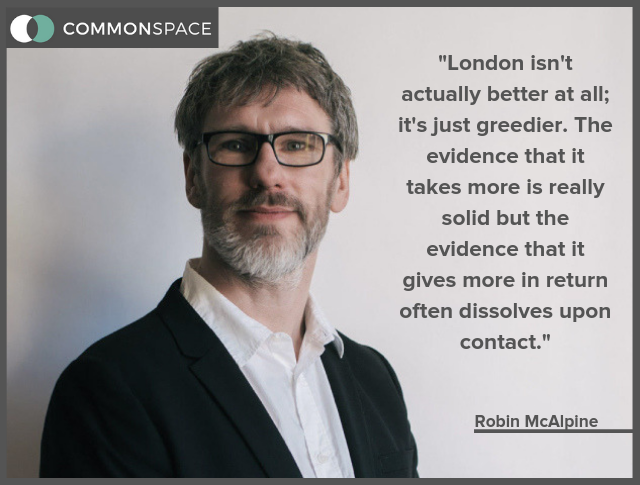 While mocking Boris Johnstone is hardly tricky, on that occasion he was merely reflecting the dominant theoretical economic model which underpins the UK. In Brit-O-Nomics, bigger is always better.

But a new academic report examines the assumption of ‘agglomeration’ (assuming bigger is more efficient) and pretty well entirely demolishes it. London’s productivity miracle is an illusion.

This gives us lessons on how to fight back against the lazy economics that underpins unionism, but it also tells us much about how we ought to be running Scotland – and about the nature of economic debate in this country.

The report is from Sheffield University (and naturally not a Scottish university – more on this below). It takes a forensic look at the evidence for an ‘agglomeration effect’ in London which would mean that a job there really did have a bigger economic impact than one up here.

The economic concept of agglomeration is a simple one; it is the theory that if you bring lots of economic activity into one place it generates a ‘bigger than the sum of its parts’ outcome, improving the productivity of individual jobs through the efficiency of scale.

And at face value it might look like that is true. Looking at all the UK’s regions and ‘sub regions’ the report lists their ‘Gross Value Added’ (GVA) per capita from London at the top (with 179 per cent of the UK average) to ‘South Scotland’ at the bottom (only 61 per cent of the national average).

At a quick glance it looks like a London job adds almost exactly three times as much value to the UK economy as a whole as a South Scotland job. And let’s be honest, a quick glance is often taken as plenty to dismiss the economics of independence in the media.

But there is a problem, which is that the ‘agglomeration effect’ is measured without any reference to the many other factors which influence GVA. The Sheffield University report strips those factors out one by one to assess what like-for-like productivity would be.

First you adjust the figures for working-age population (London has a smaller over-65 population than elsewhere). This brings London GVA per capita down to 165 per cent of the national average.

Then of course the top jobs tend to look more productive because of how GVA is measured so when you adjust for the profile of seniority of employment the London lead drops to 119 per cent (and the authors believe this is a major understatement because there is insufficient data on job types).

Finally, people in London tend to work longer hours – so you adjust hour-for-hour. By this point London is only at 111 per cent of average UK productivity. That is despite massive concentration of public investment in the capital and the fact that this is almost certainly an overstatement.

If you then do the same thing for Southern Scotland, the figures jump from 61 per cent to 77 per cent then 86 per cent. Suddenly that amazing performance of London doesn’t look quite so amazing any more.

(The full report isn’t a particularly tricky read and can be found here and for a shorter version Larry Elliot does a good summary in the Guardian here.)

So what lessons do we take from this? I think there are three. The first is that I find it hard to understand why this kind of economic research doesn’t become a part of the ‘official’ narrative around independence. There is a substantial and growing literature not produced in or by Scotland but which challenges the ‘centralisation economics’ of unionism.

It is therefore frustrating that there are only a few of us in the independence movement who write seriously about these current economic debates about centralisation and concentration. There just isn’t a think tank, research unit or government department which is collecting and organising the economic case for independence (the Growth Commission is largely signed up to Brit-O-Nomics).

Common Weal does a lot of this work but we can’t do everything. We’re deep in development on Green New Deal and there are those who are better resourced than us to monitor and promote helpful contemporary economics. Why is this not being done?

Then again, this reflects the reality that there is very little serious economic debate about Scotland. The Sheffield Political Economic Research Institute (SPERI) has done more on its own to challenge the economics of centralisation than all the economic output of every university in Scotland combined (and I include Fraser of Allander in that).

The Scottish economy is woefully under-examined and when it is there is generally little more done than the most basic of economic arithmetic. It is as if Scotland is assessed on the basis of how well it fits into the simplest available theoretical model; the model itself isn’t challenged.

The unionists have had a massive victory here; they persuaded academia and beyond that exploring contemporary Scotland is highly controversial and so best avoided.

Universities, research institutes, grant funding bodies – the whole lot seem to look at the study of Scotland and its economy and to conclude that doing nothing is just the safer option (mumbling ‘political football’ to themselves to justify their inactivity). Scotland has no real vibrant economics.

But there is a final conclusion that is every bit as important; what is true for the UK is also true for Scotland itself. Any way you look at it, on the GVA per capita measure this report starts out from, South Scotland is still lowest in the UK. Even once you factor out reasons for this, it is still the least productive part of the UK.

I’m not surprised. This time last year I spent a genuinely amazing family holiday in Galloway (during the heatwave – it was like the riviera or something). It was prompted by a number of visits on work-related business which reminded me how beautiful and rich in interest that region is.

But if the central belt of Scotland wanted to give the impression that it really, really didn’t care about Galloway, I’m not sure it could do a better job than its doing now.

Over and over when I talked to people on holiday they kept saying ‘London doesn’t ignore us any more than Edinburgh does’. I spent years (in a previous job) working pretty closely with Scottish Enterprise. Their faith in an ‘M8 corridor’ as an agglomeration model was no less ideological than advocates for London centralism.

And yet this research suggests that there is no real justification for this in Scotland any more than there is in the UK. If Scotland treats its regions with contempt or disinterest, we indy supporters can hardly be surprised if these regions then fall at the very bottom of the table measuring support for independence.

Important People (TM) tend to believe in their own importance. By extension they tend to conclude that where they are must therefore be the important place. It is simple human solipsism that cities that concentrate power reassure themselves that their dominance is justified because of their greatness.

This report and others strongly suggest this isn’t true. The independence movement needs to get much more serious about the economics of decentralisation. Economic policy in Scotland needs to drag itself out of its central belt bunker. And all of this would be a helluva lot easier if we had proper academic engagement with the big economic issues of this era in Scotland.

All of this would benefit both Scotland and the case for Scottish independence. We need to start taking it much more seriously – if we want to be taken seriously ourselves.