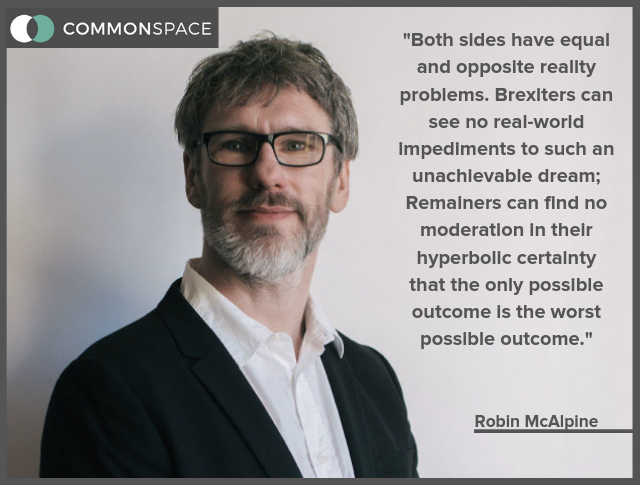 Common Weal Director Robin McAlpine looks at the state of the Brexit debate three years after the Leave vote, finding that both sides are causing long-term harm to democracy in Britain and Scotland

I WANT Brexit over. I favour a remain outcome but not quite as much as I just favour an outcome – because the polarisation of the debate has caused people on both sides to lose their minds and it is causing long-term harm to democracy in both Britain and Scotland.

Let me start by assuming that I don’t need to make the case here for how Brexiters have become disengaged with reality – and it’s to do with a lot more than £350 million written on the side of a bus.

But let me make the challenging suggestion that this has been mirrored with equal and opposite reality problems on the other side. Brexiters can see no real-world impediments to an unachievable dream; Remainers can find no moderation in their hyperbolic certainty that the only possible outcome is the worst possible outcome.

Let me take a bog-standard, everyday kind of a Remain core belief – that there will be no food in the shops after Brexit. Food is bought and sold on an international market and any barriers to its cross-border flow lies with the territory into which it flows, not the one it flows from.

If there was really some kind of administrative backlog at the border, the UK could just suspend customs checks for a period (we don’t do many just now). It could adjust its tariffs and regulations and buy from new suppliers.

READ MORE: Analysis: Boris will have three Brexit options as Prime Minister – all fraught with risk

This is far from ideal (though you can say that about much EU policy) and it is quite a different story for exporters – there is a real debate to be had and real risks to discuss. But frankly £350 million for the NHS is a more likely outcome than a global food embargo on Britain. Catastrophe-mongering devalues the real risks and normalises them if they happen.

(The issues in medicine supply are a bit different but I simply don’t believe it will be hard to import medicines and I think that targeting your fear-mongering at vulnerable people who rely on medicines in this country has been in a similar category of ‘dirty’ as propaganda posters of refugees.)

But the polarisation is more severe – if Remainers began all this with some appreciable recognition of the failures and problems of the EU, that recognition has been magicked away using the same powers that solve the Irish border problem for Brexiters (which is to say ‘the power of needing it to be true’).

I am a Remain voter but work in public policy. On serious economic matters possibly the biggest barrier to positive, progressive change is the EU. It imposes a web of rules about public procurement, state aid and competition law which vigorously defend the interests of corporations, very often at the expense of the public good.

I am pretty fed up with Remainers saying ‘these fears are unfounded – look, country X has its Y nationalised so it’s not the EU’s fault’. But again and again you’ll find that country X nationalised Y before the rules were put in place. They could do it (and remain compliant after it was done) but no-one new can.

Let’s take a concrete example. There are only two real barriers to Scotland building its National Investment Bank and one of them is EU competition and state aid laws. This is not imaginary; policy-makers are trying to work their way round that barrier right now. This is real-world fact.

READ MORE: EU Elections In Perspective: The rise of the Brexit party as a ‘creature of the void’

I then hear Remainers tell me I’m talking rubbish because Germany has a state-owned national investment bank (the KfW). Sure it does – which it set up in the 1940s. If it was set up now in the same manner it was set up then, it would without question have fallen foul of state aid and competition laws.

This is not an isolated example – almost all collectivist economic reform is severely limited by the EU’s lobbyist-written rules. But you try having an informed and productive debate with some Remainer about this very real problem…

The liberal narrative is unwavering – Brexit is all lies, Remain is the cure. The EU is the liberal west’s guardian of free movement, free trade, political freedom, collective international progress, liberal democracy and economic solidarity.

Except free movement is only for the predominantly white people inside the EU’s razor-wire border. It is one of the most protectionist economic blocks in the world, rigging markets for predominantly white producers. Whenever convenient it turns a blind eye to political oppression (Catalonia) or threat to the rule of law (Hungary or Poland).

Collective international progress includes letting refugees drown in the Aegean and making deals for the destruction of the Amazonian rainforest. And economic solidarity? I take it you have no friends or relatives in Greece?

As for ‘Remain and Reform’ – I wish it felt like it had more purchase on reality than if it too was on the side of a bus. Hand on heart, how many of the the Guardian’s never-ending stream of Remain-absolutists do you think will be campaigning with vigour for desperately-needed EU reform in three years’ time if we remain?

They were all furious that Jeremy Corbyn only scored the EU at seven out of ten – so why would they waste time reforming a nine-out-of-ten masterpiece like Brussels? And if you’re interested to find out what kind of reform, how it will be achieved or in what timescale, you’re out of luck.

While all this goes on, Europe (in its appointment of the new President of the European Commission) has reverted backwards from tiny democratic reform to ugly insider stitch-up. Is it really so unreasonable to mention this?

In case you think I’ve gone full Brexit, I’ve certainly not. Brexit is going to have a negative impact. Not as bad as the scare stories, but it will, certainly for a while. And it has opened an avenue for a nasty kind of politics in the UK.

If there was another vote tomorrow, I’d vote Remain again. But my experience of the last three years would make that vote even more reluctant – I (like you) have been the target of a campaign of fear based on something other than reality. It angers me; but still, Remaining is the better option.

The problem is that this idiotic tribalism leaves no space to ask reasonable questions and it is fracturing any chance of a constructive politics in the UK. Both sides are to blame.

And when the worst case scenario doesn’t happen? More public trust will just be flushed down the toilet. There’s plenty to worry about in UK politics but, in the face of hyperbole, scepticism is a responsibility.

The Projects Fear have become interchangeable in our new global politics of doom. The Russians are coming? Roll out a security ‘expert’. Threat of a left wing Prime Minister? Where’s Tom Watson. A challenge to rule-by-European-Commission? Find me a Sturgeon. Pressure on the integrity of the UK? Bring out Gordon Brown.

Tell the scariest story you can (and make one up if need be). Persuade the population that the only safe place is here, right now, like it is right now, exactly like now. The future is scary; defeat the dreaded populism not with hope but with fear.

People fighting for a better future are left with the wreckage of more political rhetoric of anger and mistrust, dishonesty and exaggeration.

Scottish independence will not be easy; I’ve never said it would be. I’ve said it will be really hard work and require courage, vision and commitment. I’ve never said there were not problems to solve; I’ve dedicated my life since 2014 to trying to solve them. I believe that politics works best when it can admit its own weaknesses, when tribes are not absolutist.

But I feel out of my time. Hard work is out of fashion if hysteria can fill the gap. Bollocks to Brexit says Jo Swinson because she hates crude populism. For the love of god political classes, could you listen to yourself for a minute?

To save the village we had to destroy the village. You understand that, don’t you? Perhaps we didn’t tell the complete truth, but we had to save you from yourselves. Now please trust me on climate change because it’s really, really important. What do you mean you don’t believe me?