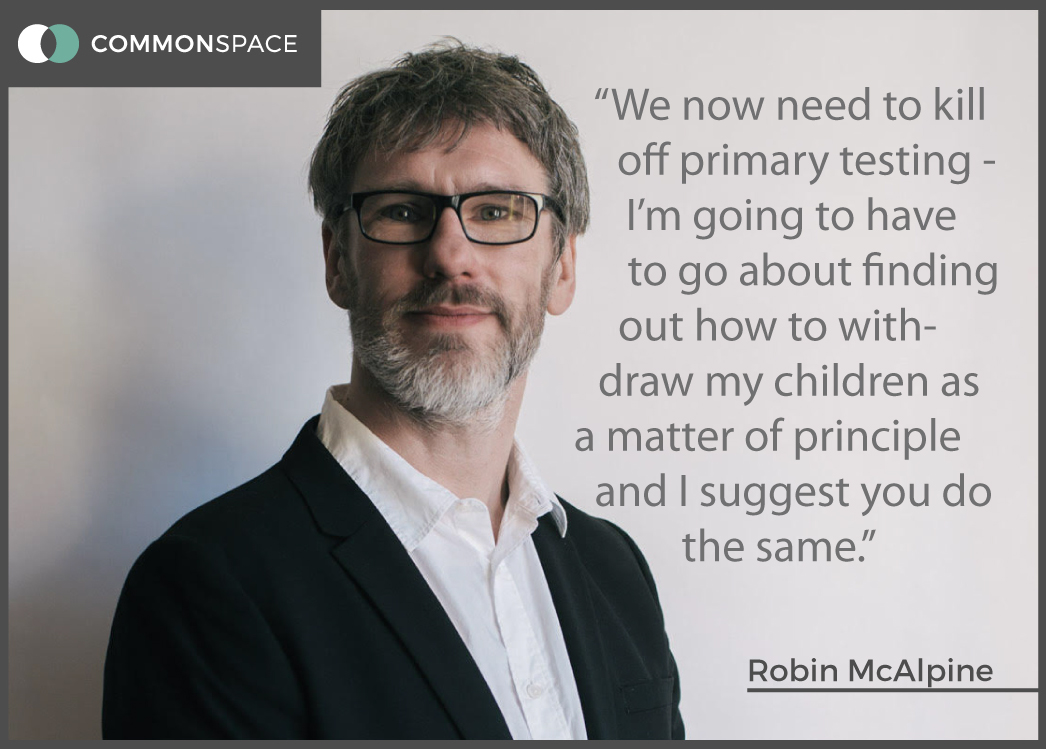 Common Weal director Robin McAlpine argues that the Scottish Government has made a mess of education policy, principally because it’s approach to policy-making is uninformed, top-down and half-baked

AS THE Scottish school holidays peter out, parents’ minds turn to all those little back to school jobs that need done. But the challenges for the Scottish Government over the coming school year are somewhat greater than buying lunchboxes and pencil sharpeners.

Let me start by saying that I have little patience for much of the media’s version of what’s wrong with Scottish schools. Almost every educationalist in the world knows that league tables are bad for education – but ‘luckily’ our newspapers know better.

Success for them is only ever measured in terms of a single number, the magic ‘how good is your education’ number. And the way to get better on these terms? Don’t bother educating, just train pupils to do whatever makes the magic number get bigger.

Another thing that is important to state is that the Scottish Government has done a couple of really good things in the field of schools and early years. Baby boxes sure, but mainly the expansion of nursery education is the closest thing this administration has to a keynote, transformational policy.

I want to start with these points because the story gets worse from there. There are genuine problems in the Government’s education agenda and they are virtually all of its own making; it is the troubling approach to policy development which is the real problem.

To explain, let me take the case of baby boxes. This is a policy imported from Finland and by chance I was in email correspondence with one of the originators of the Finnish policy at the time the Scottish version was announced.

I asked him what he thought and he seemed unconvinced. In Finland the point of the exercise was to encourage as many soon-to-be parents as possible to undertake a programme of training, development and support during pregnancy to make them better parents when the time came.

But it was optional so those who signed up got a baby box at the end as an incentive. As my Finnish contact pointed out, in Scotland we kind of just skipped the whole point of the policy and jumped straight to the ‘incentive’.

You’d almost think that someone, somewhere heard of a thing called baby boxes, decided that would make a nice announcement and so started commissioning baby boxes but missed the point.

Still, missed opportunity or not it’s hard to feel bad about baby boxes. Likewise, anyone not enthusiastic about the increased hours of free nursery is myopic. It changes lives.

But it has to be done properly. Common Weal was so enthusiastic about the possibility we put a lot of time into policy work to explain how to get it right. The challenges were simple – capacity and quality.

There were three overwhelming recommendations we made (and costed). First, this needed to be universal public provision, not a voucher scheme or an outsourcing job. Second, it needed an immediate investment in the building of nursery provision to meet the expansion. Third (and a real priority) it needed an immediate boost in the workforce by getting a lot of new staff into training quickly.

Instead Nicola Sturgeon appeared to announce a kind of voucher scheme and then rolled back from it (under pressure from within her own administration) and only belatedly put the extra money into the policy that was needed.

READ MORE – Back to the blackboard: Education bill’s demise marks a chance for @ScotGov to reflect on its approach, experts say

The result is not only predictable but was clearly predicted – a logjam putting the delivery of the policy at risk. Why the Government didn’t listen to the many groups who warned them that more had to be done is a bit of a mystery.

Again, it sometimes feels like the announcement was the important thing, the actual delivery just a detail.

But it’s in school education that things start really to go wrong. At primary level the queue of people telling the Scottish Government not to introduce mandatory testing was lengthy and those in support were sparse-to-non-existent.

Yet for reasons that seem little more than hubris, the government decided that the educators and parents were wrong and data from testing was essential to ‘close the attainment gap’. So on they tanked.

Many of us warned about the impact this would have on children. I took this personally because my children are primary age. So it came as no surprise to learn that teachers are dealing with distraught pupils in tears at the pressure. That’s five-year-olds folks.

READ MORE – Doaa Shabbir: If educational progress is not about uplifting a whole generation, then it is not progress at all

In this case it really feels like the government kind of blurted out a half-baked proposal designed to appease the right-wing media and then forced this terrible idea through to save face despite having no support.

This seems also to be the problem at high school level. Here Nicola Sturgeon seems to have done a day trip to London, spent the day with Blairites and then came back and announced high school governance reform which, again, had virtually no support in Scotland.

Even worse, in what I can only think of as a moment of rashness she asked for her whole administration to be judged on closing the attainment gap. But every serious educationalist knows that attainment is mainly a function of complex social and economic circumstances which do not get turned around in a couple of years – especially not in the middle of UK-driven austerity.

I don’t know how many times I pointed out this policy was doomed to fail given that it was incredibly unpopular and could only have been delivered via a right-wing coalition with the Tories. And predictably enough, failure is precisely what happened.

I really feel for John Swinney and other Cabinet Secretaries and Ministers involved in schools and early years policy. None of this agenda came from them, none of it originated from inside their departments and none the inception involved teachers, parents or educationalists.

And yet they’ve all been left carrying the can, loyally trying to implement badly-conceived ideas with no support which were doomed to underperform or fail.

Setting aside my ow political views about policy, I also have a strong interest in the process of good government. This is not it. Oracles handing down instructions and expecting others to make half-baked ideas work is a recipe for exactly the kind of failures we’ve seen.

I care deeply because of my politics but also personally because this will shape the lives of my children. The government gets quick headlines and we get overcrowded nurseries, children in tears and the cult of personality instead of a proper analysis of the future of education. And the Curriculum for Excellence (still a really good model) becomes collateral damage.

But I also care because I support independence and I need a pro-independence majority at the 2021 Scottish elections. What happens if the public take Nicola Sturgeon at her word and judge her on education? I mean, in private, what’s your opinion – pass or fail?

The education bill is now dead, baby boxes are what they are and nursery education is still a step forward even though the step is more arduous than it should be.

We now need to kill off primary testing – I’m going to have to find out how to go about withdrawing my children as a matter of principle and I strongly suggest you do the same. A boycott killed off testing when it was Michael Forsyth’s policy and it can do it again now. ‘Do no more harm’ must be step one.

Step two is that we need a discursive and engaged government where policy-making isn’t the preserve of individual imaginations but involves deep and meaningful engagement with the key stakeholders well before anyone opens their mouth with apparently magical solutions.

This really matters. The deal with indy supporters was that we’d be loyal and the government would be competent. In education they have not lived up to their end of the deal but have asked to be judged on it anyway. I worry about what the verdict will be.