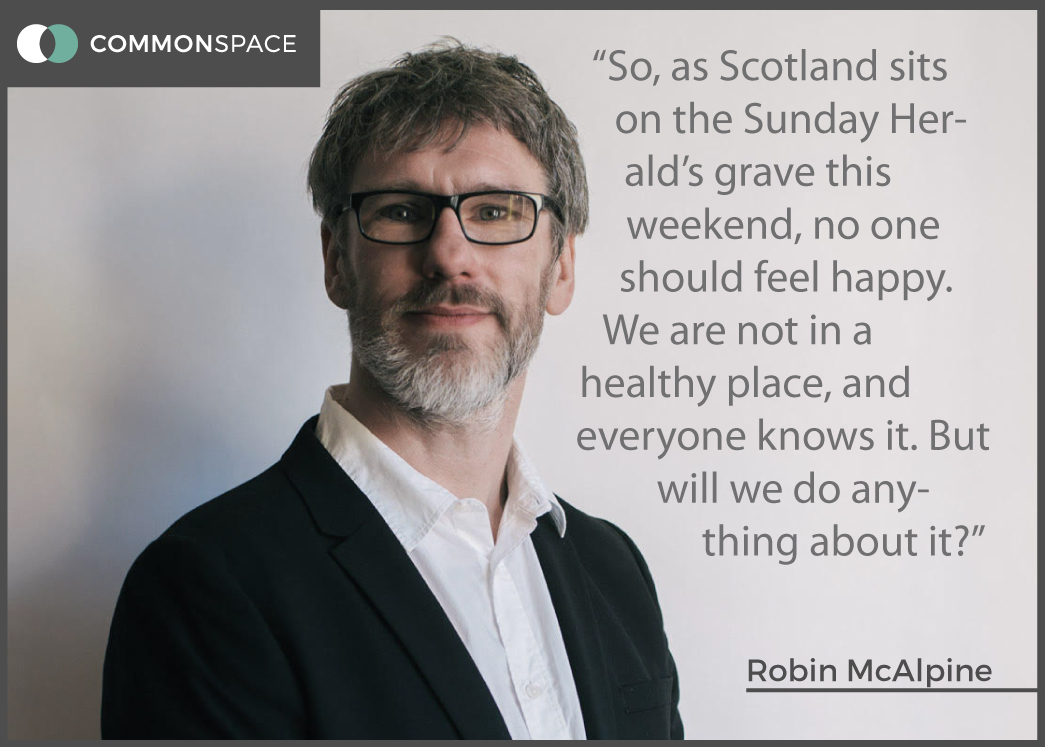 Common Weal director Robin McAlpine argues that the end of the Sunday Herald, which will publish its last paper on Sunday [2 September], must spark a serious debate about the future of media in Scotland

AS A NEW millennium was approaching and the new Scottish Parliament was just beginning, something happened in Scotland which reflected the future I hoped for.

It was called the Sunday Herald. Launched in 1999 by a newspaper visionary (Andrew Jaspan) it was modern and stylish, Scottish but cosmopolitan, serious but playful. It was always of a high quality and you didn’t want to miss it.

It was, in its way, a statement of what I hoped would follow. It was equally comfortable reporting what was happening in Scotland and what was going on in say New York or Paris. You just didn’t feel a cringe, as if what happened here was all second-order, slightly embarrassing.

It covered Scottish arts and culture with confidence, putting it alongside an internationalist perspective on the arts. And it never made Scotland’s culture seem like it was in second place.

And, from my memory, it did something which few newspapers manage – it had ‘lifestyle’ content which felt relevant and almost urgent, entirely unlike the vacuous shallowness of another lengthy Guardian article about how Love Island is important social commentary.

On a Sunday morning, it made Scotland feel like part of the world and it made you feel like Scotland might be part of a global conversation, not just an observer. It was exciting.

The paper lost Andrew Jaspan to foreign climes fairly early on and it definitely lost a little of his visionary leadership, but he left firm foundations and it continued to be an essential read.

It was only to be 15 years from its launch until Scotland would vote in an independence referendum. The approach of that vote led to a ‘second blooming’ of the Sunday Herald; editor Richard Walker took a brave and far-sighted decision to back independence.

That opened up a whole new world of possibilities. Like automations from another age, the rest of the media followed an archaic script, clinging firmly to an establishment narrative. While I exempt a number of individual journalists from this generalisation, they simply missed what was really happening in Scotland.

It was the Sunday Herald (along with online platforms like Bella Caledonia) that became the place you would go for any real visionary thinking about Scotland’s future.

If you wanted a lecture from Gordon Brown about why we should all stick closely to the Westminster elite or risk being ripped out of Europe, you were spoiled for choice. If you wanted to hear anything from a vast, exciting and rapidly developing new movement of women, environmentalists, artists and cultural figures, of economists advocating an alternative and internationalists with a different vision for Scotland in the world, there was only one place.

I have very personal reasons to be grateful for its existence. It was on a Saturday night that I got a phone call from a Sunday Herald journalist. There was some despair; it was under two years to go to the independence vote and the official campaign was just listless and cautious and dull.

Did we (I was with another think tank at the time) have anything more interesting, exciting, uplifting?

We did. We had a policy paper on how a series of economic interventions could begin to move Scotland in a more Nordic direction. But who really knows what Nordic means?

So on Monday morning I emailed a group of sympathetic artists and writers asking for a name, something Scottish that captured the idea. It was Ruth Wishart and James Robertson who replied immediately saying ‘call it Common Weal’.

I did a search and replace on the document, emailed it to the journalist, and that’s where it started. Many others followed – great work from Women for Independence, from the Radical Independence Campaign, from Business for Scotland and many more. For me, the Sunday Herald made Scotland feel thrilling again.

But the people who manage the Herald group of newspapers seemed to become less and less comfortable with the association with the independence movement once the vote was over. In their mind what happened was a passing fad.

Remember, a Herald editor had been part of ‘Team Glasgow’, a private network of Labour Council types, local businessmen and other members of the Glasgow establishment. They believed they should be coordinating to set the agenda for Scotland, all behind closed doors.

That editor, Donald Martin, is now the editor-in-chief of the Herald group. And this weekend his axe will finally fall on the neck of the Sunday Herald.

We will now get a seventh day of the daily Herald instead. Welcome back to a Scotland as seen mainly through the eyes of local businessmen.

We will also get a seventh day of the National. Much as I admire that newspaper and its editor, I worry that it looks more and more like its owners are treating it as a ‘quarantine zone’ for independence supporters, somewhere they can be parked out of the way so as not to upset the balance of the Herald’s establishment viewpoint.

It’s not just than an independence-supporting newspaper is gone, it’s that there isn’t a single Scottish newspaper that I believe could currently even aspire to the quality and impact of the Sunday Herald in its prime, even well before its conversion to independence.

And as always I want to make clear that I really do empathise with many in the industry. Few days pass where I don’t feel startled at the collapse in resources available to Scotland’s newspapers. You could barely put out a decent local newspaper with what some of them are working with.

We’ve reached a point where we may see some kind of death spiral. I’m not sure where I stand on it. On the one hand, if we stop buying newspapers they will die back further and our democracy will be much weaker for it.

But if we start buying a lot of the dross that passes for a newspaper in Scotland, those newspapers may start to develop delusions of adequacy.

It’s a real dilemma – this is a matter of crucial public policy. But newspapers believe themselves to be above and beyond public policy, its judge and jury and certainly not its subject.

Alternatives are one option. I think CommonSpace (run and funded by Common Weal but editorially independent) is doing a great job. But we have three (soon to be four) journalists and an editor. We cannot cover everything that needs covered in Scotland.

Propping up the existing print media isn’t the solution. Letting it all collapse certainly isn’t the solution. Thinking we can get by with online alternatives (unless there is substantially more funding) isn’t a solution on its own either. And anger or frustration at the whole damned mess is inevitable but no route forward.

The more the Scottish Government has faced problems, the more risk-averse it seems to become. Intervening in media policy is always controversial because the media controls the story and does not like democratic interference. I see little sign of any kind of government intervention in the near future.

That Sunday in 1999 when I first opened the pages of a Sunday Herald and saw in them something like Scotland’s future seems a long time ago. In too many ways it seems like we’ve gone backwards. In too many ways our newspapers seem content or even happy that we’re going backwards.

This is too important an issue to become nothing more than a bit of collateral damage in a battle between unionists and independence supporters, even if that is what has put the urgency into the conversation.

So as Scotland sits on the Sunday Herald’s grave this weekend, no-one should feel happy. We are not in a healthy place, and everyone knows it. But will we do anything about it?

ENJOY READING COMMONSPACE? Click here to get our daily newsletter so you never miss a story?