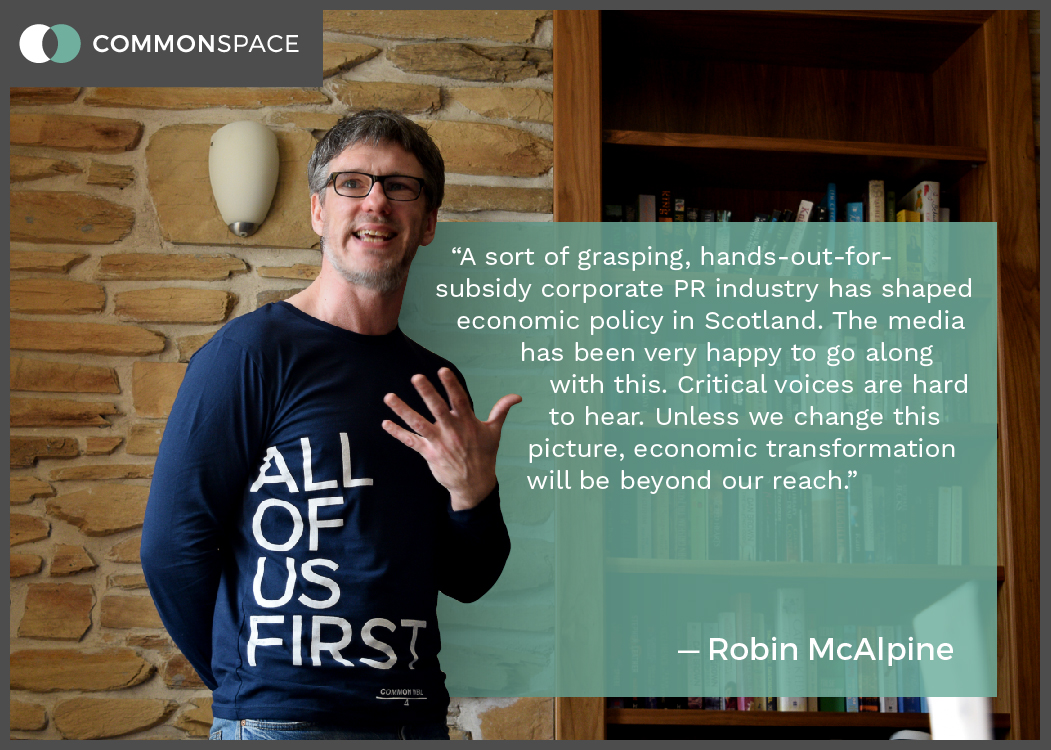 WHAT do you get to hear about the economy in Scotland? You'll almost certainly have heard things like 'new supermarket to bring a thousand jobs to your area' or 'tax and regulation closes small businesses' or 'cutting this tax will free us up for growth'.

How often do you hear someone saying 'no, that's not true'? And what happens to your view of the economy and how it works if you never hear voices saying these things?

These questions has been irking me this week. Common Weal has now produced two economic impact assessment reports in the last six weeks. The first raised substantial questions about whether the economics of fracking are anything like as secure as presented by the industry side. The second pointed out that there is a very substantial chance that if the Scottish Government cuts Air Passenger Duty it will not only require a cut in public services, it will actually shrink the Scottish economy.

Much as the media likes to represent itself as a fearless seeker-of-truth, the truth that it finds quite often seems to be the one with the bigger PR budget or the larger perceived celebrity or prestige.

We press released both of these reports and phoned round newspapers to make sure they had received and read the release. As far as we have seen, neither received so much as a sentence of coverage in the mainstream print or broadcast media.

This is a pattern which has been ongoing for as long as I can remember. Much as the media likes to represent itself as a fearless seeker-of-truth, the truth that it finds quite often seems to be the one with the bigger PR budget or the larger perceived celebrity or prestige.

It does not require any evidence for this. It does not even need to be shown to have been correct the last time it said the same thing. It does not need to face alternative commentary pointing out that tiny fractional changes in tax are nothing like sufficient enough to cause the important but utterly routine and entirely local small businesses that make up much of the Chamber's membership to pack up their curling tongs and clear their shelves of Rice Krispies and relocate to Monaco.

The Scottish Retail Consortium and others got equally unquestioned coverage for claiming that an increase in business rates for supermarket-sized commercial premises would put otherwise 'viable' enterprises out of business. That too was covered purely on their say-so.

No matter how many tax cuts they get, business representative organisations always claim to be on the brink. And in Scotland you can be fairly confident that the media will report it pretty much exactly as vested interests want it reported.

Personally, I doubt that there are any 'viable' businesses of that size for whom survival is so wholly related to such small elements of their standard overheads.

Anyway, haven't we been hearing this for 40 years now? No matter how many tax cuts they get, business representative organisations always claim to be on the brink. And in Scotland you can be fairly confident that the media will report it pretty much exactly as vested interests want it reported.

(For a number of years it has been clear that the airports in particular have been able to promote their latest pet project in the broadsheet media as if it is pet in-house PR fluff. GARL in Glasgow, trams in Edinburgh, APD for the whole nation – no amount of extravagant expenditure seems to be too much for the newspapers not to parrot it uncritically. The BBC covered APD by going to an airport and asking people if they'd like money off their flights. Woodward and Bernstein this is not.)

I wish it was just the media that was so quick to overlook any challenge to the opinions of business representation organisations. Far too often public bodies, civil servants and elected officials are content to overlook questions about the economic impact claims of businesses.

Which is really quite unacceptable because there is really good official guidance on how to assess economic claims – it's called the Treasury Green Book. It sets out what is legitimate and what is not legitimate, what assumptions are reasonable and what omissions are unacceptable.

I wish it was just the media, but far too often public bodies, civil servants and elected officials are content to overlook questions about the economic impact claims of businesses.

So for example, the standard trick of supermarkets saying 'let us pitch up in your town and we'll bring X hundred jobs' is pure PR. To be solid evidence, the Green Book requires that it breaks these down for temporary construction jobs and permanent service sector jobs. But it also requires that this number be offset by any jobs which will be displaced.

Supermarkets never do this. They never say 'five hundred new jobs – minus the six hundred jobs in the local economy which we will destroy by closing down local small businesses'. The Green Book makes clear that, in this case, the supermarket's claims should be dismissed. Unfortunately, that is very often not what happens.

So let's look at the two Common Weal papers. The first, on fracking, looks at the market value of gas and the extraction costs of non-conventional gas extracted through fracking. Fracking is substantially more expensive to do per unit of gas recovered than is conventional gas. The market price range in which fracking remains viable is much narrower than is generally understood.

And if that narrow viable window in global gas markets is exceeded, fracking in Scotland could become economically unviable. Thankfully the fracking companies have massive lobbying and PR budgets so as soon as they do become unviable they'll be back looking for public subsidies – just as the North Sea oil industry is just now.

Additionally, the productive lifespan of wells is short – perhaps about five years. After that, all that local economic benefit which you've been told about packs up and moves on. You're back where you started but with your house values decreased. And that's assuming that the fracking companies bother to complete remedial work properly in precisely the way that the opencast coal industry so brazenly didn't. (Guess who's paying for that to be done?)

So people are exploring how to fight back against this. A number of us are having early informal discussions about whether we could create a coalition to challenge the narratives of the big business lobby.

The case of an Air Passenger Duty cut is even dodgier. Our report on this very quickly noted that there are absolutely unacceptable omissions in the case put forward by the aviation industry. Their own claims accept that the majority of the money they are demanding be cut from public services to fund their own tax cuts will have no impact.

That's because business flights (a clear majority of flights taken) are not price sensitive. A few quid off a flight causes businesses to take not so much as one flight more or less. The airports accept this. They claim that the economic impact comes from tourism.

But they then proceed to 'accidentally' miss the important detail. In fact, tourism coming into Scotland is not very price sensitive. If you're flying from the US to see the Scottish Highlands, you've chosen a pretty high-cost holiday. Again, a few quid on a flight isn't an issue.

Outgoing tourism is different. It is much more price sensitive. Slightly cheaper flights discourage Scots to take holidays in Scotland much more than it encourages overseas tourists to come to Scotland. So if you're staking the case of this proposal on economic benefit, the likelihood is that it will actually reduce the size of the Scottish economy.

I think I'll restate that because it's such a surprising conclusion. No-one is claiming that cutting APD would generate enough growth in tax returns to cover the cost of the tax cut. So it will almost certainly require a cut in public services to fund it. But it's worse than that – it could very easily actually shrink both the economy and the tax base (even if only very slightly).

Common Weal is in discussion with funders of transparency work internationally to see if we can secure a post, the sole purpose of which would be to research, investigate and monitor lobbying and corporate capture in Scotland.

But unless you read CommonSpace or sign up from news directly from Common Weal, you won't have seen any of this. You'll probably believe that the only criticisms of cutting APD or of allowing fracking are environmental. I even know environmentalists who think that the economic case for both is sound.

I have written a lot on the problem with the economic discourse in Scotland and why we should be substantially concerned about the power of lobbying in Scotland. In all of the cases above it has been far too easy for the business lobby to fill a policy vacuum with their own propaganda. And it has been far too easy for them to do it without challenge.

The situation is getting so bad that many mainstream organisations which have doubts about this economic narrative are growing concerned. One senior figure described the airports' case for an APD cut as one of the worst economic impact studies he'd ever read and dismissed it outright.

So people are exploring how to fight back against this. A number of us are having early informal discussions about whether we could create a coalition to challenge the narratives of the big business lobby. Despite a number of substantial, serious organisations saying different things, they don't get listened to in the way the business lobby does. So perhaps if we can come together in a coalition those voices will be heard.

Common Weal is in discussion with funders of transparency work internationally to see if we can secure a post, the sole purpose of which would be to research, investigate and monitor lobbying and corporate capture in Scotland. It is a substantial worry that we are probably the only parliament in Europe which does not have so much as one person dedicated to this task.

It is a substantial worry that we are probably the only parliament in Europe which does not have so much as one person dedicated to this task.

And the Scottish Alliance on Lobbying Transparency (Salt) which fought hard to gain a few concessions on the Lobbying Bill will be renewing efforts to make sure that the regulations put in place when the proposed lobbying register is launched are as strong as possible.

I have some optimism over this. Since devolution Scotland has lumped economic development in with the finance role in the Scottish Cabinet. Yesterday those two roles were separated and the economic development role has been taken by Keith Brown, a minister who has been effective, even-handed and fair in other briefs.

He arrives in a portfolio which will be closely scrutinised. Unemployment, productivity, innovation, business growth, 'inclusive growth' – right now the picture in Scotland isn't all that rosy. We've been doing whatever the business lobbies ask and it's not been working.

A sort of grasping, hands-out-for-subsidy corporate PR industry has shaped economic policy in Scotland. The media has been very happy to go along with this. Critical voices are hard to hear. Unless we change this picture, economic transformation will be beyond our reach.