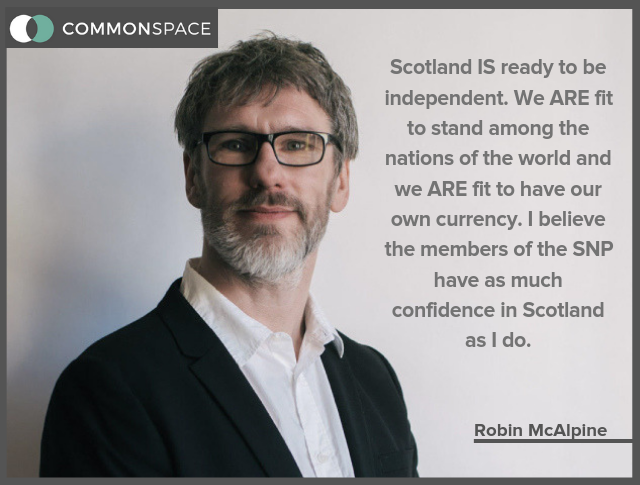 Common Weal director Robin McAlpine argues that the SNP currency vote at its Spring conference next month is a monumental choice: do they want to fully embrace a Scottish currency, or accept a hugely damaging fudge?

HISTORY is just choices. In about six week’s time the delegates to the SNP’s spring conference are going to be asked to make a choice. It’s a momentous choice and the implications are enormous and wide-reaching. It will be a crucial chapter in Scotland’s history.

So are the members being helped to make a good choice or are they being corralled into making a very bad choice on the basis of pure loyalty to the leadership? I’m afraid it’s hard to believe that it’s the former – and that’s profoundly concerning.

It’s important to be sharply focussed on the choice ahead. That is only possible if you disregard what you’ve read in The National and may have seen on a couple of TV programmes – SNP members are categorically NOT being asked to support the establishment of a Scottish currency.

They are being asked to adopt, almost without any change, the Growth Commission’s proposals. If you’re being really generous there are two sort-of concessions to the overwhelming majority of members who turned up at the National Assemblies and made clear how hostile they were to the Growth Commission package.

The first ‘concession’ is that the fiscal rules which were such a central part of the proposals are simply not mentioned. Despite being caveated with ‘austerity is bad’, they really were making austerity (or something indistinguishable from austerity) unavoidable.

But this isn’t much of a concession – because of the continued existence of the six tests that will have to be met before the currency is introduced. Test One is that public spending must contract in relation to the economy. Test Two is that global financial markets must be content with Scotland’s tax and spend policies.

You might wish to argue that, taken together, those won’t mean inescapable and permanent downwards pressure on public spending – but your argument wouldn’t really be plausible. Hiding the bit where you say you’ll do austerity isn’t the same as not doing austerity. It’s an almost unavoidable consequence of the six tests.

The second ‘concession’ is just as weak. It can be summarised as ‘we will give you an update on our timetable for introducing a Scottish currency at some point in the six or seven years after a successful vote for independence’.

‘Don’t ask for any commitment, just sort of trust us’ would be a maddeningly weak concession in itself – but it is overruled by the commitment to the six tests anyway.

Those proposing the conference motion have effectively been saying that the six tests ‘could’ be met in the first four years of an independent government. It would be excessively generous to call that even optimistic. Slash the deficit? Please the global bankers? Magic currency reserves out of thin air? Decouple from the UK economic cycle (while still using their currency)?

In three years (so a vote could be held in year four)? That’s fantasy stuff. All that is on the table is an annual parliamentary review of what progress is being made towards achieving those tests. Calling that a commitment to a new currency is (and I’m trying to be diplomatic here) a statement with little relationship to reality.

So will this be properly debated and tested? Again, it’s a little hard to have confidence. Had this motion been submitted by any branch in the party it would have been ruled incompetent purely on the basis that it is virtually impossible to cover its full contents in a single debate.

It ties the party to a full economic programme, to a specific negotiating stance and to a very specific set of currency arrangements. Making a serious attempt to explore all of these in the time available simply isn’t feasible.

People are being asked to go on trust – but many will find that hard given that they were previously promised that the leadership would listen and respond to their views on the Growth Commission. I’ve seen suggestions that those who attended National Assemblies were broadly enthusiastic, but that is (again, diplomatically) sharply at odds with what the people who were there think.

Everything has been stage-managed to prevent any forensic analysis of these proposals. The Growth Commission got to present a heavily redacted version of their proposals – with no proper Q&A and no counter proposition being presented. People where then shepherded to separate tables such that no consensus could emerge.

This is really important. I have contended from day one that the Growth Commission report is absolutely filled with major errors and enormous risk. Common Weal, over and over, has posed sensible questions about this.

For example, what is the plan for entering the European Union, which is impossible if you’re using someone else’s currency? And what would happen in the event of a financial crisis in London while we were still Sterlingised?

Just to repeat myself for the umpteenth time, none of the usual policy responses to a financial crisis would be available to Scotland – no control over interests rates, no money creation, no opportunity for major fiscal expansion, no way at all to guarantee liquidity…

And yes, I know many people find these issues difficult, so let me illustrate. Had the UK only had the Growth Commission powers during the 2008 financial crisis it couldn’t have cut interest rates, couldn’t have bailed out the banks, couldn’t have undertaken quantitive easing and would have – at minimum – extremely high borrowing costs to access Sterling.

Make no mistake – the UK would have required a major bailout from the IMF and the economy would have been devastated. So why on earth is it impossible to drag an answer out of Growth Commission advocates on what the hell they think would happen to Scotland?

Again, this is probably difficult for a lot of people to assess – so think in these terms. There are queues of respected economists who have come out and said that these proposals are not fit for purpose and that an independent Scotland needs its own currency (Varoufakis and Stiglitz only being the most recognisable). Can you name me any economist independent of the commission lining up behind these proposals? I can’t think of any.

If the SNP leadership had wanted its members to make an informed choice it would have allowed proper debate including opponents and critics. They would have presented a short motion proposing only the six tests approach and debated the economics and negotiating stance separately.

They would have provided members clear, unambiguous information. They wouldn’t have preceded the publication of the motion with what I’m afraid amounts to a misinformation campaign.

So what’s going on? I think there are two issues here. The first is that I think this is happening largely to save face. Nicola Sturgeon was so closely associated with the commissioning and launch of this document I think it is being forced through for primarily cosmetic reasons.

And that’s the second factor – I don’t really think that the SNP leadership properly understands the issues. Seen through the lens of wanting to look strong, all the glaring, fear-inducing flaws and problems with this motion have simply been met with denial. Fingers in the ears, ‘la la la can’t hear you’.

I mean diplomatically (again), if you’re saying that there are other countries similar to Scotland which are ‘dollarised’ (the usual term for using someone else’s currency without permission) then you’re confused. There are a total of four – Ecuador, Lichtenstein, Panama and Montenegro. No advanced exporting nation has ever been dollarised.

And frankly the use of the Irish example in the motion shows the scale of the desperation – it was a century ago, Ireland was a largely agrarian nation which had just come through a devastating occupation and civil war and almost everyone accepts that it was a disaster for their economy anyway. Is that the best reassurance they can offer?

This issue is so overwhelmingly fundamental that it cannot conceivably be a trade-off on a face-saving exercise. It must be seriously interrogated. If it is, no-one will vote for it. This is political and economic suicide and I honestly think pushing this through without proper debate is a betrayal of this nation.

I fear the last card the leadership is going to play is to hint to members that this is, effectively, a vote of confidence. That’s just not true – rejecting, remitting back or very heavily amending this motion will certainly not cause the fall of the SNP leadership.

What this motion is, is a vote of no confidence in Scotland. It is a motion which says we’re not fit for our own currency. I am one of many who believe that, if Scotland needs six tests to decide whether it is ready for the proper monetary framework of a normal independent country, we’re not ready to be independent.

But Scotland IS ready to be independent. We ARE fit to stand among the nations of the world and we ARE fit to have our own currency. I believe the members of the SNP have as much confidence in Scotland as I do. That’s why I believe they will reject this motion and support the immediate establishment of a Scottish currency as soon as Scotland is independent.

Fund the Media YOU deserve