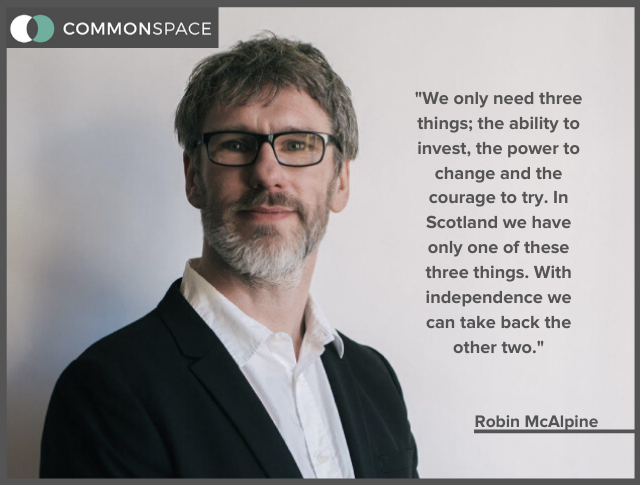 SO THIS is to be a General Election where independence is put at the heart of the campaign. Great. But what exactly would that sound like?

The first thing to say is that a campaign that really puts independence at its heart will feature many statements which sound like ‘with independence we can…’ or ‘independence can let us…’. That would be followed with things that sound like a normal election – a proper pitch to an electorate about the kind of country being offered.

The second thing to say is that such an election would aim squarely for the ways in which Britain has failed the people of Scotland. That does not mean ‘who gets on Question Time’ but rather why people keep getting poorer. It’s not the democratic system that hurts people, it’s the economy.

Which is the third thing you’d want to be hearing, were this an election with independence at its heart – really confident answers to the questions raised by unionists. You know the list…

Finally, the case for independence has been on the back burner for so long that getting people to see it as a priority right now requires effort. There needs to be a case for why it has to be now and not be tied to a final Brexit outcome still years away.

So if we were to put all this together, how might it sound? It’s been a busy week and I’ve not had time to think about it in detail – but it would sound something like this.

With independence, Scotland can become a nation ready and willing to face up to the tasks ahead – and those tasks are enormous.

Scotland has been stripped of investment and prosperity by a London economy which absorbs more than twice as much of the UK’s wealth than does any other European capital city. It’s not the ordinary people of London who take five times the fair share of our wealth, it’s the institutions. How can Scotland build without its own prosperity?

We need an economy that serves Scotland and its people – and we don’t have one. So we need to build one and we need to do it now. If we don’t, another generation of Scots will grow up with the inequality that comes when London’s bankers are put first and Scotland is always an afterthought.

That economy will be what the UK economy isn’t. It will be productive, based not on the gambling of the banks and the greed of property tycoons but the abundant resources of the Scottish nation.

Those resources are the envy of the world. Our land is rich and fertile, begging to fuel not the grouse-shooting weekends of southern financiers but the ingenuity and creativity of the Scots. With those resources we can build incredible new industries with great jobs for people who desperately need them.

Our seas are filled not just with fish but with power; the power to make Scotland a world-leader in the fuel of the future. Because the world’s demand for hydrogen will very soon outstrip its supply and no-one is better placed to lead than Scotland. We can literally make it out of our seas.

Our people are among the most educated in Europe, their skills too often being wasted in an economy where the good jobs are hoovered up by a distant capital city, Scotland getting only the scraps.

Scotland has the lowest level of business headquarters in Europe. We don’t have our own economy, we have the leftovers of someone else’s economy. And it isn’t good enough.

Because that economy has left us with a failed banking system which everyone knows is one more scandal away from another crisis. It has left us with an economy with too few good jobs, workers forced into insecurity with low pay and little respect.

And god help them if they lose those jobs, because the welfare state which a previous generation built as an antidote to poverty has become a prescription for starvation and humiliation. It shames us – but Scotland can do nothing.

And it can do nothing for those afraid to be the UK’s dumping ground for nuclear weapons; a disposable nation first into the flames of a nuclear war.

Because for many people the biggest of all of the crises we face is the environmental crisis. Climate change, plastic pollution, dying wildlife, soil that is losing fertility, resources that are running out. We do not have time to waste – we must act now.

And with our land, our seas, our energy potential and our engineering prowess, Scotland can defeat every one of these crises. We could be the nation the world looks to.

All we need is an ambitious Green New Deal for Scotland, a reset on the failure of the economy we have. It cannot be a one-size-fits-all where Scotland gets expensive nuclear power because London needs it. It must be in Scotland for Scotland.

And we simply cannot let every step towards that Green New Deal be rolled back by the lobbyists who wield so much influence at Westminster, demanding that they can keep burning oil, keep dumping plastic, keep bathing us in pesticides, keep grasping and grabbing and wasting. Just a little more time…

We have a clear, thought-through and properly-tested plan for building a new independent Scotland. This is not the embarrassing mess of Brexit but the confident, calm and prepared rebuilding of the post-war years.

We only need three things; the ability to invest, the power to change and the courage to try. In Scotland we have only one of these three things. With independence we can take back the other two.

But when you vote you do have the power of change at your fingertips. Do you support this vision for an independent Scotland? Is it a future you believe in? If it is, find your courage.