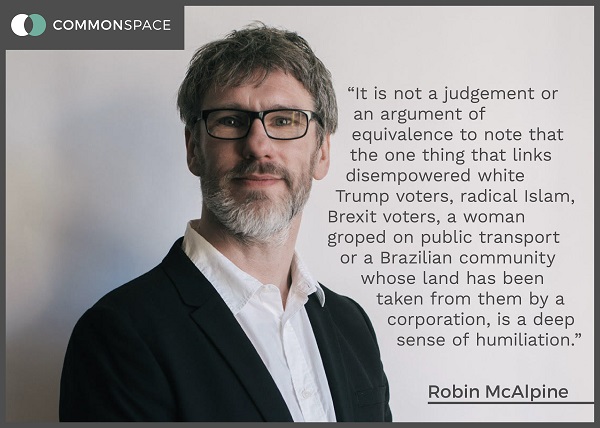 CommonSpace columnist and Common Weal director Robin McAlpine says it’s possible to turn the tide of anger and violence, but we must first be honest with ourselves

DEPRESSINGLY, it is starting to feel like the suspension of campaigning during an election in the face of some tragedy or atrocity is becoming more common than not. Even more depressingly, I see no obvious or immediate set of circumstances which will reverse this trend.

But if we were just a little more honest with ourselves about some of the root causes of the ‘rise of angry’ then it does not seem impossible to me to take a shot at living as better people.

Because above all I really hope that this column doesn’t give the impression that I want to ‘blame’ any single group, philosophy, political outlook or cultural attitude for this problem (although we need to not kid ourselves on about serious elements of culpability).

If we were just a little more honest with ourselves about some of the root causes of the ‘rise of angry’ then it does not seem impossible to me to take a shot at living as better people.

Rather, what I have increasingly come to believe is that we have stopped talking about ‘the human condition’ and thinking about what it means for our future.

Whether it was positive or negative (and of course, it was a mix of both), religions were deeply interested in the human condition – the meaning of good and evil, right and wrong, what’s kind, what’s selfish.

It was often clumsy (James Hogg’s Confessions of a Justified Sinner is a brilliant dismantling of religious moral certainty) and certainly if you were a woman, a minority or a heretic it could be brutal and insidious. But it asked the question.

The Baby Boomer generation, however, largely dispensed with such concerns in favour of a kind of narcissistic individualism. What you feel is good. Be true to yourself. Follow your dreams.

Unfortunately, this philosophy did not really have a structure for differentiating between the dreams of an artistic hippie and the dreams of a motivated psychopath. Generally, I think it would probably be better if psychopaths and sociopaths didn’t be true to themselves and follow their dreams. And about one per cent of the population falls into this category – or around about 600,000 people in the UK.

The Baby Boomer generation, however, largely dispensed with concerns about the human condition in favour of a kind of narcissistic individualism. What you feel is good. Be true to yourself. Follow your dreams.

(The ratio among CEOs is one in five.)

But the problem doesn’t just lie with the extremes of the spectrum. In fact, every single human is born with a series of hard-wired ‘cognitive biases’ – faulty ways of thinking which have at some point in our genetic history enabled our species to survive.

So for example, risk aversion may have saved our hunter-gatherer ancestors from gambling away their winter food stores (those with a ‘gambler’s gene’ would, through the law of averages, gradually die out before passing on that gene). But it may now make us cling to certainty rather than believe in hope.

The halo and reverse halo effects mean that once we define someone else as either ‘good’ or ‘bad’ we can only see the good things and bad things about them respectively, wiping out the complexity and subtlety of them as real people.

Add to that confirmation bias (we grant much higher prominence to any piece of evidence that proves our pre-existing beliefs than anything that challenges them) and its quite easy to see that the so-called ‘social media bubble’ is in fact as old as humanity.

If you’re reading this you probably think you’re not racist or xenophobic. But you are – you were born to be. You prioritise your group (however you define it) over any other group.

Because whether you like it or not, you are born with ingroup bias. As social animals, humans need other humans to survive, so we create social groupings. Things that disrupt that social grouping (such as outsiders) are a risk and we learn to treat them with suspicion.

If you’re reading this you probably think you’re not racist or xenophobic. But you are – you were born to be. You prioritise your group (however you define it) over any other group.

So make no mistake, almost all of us over the last couple of days have felt a much deeper emotional response to the Manchester bombing than we do towards, say, the bombing of a marketplace somewhere in Iraq – even though we know rationally that those dead are just as innocent as our dead.

Hell, we even feel a deeper emotional response than we do when it is France that is attacked rather than us. We have a hierarchy of outgroups and we assess them largely according to how much they are like us.

None of this is pleasant to admit or nice to think about. But it’s true, and the less we face it, the more dangerous it becomes.

None of this is pleasant to admit or nice to think about. But it’s true, and the less we face it, the more dangerous it becomes.

The big mistake humans made was that we anthropomorphised ourselves. Living in the countryside (and as we have chickens and ducks and cats and goats), I get to watch nature at work every day. The more I do, the harder I find it to differentiate what it is about our psychology or our social order which is so different to that of other species. We’re just cleverer, not better.

And that, I fear, may be the problem. When I look at climate change, pollution, modern warfare, the depletion of natural resources so we can buy more plastic things we don’t want, the more I wonder if our technological intelligence has simply got way out of step with our emotional intelligence.

I hear multinational corporations lobbying for GM crops and it is absolutely not the science that scares me. We think we can just regulate ourselves to sanity (and we need to try) – but at times it feels like little more than handing a toddler an automatic weapon with the safety off and then working out the best way to regulate the situation.

I make no excuse for murder, for what happened this week. So when I say that I can find no excuse for drone wars, for rabid austerity, for endlessly rising inequality, I draw no equivalence, I only note a virtually identical series of human cognitive biases at work.

We accept that dead guests at a mistakenly bombed wedding in Afghanistan just don’t mean as much to us as dead children at a pop concert in Manchester. But because it was our ingroup that was targeted, we feel some shock that the corollary is also true.

Humans can suffer all kinds of deprivation – so long as it doesn’t come along with humiliation. And frankly, for many this is an age of humiliation.

This is where I think it is all going wrong right now. One of the hardest-wired emotions of all is status anxiety. As social animals, we measure our own worth by our sense of our own status in society.

We all crave respect more than we will ever truly admit, and we all fear humiliation much, much more than we realise. But we struggle to accept the same dynamic in others.

I can’t count the conversations I’ve had about how someone is fizzing angry about a nasty comment someone else made about them on social media (a conversation that drags on and on) – and all because of one (one!) comment they made about the other person.

Humans can suffer all kinds of deprivation – so long as it doesn’t come along with humiliation. And frankly, for many this is an age of humiliation.

Again, it is not a judgement or an argument of equivalence to note that the one thing that links disempowered white Trump voters, radical Islam, Brexit voters who feel their community is being changed without their consent, a woman groped on public transport or a Brazilian community whose land has been taken from them by a corporation, is a deep sense of humiliation.

For many, democracy has come to feel like a game of ‘choose your dictator’. The sense that you could change anything has grown weaker and weaker.

Globalisation is not about international trade (which has been widespread for 10,000 years before globalisation) but rather the globalisation of government. More and more decisions are made further from us with little or no consent.

For many, democracy has come to feel like a game of ‘choose your dictator’. The sense that you could change anything has grown weaker and weaker.

In my darker moments I am fearful for us. I grew up in the peace movement, firmly believing that every act of violence and conflict simply creates the next one. I also grew up in west central Scotland, where as a young man being in a weekend street brawl was not an unusual occurrence.

I’ve been fighting this internal fight my whole life. Sometimes I think I’m winning. Then I take a walk in the garden to have a wee think about writing a column on public anger, stand on a rake and feel a persecuted rage – WHO LEFT THAT THERE? (It was, of course, me.)

But I’m better than I was, and I hope to be better next year than this. I read a fair bit about about neuroplasticity (the evidence that we can actually rewire our brains if we try). I cling to the hope that I’m slowly winning the battle to be a better person, and the knowledge that it is at least theoretically possible.

I also believe there are collective responses. We teach ‘conflict’ in schools all the time (people are constantly being measured and weighed and evaluated and the winner gets the better life). We teach very little empathy, anger management or conflict resolution. If we don’t value and teach these things, then we can’t expect people to find them all by themselves.

The reason I think it is a crucial part of our future isn’t because I think giving more power to more people will change power – it’s that I think power will change the people. Angry reaction is very different from considered decision. It’s the difference between humiliation and respect.

I need to believe that there can be a time when no parent has fear at the back of their mind when their kid goes for a night out with their friends to a pop concert, but that time will not be ushered in by armed soldiers in the street. And those of us in the (comparatively) affluent world of white westerners cannot expect to have security all to ourselves.

The neoliberal individualists were wrong. It is not enough to ‘follow your dreams’. What you ‘feel’ may not be good. The pursuit of every whim and emotion is a path leading only to a wasteland.

The neoliberal individualists were wrong. It is not enough to ‘follow your dreams’. What you ‘feel’ may not be good. The pursuit of every whim and emotion is a path leading only to a wasteland. As humans, we must admit what we are – and what we’re not.

Then we must learn NOT to accept ourselves as we are but to fight ourselves to be better, kinder, more patient, less angry. When it gets dark, Ernest Hemmingway’s words revive me.

It is a wonderful world and worth the fighting for. But with hope, not guns.