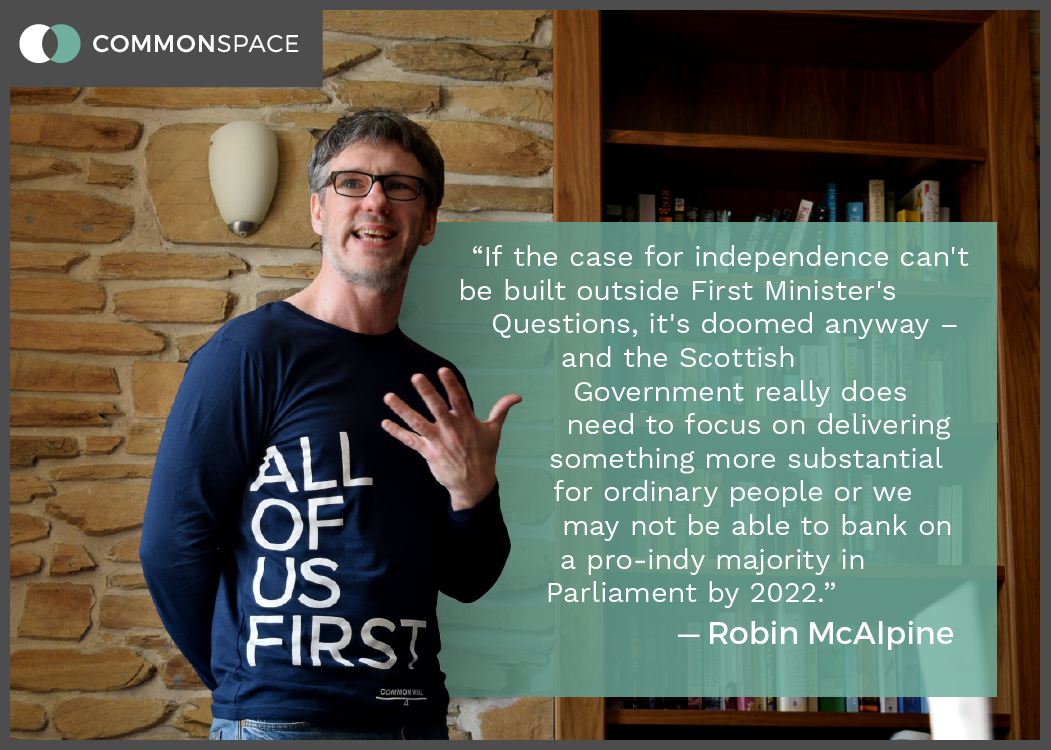 An interesting wee ‘mini-schism’ seemed to open up in unionist Scotland this week.

Since lazy stereotyping of the views of opponents is standard practice in Scottish politics, I’ll call them the fundamentalists and the instrumentalists.

The instrumentalist unionists see the constitutional debate as a kind of Swiss Army Knife – a one-stop tool for all your political problems. Want to equate your opponents to fascists? The union!

This annoys the fundamentalists. They don’t want the union for political benefit, to gain party political advantage or to win elections. They just want the union. A lot. And they think the best way to get the union is to stop talking about the Scottish constitution altogether.

There are some clear signs that the ‘Golden Age of Ruth’ is finally coming to an end. Trump-like, it’s her silences about the unpleasantness of those in her proximity that may speak most.

The first signs of this schism occurred in the pages of the Scotsman this week. Tory MSP Murdo Fraser had earlier put out a media release demanding that Nicola Sturgeon reveal the content of the Growth Commission report that she has on her desk.

The Scotsman disagreed. They called this ‘double standards’ and put it simply and honestly – “To stop independence dominating the agenda, opposition parties have to play their part too”. Which is to say they should shut up and stay shutted-up until everyone forgets about the independence thing completely.

Now, this schism isn’t enormous. I don’t think the Scotsman is indicating any intention to reduce its efforts to encourage the election of a Tory Government in Scotland within a Tory-run Britain. And goodness knows that few people believe more fundamentally in the merits of the UK than Murdo ‘Queen’s Eleven‘ Fraser.

But then the divisions between the so-called ‘fundamentalist’ and ‘gradualist’ independence supporters was never as stark as portrayed by commentators either.

There is lots of interest to look for hidden meaning within this minor stooshie. One of the most interesting is that there are some clear signs that the ‘Golden Age of Ruth’ is finally coming to an end. Trump-like, it’s her silences about the unpleasantness of those in her proximity that may speak most.

While the unionists’ post-referendum strategy hasn’t been shifting the polling on support for independence, it is fair to say that it has won the public narrative war, and fairly comprehensively.

I thought rampaging thugs with white supremacist views in George Square immediately after the referendum might have been a bit of a ‘Charlottesville’ moment for someone who had been so pious in attacking lesser actions from ‘cybernats’ during the campaign. But the media gave her a free pass.

So at least now the media is starting to hold her to account for some genuinely shocking comments being made by her own elected politicians. And I really doubt that Ruth’s ‘if there’s glory I’m in a studio, if there’s trouble I’m in hiding’ can be sustained much longer. Leadership abilities are only really tested in adversary and the Scottish Tory leader doesn’t seem to have handled setbacks with competence never mind sure-footed aplomb.

Another interesting point is that I’m perfectly aware that the more erudite and thoughtful unionist commentators and fellow-travellers have been uncomfortable with the intellectual contortions necessary to believe that saying ‘stop talking about independence’ every five minutes for three years is an internally coherent position.

But while the unionists’ post-referendum strategy hasn’t been shifting the polling on support for independence (the trend is slightly in the other direction and I know that this greatly concerns their strategists), it is fair to say that it has won the public narrative war, and fairly comprehensively.

So probably the biggest implication of ‘shut-it-gate’ is for the indy movement – because it too is split on the issue. The SNP leadership seems now to be tending towards the Scotsman position that everyone needs a time-out.

This thinking diverges significantly from the grassroots whose collective adrenalin is flowing, having been told to prepare for immediate battle only to be told to stand down again shortly afterwards.

This thinking diverges significantly from the grassroots whose collective adrenalin is flowing, having been told to prepare for immediate battle only to be told to stand down again shortly afterwards.

(And in this context, Nicola Sturgeon going all Gerald Ratner on the SNP’s name is self-indulgent and unhelpful. I spent Saturday with a group of SNP grassroots stalwarts I’ve known since they were babysitting me and, already somewhat demoralised, they were pretty offended by this.)

I understand both the arguments – ‘are we just going to ignore the clear evidence of voter fatigue?’ versus ‘how do we win if we don’t fight?’.

One side says ‘we need to stay silent for a year or two and then when Brexit becomes a disaster we can simply rerun the campaign of summer/autumn 2016’.

The problem with that is that after two years of silence, if Brexit doesn’t become the ‘magic fix’ then all momentum will be gone and it may be hard to get moving again. If independence just becomes Wings/CommonSpace/Bella/marches/village halls, it will completely disappear for most voters.

The problem for the unionists is that they have shown every sign of absolutely needing the constitutional debate, because without it the Scottish Tories and Scottish Labour have to stand on their own merits.

Plus, it means the entire focus will be on the domestic agenda and, with the best will in the world, I’m not sure that – as it stands – that’s a good thing.

The other side thinks we’re at the ‘just one more heave’ stage, that we simply can’t give up now.

The problem is that the direction in which we’ve been heaving hasn’t really worked and it has left the Scottish Government wide open to the ‘what about the day job’ jibes. It genuinely wouldn’t be clever to pay no heed at all to the strong evidence of voter fatigue.

This may sound a bit ‘rock and a hard place’, but actually I think it can be resolved effectively and that perhaps the unionists may have a bigger problem with this than we do.

The problem for the unionists is that they have shown every sign of absolutely needing the constitutional debate, because without it the Scottish Tories and Scottish Labour have to stand on their own merits. Now that’s a rock and a hard place.

Politics is essential to make things happen – like getting referendum bills passed and so on. But softening up is better done by others.

Politics is essential to make things happen – like getting referendum bills passed and so on. But softening up is better done by others – think Taypayers Alliance or UK Uncut or the peace, human rights or environmental movements or the fundraising campaigns of big charities or the PR campaigns of big corporations or what ‘clictivism’ groups like 38 Degrees have achieved.

None of these kinds of campaigns achieve political victories alone – but none would get there if they just waited for government. The independence movement has much to do before this is a parliamentary matter again.

So, in the characteristic garbled phrasing of Jedi Master Yoda “Do, or do not. There is no try.” Right now the Scottish Government can’t deliver independence or an independence referendum, so probably it shouldn’t try.

But ‘going dark’ would be a mistake from which we might never recover. Momentum is a fickle thing (only figuratively – not in physics I hasten to add); once it’s gone, it’s gone and you can’t know when it will come back.

If the case for independence can’t be built outside First Minister’s Questions, it’s doomed anyway – and the Scottish Government really does need to focus on delivering something more substantial for ordinary people or we may not be able to bank on a pro-indy majority in Parliament by 2022.

Any way I look at this, it comes out the same; the Scottish Government has to be a better government and the independence movement has to be a much more effective social campaign. Everything else feels unnecessarily, nerve-shreddingly risky.

Which leaves us with only one question – apart from ‘the union’, what are the Scottish Tories for again? Traditionally, racism, anti-catholic bias and the victimisation of travelling communities hasn’t been a sufficient answer for Scottish voters.