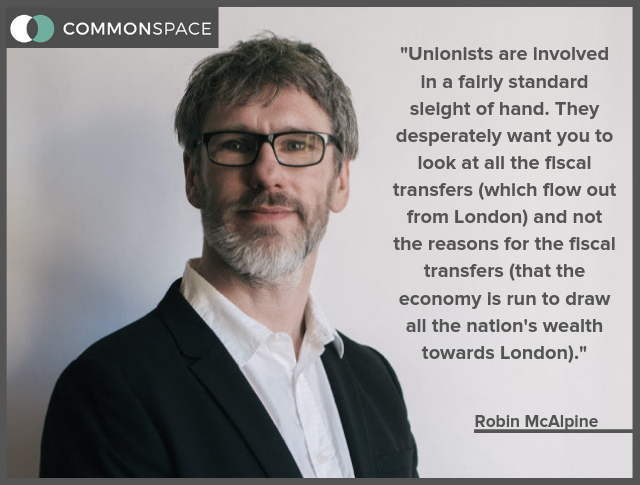 LET me begin with a pretty robust statement; the UK is the most economically centralised country in Europe and most serious economists think London’s dominance is now a problem, causing economic drag for the rest of the country (costing the UK £4.5 trillion, according to one study).

Then let me follow up with a pretty simple question – why is it OK for leading economists to say this, for regions all over the UK to say this, even for more enlightened commentators in London to say this, but if a Scot says it we’re accused of grievance and barely-concealed anti-English sentiment?

This question has been on my mind for a while. I read a fair bit of UK economic commentary and the debate about the dominance of the London economy has been a subject of increasing concern for many commentators pretty well since the financial crisis.

But this week the question is acutely in my mind – when a group of newspapers in the North of England launched a joint campaign this week called ‘Power Up The North’. It calls for nothing less than a ‘revolution’ in how northern England is treated.

It’s launch received sympathetic reactions from serious thinkers. They know that the North of England has a stone-wall case.

Let’s look at some stats. Austerity has cut public spending in the north by £6.3 billion compared to a cut of only £1.1 billion in London. The south-east and south-west actually saw a £3.2 billion rise in public spending.

London’s economy has grown well over 50 per cent faster than that of the North in recent decades. It is one of only two UK regions which have actually achieved average growth in the last 20 years (with the south-east squeaking in above average).

Public spending on transport is not only much higher in London but continues to rise at twice the rate.The average number of jobs accessible within an hour by rail for people in the north-west was estimated to be 187,000, compared to 1.7 million for those in London.

But perhaps the most startling figure is on arts spending. Each Londoner gets the equivalent of £69 spent on the arts; a lowly northerner gets the princely sum of £4.50 spent on their cultural offering. Because arts are for the capital – the north just needs Greggs, right?

I’ve had the chance to spend time with activists in the North of England in recent years and it has been eye-opening. My only real question is why they lived with the contemptuous treatment they did for so long? If the North of England marches on London, I’m joining them.

Of course, if ‘Scotland’ had been substituted for ‘the North of England’ in any of the above paragraphs, Scotland’s unionists would be all over me like a rash. It would be proof that I am a barely-concealed racist who can’t stand the English.

READ MORE: Death of a “gimmick”: Hopes of ‘Northern Powerhouse’ fade as Tories scale back spending

And they would also point out that Scotland doesn’t suffer as much as the North of England. That’s true; we do quite a bit better on public funding because we have devolution. I will never believe it was anything other than a mistake for northerners not to have grasped the John Prescott offer of Northern Assemblies, underpowered and under-resourced as they would have been.

But the fundamental point is the same; London sucks up the UK’s wealth. The official source of European statistics is Eurostat, a Directorate-General of the European Commission. It collects data on economic concentration in European countries.

Inevitably, in every case the capital city absorbs more than its per capita share of the nation’s wealth. In fact the average per capita wealth of European capital cities is about 200 per cent of the national average, with most counties clustering just either side of this number.

Not Britain; our capital city absorbs a cool 500 per cent of the national average. For each pound of wealth shared between the rest of us, a Londoner gets £5.

Very simply the Thatcher revolution was all about moving away from industries which were involved in manufacturing (which, by coincidence, happened to be the ones which were highly unionised) and towards a banking- and service sector-dominated economy.

Thus growth in the UK has been designed to this end; it’s all driven by financial services, monopoly corporations and asset value inflation (things like property and shareholdings). If your economy relies on property speculation, banking, stock market gambling and corporate headquartering, you’re singing.

On the other hand, the things that benefit these business sectors actively suppress other more productive industries like food production, manufacturing and local supply chains. Money is managed to be short term (good for speculation) not long term (needed for investment).

So let’s take a little guess where the corporate headquarters, banking jobs, most valuable property portfolios and the stock market are? Yup – London.

And take a guess at who has the land, the agriculture, the primary aggregates, the renewable energy, the tradition of manufacturing and the need for local supply chains? Yup, that’s ‘not London’, certainly including the North of England and certainly including Scotland.

There simply isn’t space here to explain how widespread this problem is. We have an energy grid designed for single-site generation to feed incredibly dense population centres in the South of England. So now we have to subsidise incredibly expensive English nuclear generation at the direct expense of Scottish renewable generation.

Or transport – the UK still runs north to south and not east to west, because it is all designed to transfer goods and people to London, not across the rest of the country.

Or immigration, always driven by the concerns of a densely-populated South East, never by the market conditions in Scotland, Wales, the North of England or Northern Ireland.

“Everyone serious knows Scotland is underperforming economically and, while the prescriptions for what to do about it may vary, the underlying analysis of why is straightforward.”

It is time we threw the challenge back. Unless they really are receding into a universe of alternative facts, the vast majority of the powers over the economy are reserved. Scotland’s economy is London’s day job – and they’re making an arse of it.

If unionists want to be taken seriously they have to take the chip off their shoulders about the fact that the SNP is the dominant political force in Scotland. They have to get past the continual grievance that 45 per cent of the population won’t just give up on their principles. They need to focus on their day job.

And a major part of that day job is (or should be) answering for the impact of the UK’s economic policies on the Scottish economy. Everyone serious knows Scotland is underperforming economically and, while the prescriptions for what to do about it may vary, the underlying analysis of why is straightforward.

The UK is not an even playing field. It’s economy (and much else) is rigged in favour of London. Everyone else performs predictably poorly by comparison. This is a simple fact.

Supporters of independence have a solution to that problem. How long will unionists be allowed to hide behind denial? Failing accurately to predict future oil prices may be a failing on our side; the UK economy is entirely a failure of their making.