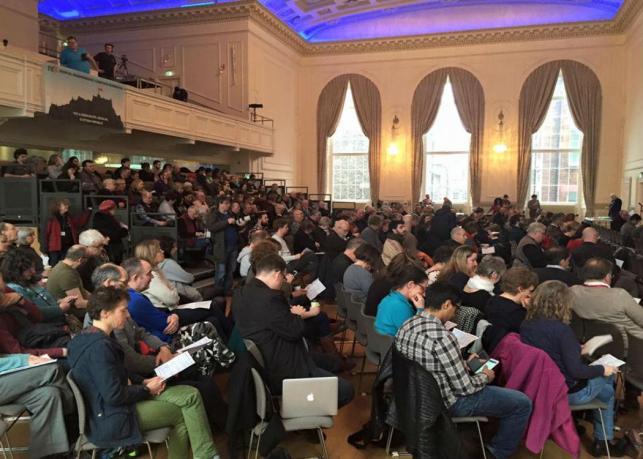 I PREDICT that in the coming months what we’re going to observe is a protracted case study of why a nation must be something more than an argument between political parties about who gets to run a set of government agencies (in close cooperation with a series of multinational corporations).

I think we’re going to see once again that the big, enriching stories about who we are as a collection of people in a particular place, and of what we can do and what we can become, has always been poorly served by party politics.

The departure of Kezia Dugdale is one more reason to think we’re heading into a turbulent autumn.

And if you’re not overly bored of me repeating it, it will confirm that the campaign for Scottish independence can’t be allowed to rise and fall, appear and disappear, day by day, on the basis of the ups and downs in the fortunes and interests of one political party.

The departure of Kezia Dugdale is one more reason to think we’re heading into a turbulent autumn. Who knows what is going to play out inside Scottish Labour. There is a lot of assumption that this will mark a sharp left-turn towards Corbyn in Scotland.

It may well happen – the traditional Labour left is very clearly on manoeuvres in a way we’ve not seen in decades. But the party membership was, up until very recently, seen as being strongly in the ‘moderate’ camp. Has there been a sufficiently big influx of new blood?

And can they find an attractive candidate? Of the contenders still in the ring, I can’t see an obvious strong leader with both the right agenda and the charisma which modern politics unfortunately demands.

In Labour’s recent successions, bloodbaths have left seething resentment and dysfunction everywhere while compromises have produced little but mediocrity.

On a national investment bank, an industrial policy and on open government (and possibly local democracy and land reform), the SNP may have ceded the chance to be first to colonise the space.

But can we assume this will happen this time? There are likely to be at least some difficult outcomes for the SNP. On a national investment bank, an industrial policy and on open government (and possibly local democracy and land reform), the SNP may have ceded the chance to be first to colonise the space.

Despite regular votes at party conferences on all of these things, the Scottish Government has simply resisted adopting these kinds of big ideas.

Well, if you don’t want it, someone else will. These may all become Labour Party issues, opportunities many voters may come to believe they have to vote Labour to achieve.

And there is also a genuine chance Labour could end up with a popular leader. It’s not obvious to me who it is, but sometimes people don’t look like leaders until they become leaders – back in the day I wouldn’t have put my money on Ruth Davidson becoming the darling of London’s liberal Tories.

Meanwhile, the SNP does not have its troubles to seek. Internal tensions have been rising for quite a long time now and after the poor local and general election campaigns they’re bubbling up all over the place.

If you don’t want it, someone else will. These may all become Labour Party issues, opportunities many voters may come to believe they have to vote Labour to achieve.

Most of you will have heard critical comments from party figures on how the Scottish Government has performed. You may not have heard as many criticisms about how the party and its administration has performed, but they’re now widespread.

There are still enough people putting on a brave face, but it’s getting harder. If one more person sheepishly says ‘baby boxes’ to me like they’re the revolutionary brain child of Nye Bevan, Mahatma Gandhi and Che Guevara, I think I’ll greet.

I can envisage scenarios with good outcomes, but none which are going to be pain-free as they play out.

Meanwhile, as I wrote last week, the Scottish Tories are giving every appearance of having left their honeymoon period well behind. I think there’s a good chance that 2017 is already ‘peak Tory’. Hell, this is a party that’s getting outpaced on ethics and urgency by the Scottish Football Association.

Since 2014, in their different ways, Labour, the SNP and the Tories have all tried to present themselves as something much more than ‘just a party’.

I have an enormous amount of respect for people who believe in something enough to join a political party and put up with everything that entails.

For a while the SNP leadership talked as if it was not just a party but an entire movement, laying claim to the efforts of many campaigners who weren’t party members and some who weren’t even supporters.

Party loyalists on social media constantly implied that any part of the movement that sought to behave autonomously of the SNP leadership was to be suspected or outright reviled. It was a Louis XIV attitude – L’mouvement c’est moi!

Very obviously, the Tories want you to believe they’re the sole custodians of Scottish unionism, the last guardians of the British state.

And Labour has always believed that left wing and socially progressive policy and campaigns are its child and its child alone. It was outraged that the independence movement had the cheek to challenge its parentage.

Since the referendum it has taken it for granted that the Scottish Government can’t be seriously committed to social change because, well, it’s not Labour. I wish more had been done to prove them wrong.

Parties stand on a collective promise (their manifesto) and it gives citizens both the ability to judge and the ability to reward or punish accordingly.

Of course, none of this is true. Labour didn’t stop believing it was the only true believer in social justice even when it was invading Iraq and privatising everything that didn’t move fast enough. Talk to a hundred social campaigners and ask them if Labour has been more enabler or more blockage on the way and see what they tell you.

There are loads of people in Scotland firmly committed to holding the UK together who don’t believe the victims of rape should have to fill in a form to get their benefits. Unionism is not Toryism.

And while the SNP could genuinely have been described as a movement in the 1960s and 1970s, by the dawn of the Scottish Parliament it made substantial play of the fact it had left those days behind and was now a professional political party. It can try to pull the old costume on to impose hegemony, but it doesn’t fit very well any more.

Now before it sounds like I’m suddenly against representative democracy, I’m not. I have an enormous amount of respect for people who believe in something enough to join a political party and put up with everything that entails.

I believe they’re fundamental to democracy – holding a plethora of independent politicians to account for their actions is nearly impossible. Parties stand on a collective promise (their manifesto) and it gives citizens both the ability to judge and the ability to reward or punish accordingly.

But they can be disappointing, grubby things as well – the public’s disillusionment with political parties is hardly entirely unmerited.

But they can be disappointing, grubby things as well – the public’s disillusionment with political parties is hardly entirely unmerited. The political party that doesn’t try to stifle external criticism doesn’t exist. ‘Hide a problem’ is almost always the preferred route; you only fix problems in emergencies.

And the more the public has become disillusioned with party politics, the more the parties have tried to present themselves as something more than ‘just a political party’. From Angela Merkel’s ‘mother of the nation’ routine to Donald Trump’s ‘making America great again’ delusions, they’re amalgamations of messiahs, magicians and village elders.

Except they’re not. They’re political parties. They virtually never come up with good ideas (Ronald Reagan didn’t invent Reaganomics, Margaret Thatcher didn’t invent Thatcherism). They never admit to imperfection. They inevitably see protecting their own jobs as a priority. Because these are human institutions.

We need them, but we need a lot more than them. We need ideas. We need ambition. We need vision. We need scrutiny. We need scepticism and doubt. We need challenges and disagreements. We need plurality and difference. We don’t get these things from political parties.

Unfortunately, in Scotland we don’t get much of them at all. The many, many great campaigns and NGOs and think tanks and representative organisations and public thinkers we have are generally invisible to the public.

This is because our media has become so under-funded that there’s almost no-one there to build bridges between these worlds, the public world and the intellectual world.

And the media is barely even able to fulfil its primary role of holding to account. I’ve started to think that the safest place to commit a murder in Scotland would be in a parliamentary committee; the police would really struggle to find witnesses.

I fear that we may be entering a period of paralysis in Scotland. An almost constant stream of elections and campaigning has been underway, virtually since 2011. This is the first time there is a four-year period without a looming election.

I don’t think it’s any surprise that this is therefore the moment when all the internal tensions which have been building up over that time are starting to release themselves. In war we fight together; in peacetime we bicker and fall out.

In the following months as Labour enters civil war, the Tories jump the shark and years of internal resentments in the SNP bubble over, I doubt we’re going to see much progress towards the kind of Scotland either side promised during the referendum.

A temporary reprieve from the incessant eye-poking that is Scottish politics might be a good thing.

This could simply engender despair. Or it could push us to stop expecting all the answers to come from political parties. Because they won’t.

If we do enter a period of introspection by the political parties, those not caught up in it have a responsibility to shine a light on the way ahead. A temporary reprieve from the incessant eye-poking that is Scottish politics might be a good thing.

So step forward public intellectuals, big thinkers, hoarders of good ideas. Step up and and let’s hear from you. You’re very much going to be needed.