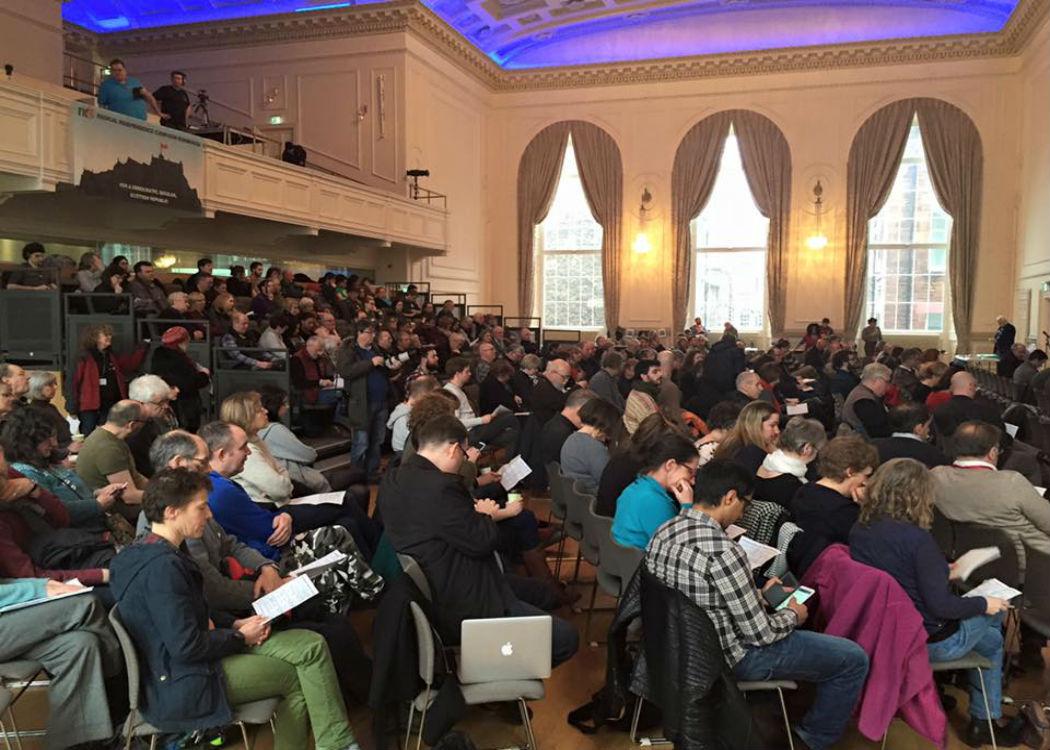 Leftists call for campaign for independence by 2021

ROBIN MCALPINE has announced that he is in talks with pro-independence groups to reconvene the Yes movement.

Speaking at the opening rally of the 2016 Radical Independence Conference the director of the Common Weal think tank said that a new organisational structure was already being designed and “serious funding” sought.

The new outfit would involve figures from the independence convention, women for independence and the Radical Independence campaign among many others in a “stakeholder” structure with full-time officers, McAlpine told the conference.

“We cannot wait for external events to converge on us and ‘trigger’ a second independence referendum. We must decide to call a second referendum ourselves.” Robin McAlpine

Speaking to the fourth national conference of Ric, held in the Assembly Rooms in Edinburgh, McAlpine said: “I don’t want to say too much, but we have been in talks to bring the Yes campaign back together.”

“We cannot wait for external events to converge on us and ‘trigger’ a second independence referendum. We must decide to call a second referendum ourselves.”

“We should call a second referendum once Yes is consistently polling at 60 percent or above.”

McAlpine said that a worsening political and economic situation in Europe meant that any referendum after 2021 may be too late, and that parties should be entering the 2016 Scottish Elections with another referendum in their manifestos.

In August 2014 CommonSpace revealed that there was no discussion on either the 2014 Scottish independence referendum or a future referendum slated for the SNP’s September 2015 conference.

In January 2016 First Minister Nicola Sturgeon confirmed that there would be no second referendum in the SNP’s manifesto for the 2016 Scottish Elections. The SNP leader has said that there were a number of material circumstances which could ‘trigger’ a second independence referendum, chief among them a UK exit from the EU when a majority of Scots voted to remain in a forthcoming referendum.

“The yes movement has to get itself back together again. We have to campaign from now until a second referendum to firm people up in their support for independence.

“Between 1992 and 2013 the SNP did not campaign for independence, the result being that at the start of the campaign support for independence was around 29 per cent. This time we are starting from 45 per cent,” he said.

“We need a new organisational centre. In needs to be a seven days a week organisation with employees. It needs to have intellectual rigor.” Jim Sillars

Speaking in a session of the conference dealing with strategies for achieving independence, Sillars endorsed the plan to relaunch the independence campaign.

“We need a new organisational centre. In needs to be a seven days a week organisation with employees. It needs to have intellectual rigor,” he said.

Sillars said that the new vehicle would be necessary to make up for the intellectual unpreparedness of the Yes campaign on matters including Scotland’s currency and the economic value of Scotland’s oil.
He said: “Independence requires a hard choice. Soft [on independence] people don’t make hard choices.”

He also reiterated his support for the Rise electoral alliance : “They are saying unambiguously, we need a second referendum. That’s one of the main reasons I’ll be voting for Rise,” he said.