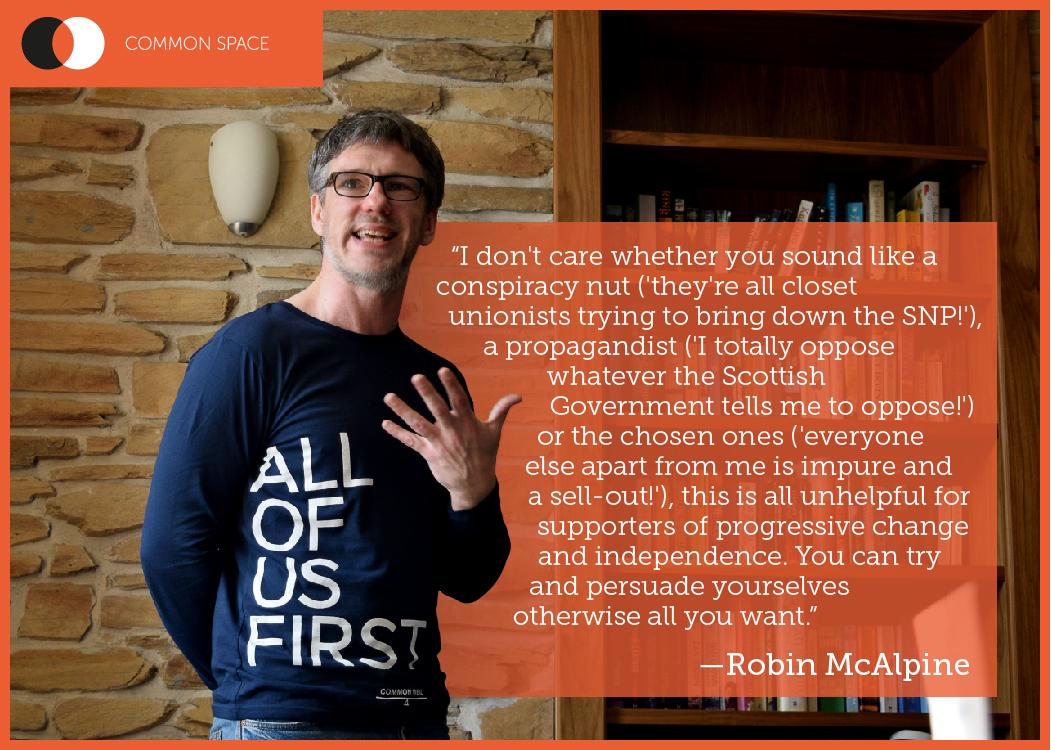 I WONDER if progressive, independence-supporting people might indulge me for a couple of minutes and pause to consider a couple of questions.

Second, have a glance back at the last couple of weeks. Have a look at some of what has been written. Think about how it is making various people from the first question feel. Think about what kind of motivating influence this will have on them.

In case you missed it (and I’ve been trying very hard to miss as much of it as I can), an intemperate war of words has been breaking out between a number of people.

Now finally, put these two questions together. Are all the behaviours we’ve been seeing in any way making it more likely that we will succeed in the tasks ahead? Are any of the behaviours helping anyone?

In case you missed it (and I’ve been trying very hard to miss as much of it as I can), an intemperate war of words has been breaking out between a number of people who have platforms which they have used to argue for or against the question of whether people should split their pro-indy vote in the upcoming election.

The polarising effect of this spat has pushed the various contributors into increasingly dogmatic positions. At the worst this sounds awfully like ‘anyone who doesn’t give both votes to the SNP is a traitor to independence’ versus ‘the SNP are sell-out Tories who must be brought down’.

Let me give you my answers to the initial question I posed. First, there is no chance of the SNP delivering independence on its own. It took a movement last time and it will take a movement next time. Count the numbers any way you want but the SNP has almost certainly passed it’s peak polling numbers and it certainly didn’t reach the 60 per cent plus in the polls it needs to win a solid mandate for independence.

First, there is no chance of the SNP delivering independence on its own. It took a movement last time and it will take a movement next time.

And since I doubt there are many of you who in your heart of hearts think that the next four or five years are going to make the SNP substantially more popular (something virtually unheard of during a third term of a government), surely you can see that the SNP absolutely needs other people to turn out parts of the electorate it can’t.

(And honestly, if you’re not aware that there are significant numbers of people in Scotland who can be won over to independence but are suspicious of the SNP, the bubble you are living in is proving unhealthy.)

Second, if supporters of the Greens and Rise think that they’re going to help create a more socially and environmentally progressive Scotland by electing a handful of MSPs to sit on the opposition benches and throw insults at the SNP, they may wish to take a breath and think that through for a second.

Because if everyone (including the membership of the SNP) can’t see that big business, establishment, rightwing Scotland is forming a loose coalition to coax and cajole the Scottish Government towards the neoliberal right, then I suggest you’re not looking.

We’ve got about one chance here and that is to form a strong, coherent progressive coalition to coax and cajole the SNP in the other direction. The big business lobby has made it impossible for the Scottish Government not to listen to its ridiculous demands. The progressives simply have not – and we’re being left behind.

Second, if supporters of the Greens and Rise think that they’re going to help create a more progressive Scotland by electing MSPs to sit on the opposition benches and throw insults at the SNP, they may wish to think that through for a second.

So we need positive, collegiate partnership between pro-independence, progressive political parties and beyond. But what have we got? Name calling. The right wing and the unionists must be laughing their socks off.

I know that some people are behaving as if the ‘two votes SNP’ is virtually totalitarianism. Sorry, I can’t agree. I have yet to see (anywhere, ever) a political party which has stood on a platform of ‘vote for someone else’. The Greens aren’t campaigning for Sandra White in Hillhead. ‘Vote for us’ is hardly the stuff of dictatorships.

But on the other hand, surely even the most dyed in the wool SNP loyalist can see that the SNP has been giving people on even the centre left every reason in the world to split their vote. The election pitch so far has been small-c conservative with a couple of uncomfortable nods towards big-C Conservative policies.

If some SNP members want to get angry, perhaps they might reserve a little bit of that anger for whoever decided that they were going to give more cash gifts to big business through the Air Passenger Duty cut than they were going to raise via a terribly modest increase in Council Tax.

We need positive, collegiate partnership between pro-independence, progressive parties and beyond. But what have we got? Name calling. The right wing and the unionists must be laughing their socks off.

And if your argument is that it’s the only way to get a second referendum, you might ask yourself whether appearing largely to rule out another referendum in the next parliament other than in fairly exceptional circumstances fits with that argument.

Don’t blame CommonSpace (as a couple of readers have) for reporting what the SNP is briefing. They are making it very clear that they are not promising another referendum in the next five years.

I’m not saying they’re wrong to do that (actually, I broadly think that’s right), but it does mean that you’re going to have to come up with a little bit more of an argument than saying ‘don’t criticise until some point in the distant future which we’re not going to tell you about’. If you’re not promising a referendum then you need to stand largely on your domestic agenda.

What I find most concerning (from some direct conversations) is the utter self-certainty that people on either side seem to have that this is all the fault of ‘the other guy’. I have sat in rooms and heard people defend what seems like utterly counterproductive language and behaviour from people on their own side while condemning virtually the same behaviour from the other side.

So sure, a small clique can run nasty, overblown and aggressive campaigns filled with over the top invective against a website they don’t like, but you can hardly be surprised if that website ends up lashing out in response. We’re all responsible for our actions and there are just a few too many people who are not being honest about the real implications of what they and their allies have said and done.

And the craziest thing about all this nonsense is that it’s doing not a bit of good. Do you think anyone is changing their mind on how to vote because of all the shouting? Outside of us, you think anyone cares?

Meanwhile, people who should simply know better are arguing that their job is to be loyal, unquestioningly loyal – no matter what. Dear god, when in all human history did that ever end well? Did you ever meet a Blairite?

If the SNP is criticised only from the anti-independence right, that is the direction in which it will be dragged. That’s just the reality of politics – like it or not people respond to criticism. If big business says ‘tax cuts for big business are brilliant’ and the rest of us keep quiet, what do you think happens?

One of the most useful pieces of advice anyone gave me when I started out in politics was the following: “friends come and go, enemies accumulate.” When someone does something nice for you, you form a nice impression of them but you struggle to remember why.

But when someone does something nasty to you, you will remember it with utter clarity, often until the grave. That’s why it is so important never to fall into the trap of believing that you can be totally shitty towards someone on the internal justification that they’ll forget. They won’t. It’ll gnaw away at them.

Like a drunk relative at a wedding, people do stupid things during elections and the best bet may simply be to avert your eyes.

And the craziest thing about all this nonsense is that it’s doing not a bit of good. Among those of us who are in these circles, you think anyone is changing their mind on how to vote because of all the shouting? Outside of us, you think anyone cares? They’re just pointless pixels changing nothing except our ability to work together.

I don’t care whether you sound like a conspiracy nut (‘they’re all closet unionists trying to bring down the SNP!’), a propagandist (‘I totally oppose whatever the Scottish Government tells me to oppose!’) or the chosen ones (‘everyone else apart from me is impure and a sell-out!’), this is all unhelpful for supporters of progressive change and independence. You can try and persuade yourselves otherwise all you want.

Three quick proposals. One, stop reading it for a few weeks. I have. I don’t want to read words which will make me feel less respect towards people I currently respect. Like a drunk relative at a wedding, people do stupid things during elections and the best bet may simply be to avert your eyes.

Two, try and spare at least 30 per cent of your rage for your own side. Unless you can be genuinely critical of yourself, you don’t have a reliable compass by which to navigate.

Three, if you’re feeling angry, ask yourself whether sharing it with the world is really a helpful thing to do. You can fool yourself into believing that you ‘really need to get it off your chest’. You almost certainly don’t, and anger is infectious.

I know you think you’re doing ‘the right thing’ or ‘what needs to be done’. I appreciate your good intentions. Now, take a step back. The election will be over soon. What then?

It’ll be a cold day in hell before I tell anyone how to vote in a multi-party election. My advice is to go out and vote for what you believe in. You cannot calculate the future, you cannot know what others are going to do. The only person you can hold accountable is yourself.

As for the rest of it; I know you think you’re doing ‘the right thing’ or ‘what needs to be done’. I appreciate your good intentions. Now, take a step back. The election will be over soon. What then?

There is a much longer battle to be fought than this sort-term brawl. For the sake of that battle, pull in your claws.