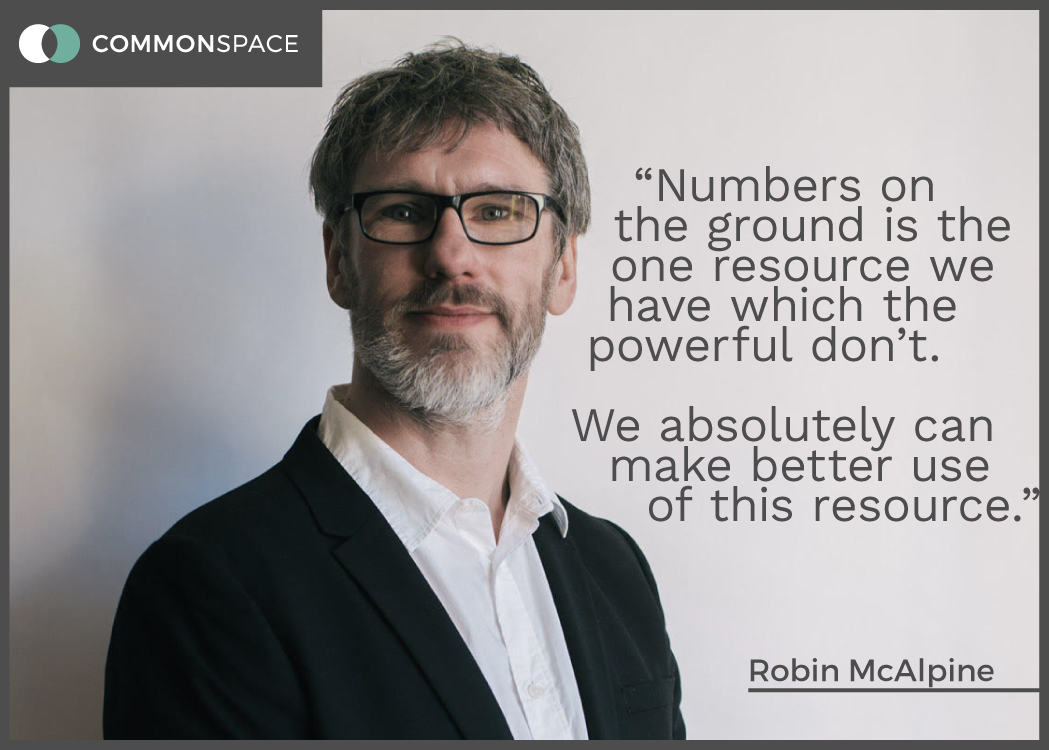 Common Weal director Robin McAlpine argues that new tech has not brought shortcuts to change – we still need to communicate with those who don’t agree with us, tell stories that are convincing and organise ourselves effectively

I read this article on CommonSpace by John Rogers with interest yesterday. In it he argues that the campaigning sector in Scotland is too fragmented and too inward focused.

I’m definitely inclined to sympathy with his view – but I’d also add that I worry that frustration has led to us looking for shortcuts, easy ways out, single ‘magic bullets’ which we hope will do the job. I think we need to remind ourselves that genuine shortcuts are rare, and that people who win usually start by accepting the world as it is. They try to change it; they don’t wait for a time when its ready to change itself.

There is so much happening just now that is making me think about this – debates about the old media, revelations about social media, evidence on ‘new media’, big changes to data and communication laws.

Because outside face-to-face contact, these are still the main routes for communicating ideas and arguments to the wider population.

Let’s take data changes. David Cameron’s government managed to turn a bill which was supposed to be about political lobbying into legislation to crack down on trade unions and political activists and limit what they can do.

Coming from the opposite direction, the EU General Data Protection Regulations are a serious attempt to stop the commercial abuse of our data. But of course the implications of the rules don’t just hit corporations.

Common Weal has approaching 20,000 people on our main mailing list – but we now need to get everyone to re-subscribe because of the new rules. We’re running at about 20 per cent re-subscription, which is a comparatively impressive rate.

But it took years to build up that reach and we risk losing much of it (so do please sign up folks). Many others are in exactly the same position.

I’ve also been looking at social media reach with the team. Again, our headline numbers may be good, but if you add them up our ideas certainly aren’t making their way into the newsfeeds of the majority of the Scottish population.

I am writing this on a new media platform that Common Weal set up precisely to try and make a space for the news that doesn’t get reported elsewhere. Once again, we get great readership numbers, but the proportion of those who are not already engaged in some way is probably small.

So we cast our eyes back to the old media – but what we see there is hardly a complete picture of Scotland. Just to use Common Weal as an example again, outside The National and to some extent the Sunday Herald, we can’t get coverage of our ideas anywhere. (For god’s sake people, subscribe to the National and keep it safe.)

In some ways this has actually been a good discipline for us. In think tank world it is very easy to launch a report, get media coverage, hold a drinks reception in parliament and then pat yourself on the back for a job well done.

We can’t afford drinks receptions and don’t get in the media, so we’ve had to take different routes to getting things done. And it’s having an effect – I’m hopeful both our National Investment Bank and National Infrastructure Company ideas will now see the light of day.

But let’s not kid ourselves; we worked very, very hard for a couple of potential wins. But have a glance at the other side. The people who own and run grouse moors seem never to fail to get what they want. Want to exterminate ravens without any scientific evidence of the impacts? Sure, go ahead. Likewise, how many of the items on the wish list of the volume housebuilding industry haven’t been met, for example this or this?

We thought that social media might change things. We were naïve, because we thought that the rich and the powerful would just let us have it. Instead, as the Cambridge Analytica scandal has shown us, the rich simply bought up the power of social media.

You can debate the impact and you can debate motives, but if you list the groups who seem to have benefited from the collision of social media and politics there are many more Trumps and Brexits than there are Scottish indy movements.

Likewise, we’ve called the old media liars quite a lot. And yes, you don’t need to tell me about bias and propaganda (always the thing ‘the other side’ does) because I’ve worked with the Scottish media my whole life.

But if you think this has had any useful impact you should probably ready yourself for disappointment. When we did the public attitude research work with the Scottish Independence Convention, there was one absolutely consistent factor.

It didn’t matter if people were Yes, No, undecided, had changed their mind since 2014 or hadn’t – all of them not only could but spontaneously did recite back to us unionist catchphrases like ‘now’s not the time’ or ‘referendums are divisive’.

And yet not a single person could name a single pro-indy catchphrase which had been generated since 2014. We can blame the media all we want, but can you name me such a catchphrase? And it’s not that they didn’t see pro-independence people on the telly (mainly the First Minister), it’s that nothing was said that they could remember.

I fear the same is true for a lot of the other campaigns we work on. I fear that, across the board, we may have got so frustrated with the ‘old ways’ that we’ve convinced ourselves that Tweeting something is the same as achieving something. But are we moving opinion?

Today we learn that the cross-party No movement (through Scotland in Union) has raised nearly £700,000 since 2015 to campaign against independence. The cross-party Yes movement over the same time has had lengthy debates about what to do with tuppence ha’penny.

I’m afraid there are few shortcuts in life. Money buys capacity, capacity enables access to the public, access lets you change minds. ‘Make do and mend’ rarely beats money (you can replace money with dedication, organisation and a really good plan, but it’s much harder).

Likewise, the old media isn’t going away and it is still how our main target audiences get most of their information. Walking away and sticking up two fingers won’t change that and we’ve not come close to ‘replacing’ them yet.

So is it all doom and gloom? No, it is not. There are (I think) three big things we can do. First, we can learn from those who win – what do they do? How do they communicate? What are their strategies? Mostly they don’t spend their time calling other people names.

They don’t just do what they think is right, they spend money trying to find out what the people they want to influence think. They test if what they do is working.

Because what they really do well is tell stories. All effective influencers now focus on telling stories about people, their lives, their hopes. Advertisers do it, fundraisers do it, lobbyists do it. And there was a time when we did it really well in the indy movement. The story we told about Scotland’s future in 2014 was popular and had an impact. But we stopped telling it and started name-calling.

One of the other things I hear a lot now is that we’re making progress through face to face contact. This is always followed by an anecdote of how someone or other changed the mind of someone else.

This is the third thing we can do – we can learn to be much more effective at organising face to face contact. The problem with anecdotes is that they don’t move opinion polls or change legislation; they just make us feel better.

For example, the Bernie Sanders campaign didn’t amount to lots of anecdotes about how they were changing minds – they knew how many conversations were being had, what was being said, who it was being said to, what follow-up took place, who hadn’t been reached.

Numbers on the ground is the one resource we have which the powerful don’t. We absolutely can make much better use of this resource.

All of these and more we can win. We’ve just got to stop looking for shortcuts and we need never to allow ourselves to believe that the hard paths we need to take are necessarily the longer paths.

But we can’t do it until we accept the world as it is and we neither deny its reality nor believe we can somehow bypass it. New tech made lots of people (sometimes me included) believe that there were new and faster routes to our end goal.

In looking for that shortcut, do we not risk taking our eyes off the goal?