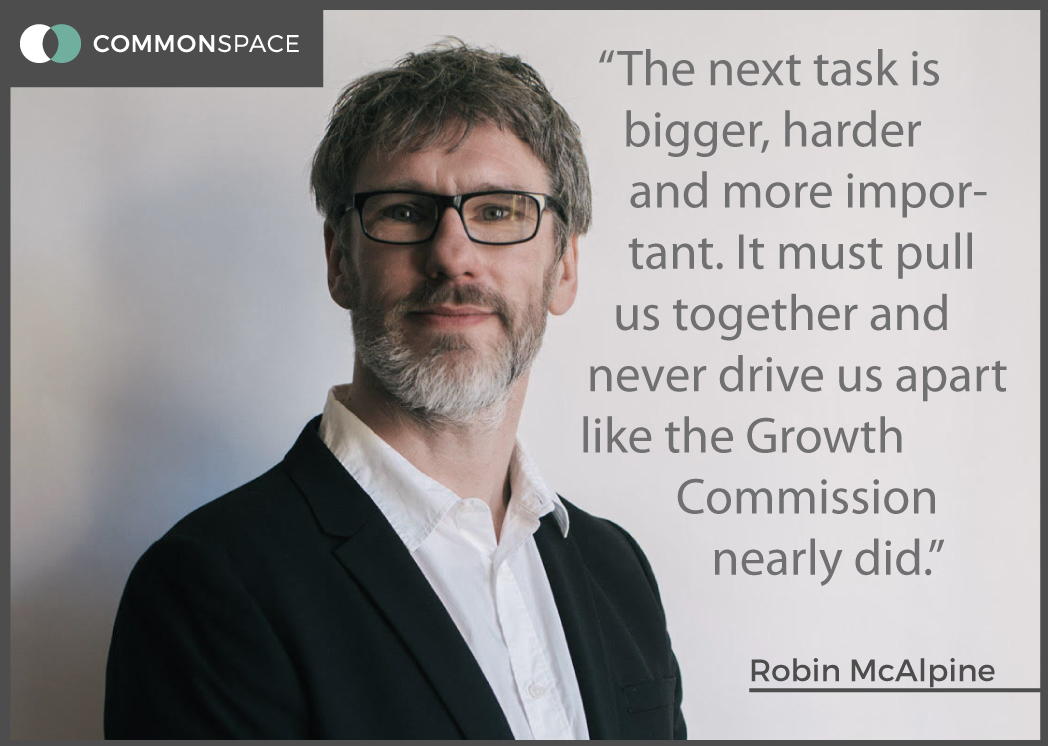 Common Weal director Robin McAlpine says the SNP’s National Assemblies show the party membership has already made their mind up – they want a Scottish currency. Now there’s an opportunity to build a new indy vision together

WELL THAT was a weird kind of a campaign.

We were seriously worried that the substantial resources behind the Growth Commission would be used to push the case for Sterlingisation.

And? It may have been a waste of time. We arranged teams to flyer the three SNP National Assemblies, but everyone going in took a briefing sheet and said ‘I’m for a currency’. Everyone. I don’t think we came across a ‘Sterlingiser’ at all.

(Nor was there any love for the Growth Commission’s economic framework or proposals on banking regulation, deficit reduction or tax reform, but one thing at a time…)

At some later date when this is all over we can ask how the hell this happened. How did we collectively end up with proposals almost literally no-one supports and why are they still on the table?

But for now the important thing is to move forward purposefully. Because over the last three weekends we’ve seen the absolute best of the SNP, and that must be the learning point from this whole affair.

If you were trying to glean what was going on from social media (as we were) you’d have seen the various flip-chart write-ups of the discussion. The Common Weal team discussed them by email and almost everything on the boards was policy we’ve campaigned for, have supported or about which we have published papers.

The debate was clearly diverse, full of ideas, bursting with enthusiasm and not short on vision. These are not things many people are saying about the Scottish Government just now. That Government would do well to draw much more from inside its own party.

It’s also hard not to feel that the party hierarchy might benefit from developing better connections with the kinds of organisations in Scotland which support what their party membership believes in and perhaps a bit less with the banking/NATO set.

But the immediate task is resolving the core questions about independence. And on that front you can argue that we’re further back, not further forward.

Why? Because this long after 2014 we should be at the stage of narrowing down the agenda, taking superfluous or unsupported ideas off the table. Instead there is more and more being put on the table.

The Assemblies appear to have been great; they were exactly what I was arguing the movement needed straight after 2014. But that’s the problem – they should have happened three years ago.

So what now? It’s a little tricky.

The easy bit is currency. I know, you know, everyone knows that the only solution on currency that has widespread support is a Scottish currency either immediately on independence or quickly thereafter.

The good news here is that the hard work has been done. Working with experts in their field, Common Weal has now published a suite of four papers explaining how to set up a currency, central bank and foreign currency reserve and on why not to be scared about speculative attack issues.

REPORT – How to make a currency: A practical guide

There are plenty of variations in some of the detail of how to get this done, but the basics are there and this must now become policy (the sooner the better).

So let’s get that out of the way quickly. Because, on the policy front, there are still two big areas where we need to settle on answers.

The first is, well, all the other stuff that needs to be done to become independent. I know there are those in the movement who think that less detail is better. I’m afraid those people don’t do many debates or go on TV often; refusing to answer questions or telling people it’ll be a nice surprise after they’ve voted is not going to work.

There are some nasty issues to deal with. One set of them (especially border issues) isn’t particularly difficult to solve, but it is difficult to explain. The other ‘problem set’ is in international relations where we can’t guarantee how other governments will behave, particularly during a campaign.

The good news is that Common Weal has put a lot of time into this as well, again talking to experts in their field to identify the best solutions. There’s nothing that can’t be answered, but as a movement we need to commit to some kind of answer (it’s all in the book…).

But there is a potentially more difficult policy debate, and that is about the fraught question of ‘what kind of Scotland we’re trying to create’.

Actually, Common Weal was going to kind of shove this into the background. We focussed on policy that needed to be completed (consensually) before independence and then assumed there would be more than one vision of the future.

If that had been the only future being offered it would have been a disaster. So Common Weal has been working on an alternative economic framework for some balance.

But even it is narrower and in some ways less ambitious than the content of the debate at the National Assemblies – which in itself is heavily at odds with the direction the SNP leadership has been signalling.

It is this which I amn’t sure how to solve. Make no mistake, if the SNP offers the agenda its members are discussing, I’m in. But I don’t think that’ll happen.

I expect a much more centrist fudge manufactured from odds and ends salvaged from the Growth Commission (which I fear will be kept alive in some way purely to save face) with things that sound a bit like the membership’s shopping list tacked on.

I just don’t know who is going to do this, who’s actually going to synthesise all this stuff. And I am concerned that you don’t get many third chances – and the Growth Commission was us wasting our first chance.

So whatever the solution is has to be really, really good. Suffice to say that that’s easier said than done.

As far as anyone can tell this all now falls under Keith Brown’s remit. He must be given genuine credit for making a real success of the National Assemblies which had the potential to be a catastrophe.

But the next task is bigger, harder and more important. It must pull us together and never drive us apart like the Growth Commission nearly did.

Now is the time for people to put their differences aside and work together to fix things so we’re ready to fight for real.

All I can say is that the currency campaigning phase is over. Common Weal has got its constructive hat on and is ready to do anything it can to help. Let’s get all this right this time.