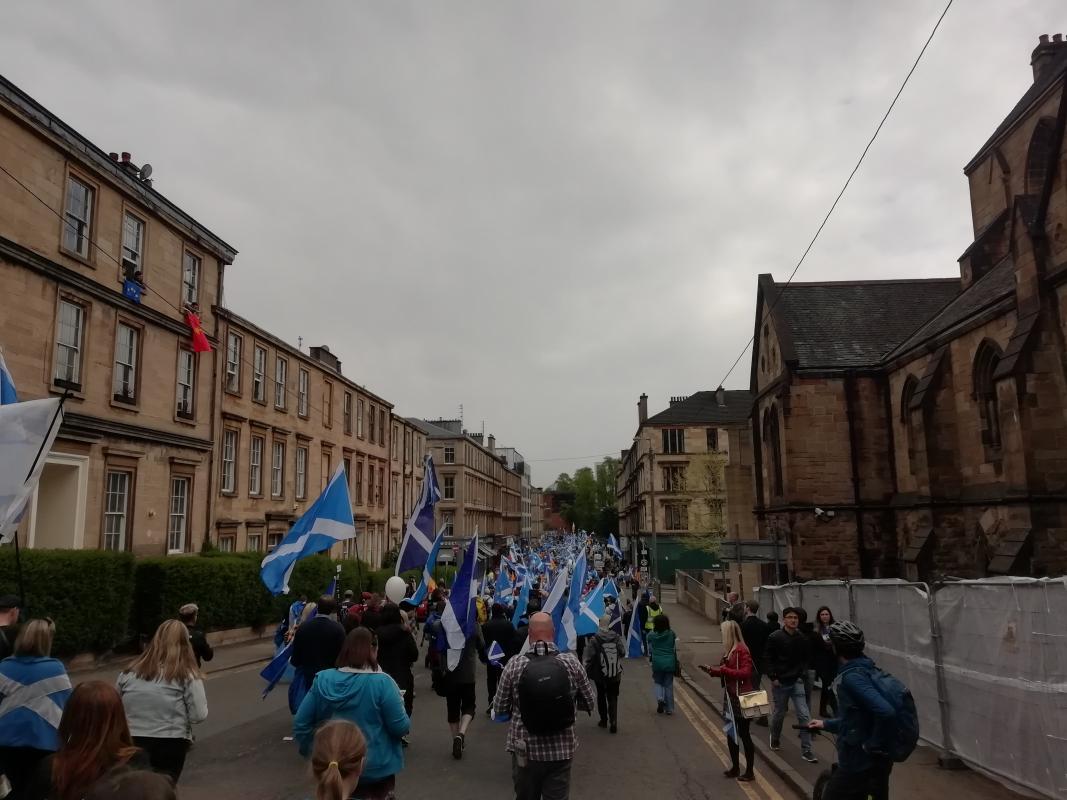 Common Weal director Robin McAlpine says the divisions among pro-independence advocates over the All Under One Banner march is the product of two very different worldviews: one of the centrist political establishment, and the other of the grassroots movement

I BELIEVE in the Scottish independence movement. I believe in it very much and will vigorously defend it. So I’m angry this week.

But I’m not sure what good more anger can do right now so I think we need to try to understand why some in the SNP leadership seem so ready so often to go out of their way to offend so many in the movement.

I highly commend what Stuart Campbell, Paul Kavanagh and Kevin McKenna have written on this. But I want to argue that there is a fundamental ideological problem which has led us here. To understand it without anger I want to tell the story twice; once each from both viewpoints. Since I am hardly neutral in this I will be honest and use ‘you’ and ‘we’.

First from one side.

You are a small group of people who run the SNP and its various parliamentary groupings. You believe in independence but you also believe in the political system. For a long time you have existed in a disciplined, professional, ‘grown up’ political environment. Your career has helped you to hear clearly the concerns of the many connected and influential people among whom you move.

“I want to argue that there is a fundamental ideological problem which has led us here.”

Sure, Tony Blair completely miscalled the Iraq War, but since no-one was better at wooing that centrist silent majority you’re feel there is no shame in modelling yourself on him.

So from the moment the independence referendum is over you do everything in your power to signal (both implicitly and in explicit briefings) that your political party is absolutely NOT the voice of a movement but a professional, moderate, centrist political party. You are the mainstream, like New Labour.

You will not answer for anyone not in your party and so you will make clear you have no links or associations with a wider movement. You must insulate yourself from what happened beneath you in 2014.

So you focus on the process of government and you wish to be seen as ‘statesmanlike’. You repeatedly disown the badge ‘nationalist’. You aspire to be admired by the political classes. And when Britain votes for Brexit the doors of the establishment are thrown open to you.

Suddenly you are sitting on sofas and sharing platforms with people who have a very strong narrative about the world. That narrative is surprisingly close to your own; the system must prevail.

And the system is under siege – from nationalists and populists. The divide is clear; you’re Clinton not Sanders (obviously not Trump), Macron not Melenchon, Watson not Momentum, Ummuna not Farage. Inevitably, the more you integrate yourself into the politics of anti-Brexit, the more you come to see yourself as being in a struggle against populism, against the unfocussed anger and resentment of the masses.

No matter how much you shape your party to these primary beliefs, events just keep running against you. Behind you, your previous leader keeps sounding like a populist and (unforgivably) he breaks the holy laws by appearing on RT (Russian, populist AND anti-rationalist propaganda). You try to stop him but your feud escalates in ways you can’t control.

Below you is just a mess; no matter how much you try calmly to explain to your party members that nationalism can’t win a referendum and flags and marching are exactly the kind of populism that lost you the 2014 referendum, still they persist. What can you do if your party simply won’t grow up and move on?

READ MORE: Bill Austin: Why the Growth Commission indy plan would be a missed opportunity to close the tax gap and raise billions

So you’re forced to manage your party, feed it just enough of the stuff that it likes to keep it off your back – but as little and as infrequently as possible and preferably away from the public gaze.

But no matter what you do, too many in the independence movement still talk in terms of disruption – from land or banking or tax reform to a different foreign policy outlook. If you can’t stop the revolution, you need a counter-revolution.

So you increasingly find yourself in the orbit of a man who also believes that the 2014 independence campaign was a dangerous wrong turn away from the current system. His manifesto is ‘substance not symbols’ – the primacy of the agendas of those who run the economy over those who march out of discontent and emotion; the establishment and never ‘the mob’.

So you get him to produce a ‘Growth Commission’. It’s whole purpose is to win back the independence narrative for ‘moderate centrism’, to cut off the flow of good will to the social reformers, to isolate them and to make clear that independence is only an argument for running the system better.

You find yourself reaching out more and more to the right wing of your party where most of the anti-populists can be found. You make common cause, you start to build an infrastructure for your counter-revolution – a rebuttal service to make Wings Over Scotland redundant, Progress Scotland to reclaim political narratives from Common Weal and so on.

You work very hard to bring the only pro-independence newspaper over onto your side. You always believed that accepting a cross-party campaign in 2014 was a mistake that you can’t afford to repeat so you ‘buy up’ the Yes brand and make it a campaigning sub-brand of your own political party. With this infrastructure you are a wholly-contained replacement for the movement and in complete control.

If this project works you need never compromise again. You will have defeated nationalism, populism and ‘the left’. You can now undermine the dangerous populist-nationalists by briefing the anti-nationalist media about ‘cybernats’ and how it is them (and certainly not any strategic blunders by you) which is preventing more progress.

In your head the task is complete; nationalism and populism are dead, reformers are isolated, you have a centrist policy platform and the infrastructure to impose it, you’ve monopolised the former umbrella brand thus control all messaging, your previous leader is discredited and there is now nothing to challenge your dominance. Sometime in the future you’ll be ready to win over that silent centrist majority you’re sure is there.

But your party votes against your platform at conference, they cling to solidarity with the rest of the movement when you attack ‘cybernats’ and, relentlessly, they march with their flags. What more can you do? Perhaps its time to move on…

Then, from the other side.

We are diverse; we came into 2014 from different places, but we discovered that we had common cause; the environmentalists, the social reformers, the nationalists, the democrats and the creatives. We discovered a surprising amount united us; we wanted change and would work together.

But when we lost and the momentum was gone, our obvious leaders (in the SNP) provided no direction and almost seemed to want to distance themselves from us (even party members). We just wanted to see progress, but no progress was being made.

And we kept hearing things that we didn’t particularly like (the repeated disavowal of ‘nationalism’, no sign of a case for independence, people looking a little too comfortable with a status quo that provided them good jobs, occasional attacks on parts of the movement from the top, an uninspiring domestic agenda…).

We believed so we tried to create our own momentum – but that was difficult when people pushed in different directions. Most put their faith in the SNP, many in one of a number of initiatives taken to create some kind of direction and leadership. But pushing in these different directions only caused friction and argument.

READ MORE: Indy march organiser: ‘It doesn’t matter how many referendums it takes – we will eventually win’

Everything we try (from creating inspiring visions to holding our opponents to account to building campaigning infrastructure) is ignored or undermined. The more times many of us call for loyalty, the less that loyalty seems to deliver for us.

Then, from nowhere, a whole new agenda lands with a thud, a strange and alien agenda. A ‘super-soft’ independence none of us were asking for is imposed. The policies move to the right, almost as if alienating a large number of us is the plan. Another group of us are tarred with quite unbelievably hostile language by people who are supposed to represent us.

The only reason we still exist is because of the endless hard work put in by an army of volunteers who keep our Yes Hubs going, keep our local Yes groups meeting, who write and meet and listen and think and argue and make the case. But the more we do, the more we seem to be opposed from above.

And throughout all this we are promised light at the end of a tunnel which remains dark as far as the eye can see. We get restless. We have handed over our hopes and ambitions to a leadership which seems to use them for purposes different than those for which we gave them. Our money does not seem to be spent on the campaigning we want to see.

So, frustrated, increasingly disillusioned, we do what we’ve always done. We do SOMETHING. We do anything other than sit back and take it passively. And if all we can do is march, then that’s what we’ll do.

We march joyously and hopefully. We march as perhaps the most diverse group Scotland has ever seen march. We march to send messages to anyone that will listen that we have not gone away and will not go away. We march because we care, we really, really care.

But why oh why oh why can’t our leaders understand this? Why do you disdain us so much? Why can you never find a kind word for us, why are there never ten free seconds for you to send us a tweet to wish us well? Why do you refuse to see what’s happening?