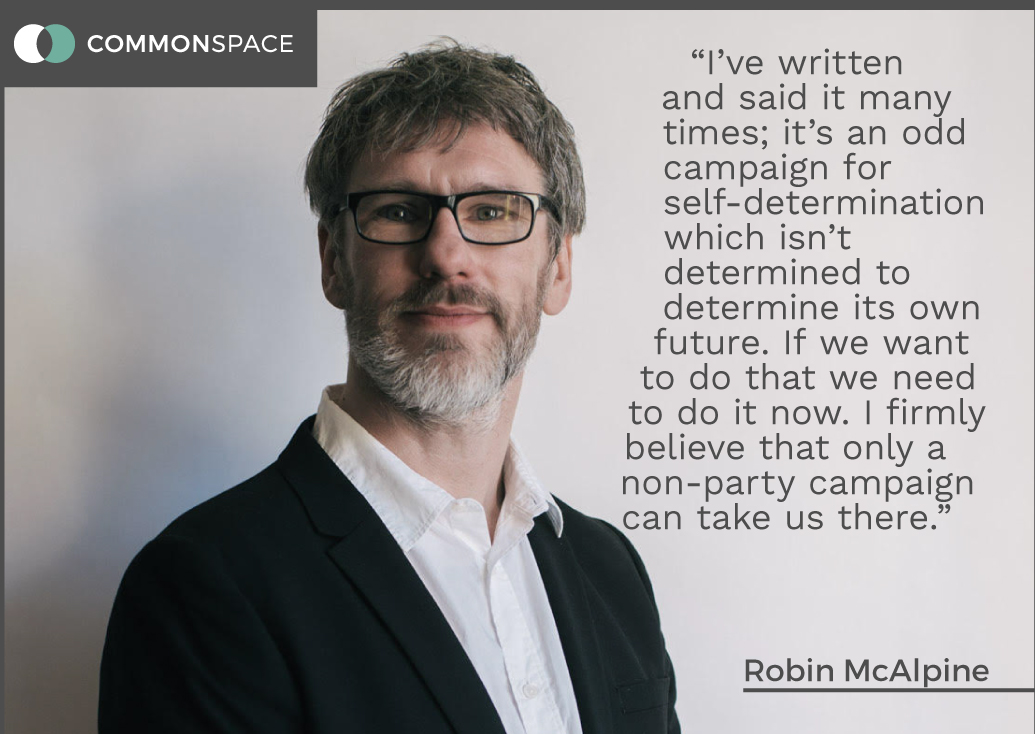 I HOPE this is the last time I ever write this – I’m getting bored of saying the same thing over and over and so you must be getting bored of hearing it. But if the letters page of the National, the public comments of prominent figures or a big majority of the conversations I’ve heard all over the country are anything to go by, this is the talk of the steamie.

So one last time; from where we are we need a non-party political campaign to make further progress towards independence. It must be effective and professional, so it needs an organisation and that needs to be resourced. And it won’t be operational or start to take effect overnight.

Which means we need to face facts; this is our last chance to do something powerful and proactive at a national level before the 2021 Scottish elections. Either we do this now or we’d be as well waiting until we see what happens then.

This is a touchy subject for me. I’ve been banging on about this since 19 September 2014. I’ve been working with people to build a coalition to get this done (mainly through the Scottish Independence Convention).

I’m on my third proper written proposal for this and the issue has been debated endlessly. But there’s always been a reason to wait just a little bit longer – lack of confidence about whether we could raise the money; waiting to see if the SNP was going to take a lead; doubt about whether it would be welcomed by the SNP leadership; Brexit apparently changing the timetable and so on.

READ MORE: March for Independence to ‘send a message to the powers that be’

So let me make the case again. And let me start by saying this is no more a criticism of the SNP than it is of the Greens – it’s just a reality in professional campaigning circles that having the branding of a political party attached to a campaign closes it off to a large audience.

It doesn’t matter if they’re right or wrong, a significant proportion of the people whose minds we need to change recoil from party branding. They’re very disillusioned, or they don’t like a given political party for a separate reason.

We need another way to talk to them, to reach them. It has to be civic, not political.

But it also needs to be professional. I wrote about this last week – campaigns that win always do the same things. They don’t guess what the target audience thinks, they research it. They don’t just make up slogans and campaign themes, they test which ones work.

They don’t hope people will self-organise, they support them. They don’t wait until someone else comes up with answers to key questions, they produce them. None of this can be done without resource.

READ MORE – Exclusive: ex-chair of Scottish Independence Convention says SNP “needs all the help it can get”

There seems to be some misapprehension about what this kind of organisation does. For example, there has been debate about which well-known figure should ‘lead’ it. But the question of who acts as ambassador or spokesperson comes later. There’s a lot of work to do first and whomever heads such an organisation need not be a known name or a public speaker – they need to know their stuff.

There are basically four things the organisation needs to do – develop strategy, support and coordinate with the wider movement, produce research and rebuttal and then prepare and deliver communication and campaign material.

We need to know what wavering voters need from us if they are to ‘cross the road’ and vote Yes. Is it really ‘answers to questions’? Is it reassurance? Is it the belief that their life will get better? Is it cultural and emotive? It’s probably a mix of all of this, but we need to know.

Then you can work out how to give them what they need – answers which are simple to understand, clarity on what will happen after a vote, case studies of how it will be better for them and their family, humour or passion or stoicism or calmness. You should never assume these things, nor should you try ‘a bit of everything’ and hope something sticks.

Once you know this roughly you can begin creating the materials and tools to make it work. For example, if you want to show that it can benefit someone’s life you need information that can show them (rather than tell them) what it might mean.

I’ve used the example before but if you’re in your early 20s and debating whether to turn out and vote, understanding that there are up to 20,000 civil service jobs for people just like you after a Yes vote is an important motivator. That kind of information must be produced and packaged.

That’s the research role – take what you know you have to get across and produce clever and memorable ways of saying it.

Then you need to get it to your target audience. That means two things. One is to use a very effective peer-to-peer approach. I know I go on about the Bernie Sanders campaign in the US a lot but it is so close to the model that we should be using that it’s hard not to.

Basically, we have an already-existing local network of activists who are desperate to be armed with messages and materials to deliver. Campaign strategists would kill for that kind of capacity. But then they would use it in a coordinated way, not just the ‘here’s a leaflet, fingers crossed people use it’ approach.

Our local groups need to be armed with materials and supported with training on how to target it and how best to communicate it. As this is published I’m on my way to Aberdeen to talk to the Aberdeen Independence Movement and I’m meeting people beforehand.

They want to make an assessment of the number of civil service jobs that could come to Aberdeen if an independent Scotland’s energy department was moved there so they can make the argument locally. There should be an organisation to help them with the research.

But there isn’t, so Common Weal will do what it can. We’re just not resourced to do this on top of everything else we do too (we have a total annual spend on wages – including CommonSpace – which is less than the salary of the Chief Exec of the SNP).

The other way of reaching your audience is a proper comms strategy. This does not mean banking on them to be listening to GMS or watching Politics Scotland where your preferred politician can battle it out with the other side’s preferred politician.

It means using every tool – yes leaflets and posters, but also social media and mainstream media strategies, events and stunts, direct mail and lots more. Basically everything EXCEPT politicians poking each other in the eye on national TV…

I understand now that much of the fault of not explaining this lies with me. I assumed inside knowledge that people perhaps didn’t have. The model above is so routine in my profession it is assumed.

It is the model used in every campaign you can think of, from a bank lobbying for deregulation to a referendum on Aborigine rights in Australia. In the US there are thousands of people for whom this is their whole profession, moving from state to state to run campaigns in election after election at local, state and federal level.

And this is what the other side is doing to us. They did the research and prepared a campaign with comms strategy straight after Brexit – we kind of guessed what to do. They picked up that the public wasn’t in the mood to hear the word ‘referendum’ again; we didn’t.

But none of this happens without resource. I’ve done a very basic costing for this and a basic office with four professional staff, with at least one with extensive experience of this work, is going to start at about £150k a year. So either we raise it or we don’t.

After three years of nagging people about this I was just about to give up, at least for a little while. But the current surge of support for this idea has opened a window of opportunity again. I think its our last credible chance before 2021.

And there are things still to work out – how to set up a governing board for the organisation with representation from the political parties and the non-party movement. But we need to get moving.

I don’t know what I can suggest that you do to try and make this happen. Perhaps you just need to be vocal about it, to tell whomever you can that you support this idea and want to see it happen now. I’m almost tempted to set up a bloody petition.

If between us we find one more reason to wait a bit longer, to ‘make do and mend’ with what we have, it doesn’t mean we can’t win a referendum. It just means its totally out of our hands and we need to cross our fingers and hope something else delivers it for us.

I’ve written and said it many times; it’s an odd campaign for self-determination which isn’t determined to determine its own future. If we want to do that we need to do it now. I firmly believe that only a non-party campaign can take us there.

So it’s up to us whether we do it or not.