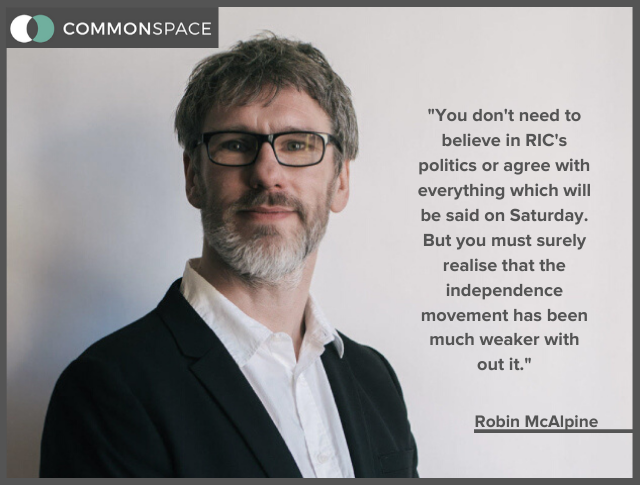 As a long-standing RIC activist no-one needs to tell me about shortcomings or imperfections – it has always been a large and diverse coalition ranging from very experienced old-hands to new enthusiasts and much in between. There are things which RIC is not; it is not a whole campaign in waiting.

But in some ways it is more important than that. The independence movement has become something of a monoculture in recent years. This is because a lot of people (most well-meaning, a few not) bought the argument that loyalty was key.

It’s not that many people liked the Growth Commission or that they are actually enthused by the People’s Vote love-in or that they were happy with the compulsory testing of children in Primary One. It’s that they believed unity was strength and division was weakness – because they believed in the cause.

Of course to an extent this is true – I favour loyalty to a cause too. But there’s a flip-side, which is that with no dissent, no disagreement and no debate, you risk ending up in a mindless perma-rally where everyone is expected to do no more than provide standing ovations at clearly-signalled moments.

This is deeply, deeply unhelpful. It is a breeding ground for bad ideas because they are not tested, are not properly debated. The Growth Commission is a case in point.

While I know most of you don’t read economics for fun, much has been happening in the last week or so. It’s because former Central Bank leaders and others have been getting together for a blether and they’re being unusually candid.

Mervyn King (former boss at the Bank of England) was pointing out that the entire global economy is at risk of massive failure because the banking system simply wasn’t reformed, no new economic thinking took root after the financial crisis and it’s all going to happen again.

Or let’s take Larry Summers, former boss of the US Federal Reserve (like their Bank of England). He’s been pointing out that one of the biggest risks to the global economy is that there is now more money floating around than good uses for that money.

He warns that if the global economy doesn’t absorb this money there will be a financial crisis, and he points out that the only part of the global economy really equipped to absorb that money is the public sector. Borrow to invest for the good of capitalism is the new mantra.

From Plaid Cymru leader Adam Price (Plaid is way to the left of the SNP) to Chancellor Sajid Javid (definitely to the right), everyone with any sense whatsoever is talking about the need for the public sector to borrow to invest to stave off crisis. Even Trump is doing it.

The SNP is a stand-out, the only party I can think of currently committed to squeezing public expenditure as a long-term strategy. All because one author thought it would please the bankers and because it was rammed into policy with next to no meaningful debate.

If your social movement consists only of entities that can be controlled from the top, and if the top doesn’t like dissent, how to ideas get tested?

Even more so, how do strategies get tested? We seem to be tied to one strategy – and I use the term very loosely here. That strategy is that by being good boys and girls and respecting not only the system but also its own self-importance, the system will reward us with a referendum and the affluent middle-class Remainers will reward us with their votes. That’s it. That’s the strategy.

And when someone proposes to debate that strategy at a party conference, he is not only massively voted down, he is actually booed.

Let me be clear; I don’t think that version of Plan B was a good idea. As I’ll explain when I talk to the RIC conference on Saturday I believe we’re going to have to use protest and non-violent civil disobedience as part of our campaign – but we still need a mandate and so that strategy is necessary to get a referendum, not to avoid one.

But how is this going to be explored without debate? If we can’t debate ANY Plan B, how can we have any confidence that Plan A is fit for purpose (or even exists)?

READ MORE: Radical Independence conference: Putting Jeremy Corbyn in Number 10 will not solve the crisis of the British state

So first we need RIC because a movement and a cause as wide as this needs diversity and debate, not uniformity and subservience.

Second, we need RIC because throughout its entire existence the SNP has never once achieved as many votes as will be needed to win an independence referendum. It has been entirely understandable that they’ve pushed ‘we need a parliamentary majority’ as a vote-maximising strategy.

But when that has branched out into ‘and the SNP is all you need to win a referendum’ we get into very different territory. RIC sometimes romanticises its heroic role in ‘the schemes’ but make no mistake, we most certainly did deliver votes the SNP and Yes Scotland failed to reach.

We need every vote we can get – RIC, Women for Indy, some replacement for Generation Yes, the lot. Anyone we can reach. Control-freaking these groups out of the picture is good only for control freaks.

Finally, we should all remember where RIC came from. Exactly like Common Weal, it was at least in part a response to where the independence campaign was at the time.

Memories are fading but when that first RIC conference took place in 2012 the independence campaign was frankly woeful. Yes Scotland was still focussing on its furniture, the SNP was conducting the whole campaign through spreadsheets showing you’d be a few quid better off if you voted Yes. And that was about it.

Alex Salmond (a man whose campaigning skills I greatly respect) had at best a lacklustre campaign, John Swinney was reliably cautious and frankly there weren’t many other visible SNP figures.

What RIC brought was youth, energy, enthusiasm, excitement and hope. I was at an large event in London recently and during a panel question and answer someone ask Guardian columnist John Harris when he last felt really optimistic. His reply was ‘at a RIC conference’.

So as those memories fade, don’t allow the post-referendum party politicking to obscure the reality. The SNP might well have wanted to prevent RISE from getting any support, but extending that to attacking RIC’s legacy was petty.

Campaigns need inspiration, different voices, at least someone who is willing to take a chance and offer a vision and not just toady around to establishment figures.

I can only repeat that RIC isn’t a fully-formed anything just now. It isn’t perfect (I wish we could get beyond shouting about ‘the schemes’ and the monarchy and working class revolutions and focus on concrete reform that benefits everyone from the homeless to the insecure middle classes).

But if you thought about shrugging off Lesley Riddoch’s offhand comment that she’s so frustrated with things that perhaps a new political party might be needed, you might instead focus on the fact that this was at an SNP fringe meeting, it was met with a widespread round of applause and at least one person shouted out ‘I’ll join’.

At a party conference? That doesn’t happen. It just shows the gulf between the top and bottom of the movement at the moment.

And right now, RIC is definitely at the bottom of the movement, not supported or encouraged by those at the top, barely tolerated at times when it’s not being mocked.

It’s an enormous mistake. You don’t need to believe in RIC’s politics or agree with everything which will be said on Saturday. But you must surely realise that the independence movement has been much weaker with out it.

Welcome back RIC. We definitely need you.