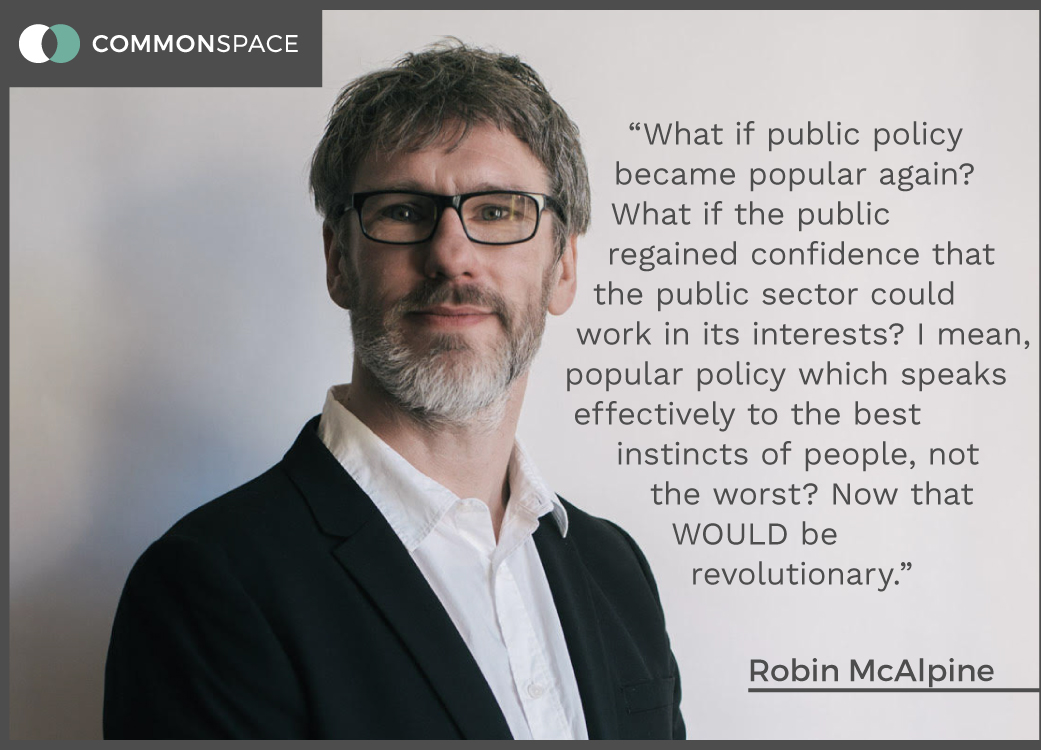 Common Weal director Robin McAlpine says that while big banking executives may be frightened by an approach to public policy which comes from ‘nowhere’, grassroots and transparent popular policy could be revolutionary

IT’S been a good week for Common Weal, and perhaps the highlight was when I got the text last Friday night to say that after a great targeted campaign by the team we, alongside our grassroots partners in the SNP, successfully got a motion to support a National Infrastructure Company onto the provisional agenda for the SNP Spring conference.

By far the main reason for this is that it’s a solid, common-sense idea. In fact, I don’t want to give away too much about the extensive conversations we’ve been having on this but we’re getting support from all sorts of places you might no initially imagine.

But what struck me in all this was something really encouraging – if we can make this government policy, it would mean we’re seeing a still-embryonic but still quite clear new investment framework emerging in Scotland.

Alongside the National Investment Bank we may soon have an Infrastructure Company. These might not sound exactly like the revolution has begun, but it would mean a major financial institution in Scotland was designed specifically for the public good.

And it would be sitting right next to an organisation which would finally end PFI in Scotland and bring a new quality-driven approach into public infrastructure.

These shouldn’t be unusual developments (in many countries this is routine). But in a country so dominated by big finance, they are.

It was brought home to me in a side conversation I had at the really enjoyable Lochaber independence conference at the weekend. I’d missed it but a well-known figure in Scottish ‘big banking’ apparently wrote an article on the National Investment Bank which was critical.

I don’t have the link (and it’s behind a paywall anyway) so I can only repeat what I was told; that basically the article complained that the whole initiative was ‘flawed’ because it had ‘come out of nowhere’.

The (well informed) source I spoke to translated that very succinctly for me.

“The whole article was basically complaining about one thing – that financial policy in Scotland was not being written by his friends.”

Because it really didn’t come from nowhere. National Investment Banks are normal in all sorts of places. And unlike recent decades of financial and economic policy which emerged wholly-formed from the rooms where government minsters and ‘financial movers and shakers’ meet, this was all public domain.

Common Weal first set out the case for an investment bank in a book in 2013. We published a paper (jointly with the New Economics Foundation, Friends of the Earth Scotland and financial campaign group Move Your Money) a couple of years later.

That made a much more detailed case for the bank. But it didn’t cover some of the very technical questions, so we published a second paper (jointly with NEF this time) which covered details like the relationship to EU competition policy and the treatment of bank debts in terms of public sector accounting.

Alongside our partners, we then campaigned openly and transparently on this work. We met senior civil servants, senior economists and other interested stakeholders. We campaigned to get this to be the official policy of the SNP. We held a fringe meeting at the SNP conference, an event at Holyrood and an event at Westminster.

Then we worked with the Council of Economic Advisors to prepare materials to make the case at one of their meetings. Every bit of this we did in public.

It was then considered at length by a commission led by the Chief Executive of Tesco Bank. The consultation really only received one negative response – the author of the critical article was involved in that one too.

The proposal stood up, it had overwhelming support – and soon we’ll have the bank. Surely that isn’t nowhere?

In fact, surely this is a model of open, transparent policy-making? Surely a society which generates lots of solid, properly-developed ideas and then has a public debate about them is a model we should support, one we want to see more of?

READ MORE – Risk that public energy company could be ‘like all energy suppliers with a Scot Govt logo’, experts warn

Because here’s the thing – I’m pretty sure this policy agenda is one that the public, the public sector and the SME business sector is going to like. It’s time to have a bank that works for people, not against them. It’s time that the PFI nonsense was brought to and end.

We know from lots of polling work over the years that there is a lot of public support for these kind of public initiatives which are powerfully on the side of the public. The question has always been ‘why don’t these things happen if the public really wants them?’.

The answer is that, bluntly, powerful interests often kept these kinds of initiatives firmly fenced off in a place called ‘nowhere’, a place where these ideas could be deemed ‘non-mainstream’ or ‘lacking in credibility’ because they didn’t have the endorsement of financial gatekeepers.

We still talk down Scotland as a place where public policy is innovative. There is some good reason for this – government here (like government in so many places in the western world) remains far too close to big corporate and financial interests.

But what I think we have in Scotland is still a greater will to try something different, better, more innovative. The proposal for an Infrastructure Company may not immediately strike you as an obvious public talking point. That idea has been dispelled by the strength of support lots of people (interested members of the public, members of political parties, elected politicians) have shown.

I really hope the Scottish Government capitalises on this willingness to innovate in Scotland. Because there is much more we can do.

Common Weal has a couple more initiatives on ‘investment infrastructure’ we’re working on, one for a model of high-quality, subsidy-free public rental housing, one exploring the possibility of an Ethical Stock Exchange to help medium-sized enterprises capitalise in the way they want to. Taken together, Scotland would have a powerful public interest investment framework if these were pursued.

READ MORE – Stopping another Carillion scandal requires a public solution to a private problem, and this is it

And this is just one narrow area. Scotland’s democracy needs a shot in the arm, most especially at a local level, but also in terms of new forms of participatory democracy. We need a different approach to land and housing.

Steps have been taken on a public energy company – this could be really powerful. Small steps have also been taken on tax and these must now lead to a serious replacement for the deeply flawed Council Tax. We need to be radical on ‘big data’, keep exploring Universal Basic Income, be bold on the roll-out of electric and driverless vehicles.

Early years education should be reassessed (more play, less testing). Radical new approaches to public procurement and town centre development could have major impacts. And these are only a small selection of the big ideas that can be found if you spend a little time in Scotland listening to what we’re all talking about over here in nowhere.

There is of course one big risk to all of that – which is that it actually works. Because if it does, ‘nowhere’ could start to become the new ‘here’. Let’s be honest, public policy isn’t all that popular a subject among the public.

So they’ve tended to shrug when things are mainly done in closed rooms with the same-old powerful interests. But what if public policy became popular again? What if the public regained confidence that the public sector can work in its interests?

I mean, popular politics which speaks effectively to the best instincts of people, not the worst? Now that WOULD be revolutionary.