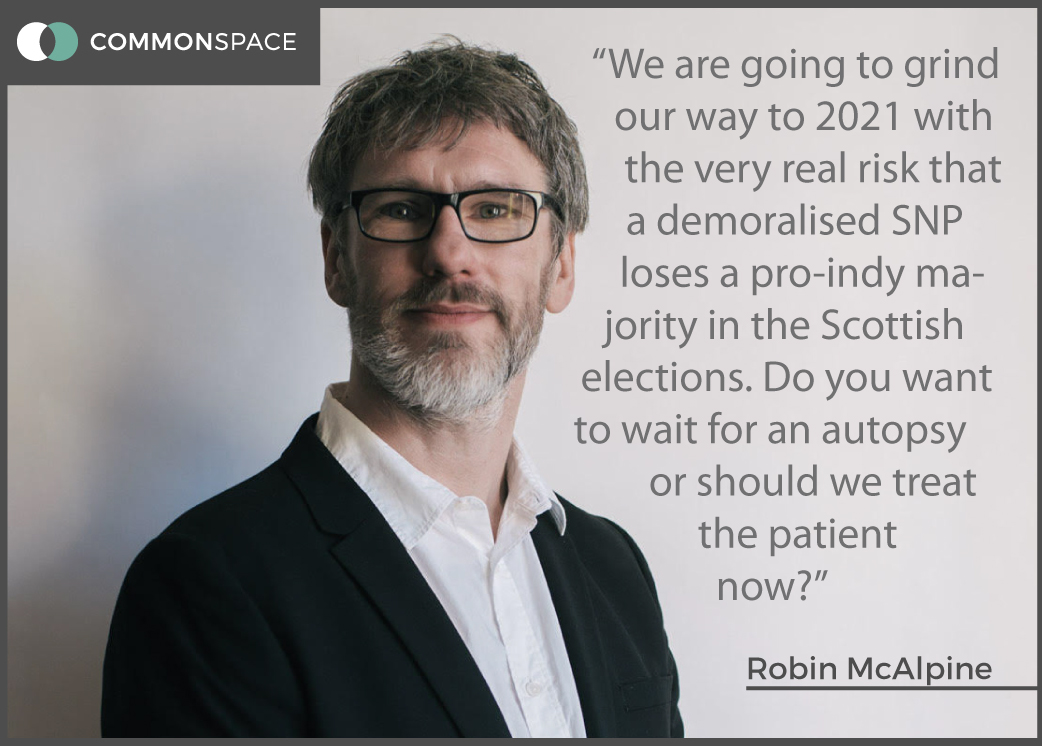 AT THE 2016 Scottish Elections, when there were strident calls that only ‘Both Votes SNP’ would deliver a second referendum, there were quite a few of us who mistakenly thought that meant a second indyref and not a ‘People’s Vote’ on saving the UK from itself.

Because it’s the People’s Vote that gets the press release, the photo op, the banner, the media interviews, the parliamentary speeches. The indy movement gets the hundredth vague promise of a vague timetable for a vague timetable. In a throwaway sentence. A day late.

But to do that it will be helpful to accept that the place we have arrived at now was not inevitable, and that, had different decisions been made, we could be in a completely different place – and a much better place.

Imagine the last three years more like this; on Brexit morning we observed the wreckage and said ‘right, this is a total shitstorm so we need to wait until visibility improves before we make our play’. We focus on the disparity between what Scotland voted for and what Scotland is going to get – and the disintegrating mess of UK politics.

We’d then have had time to discover that the giant ‘indy-bump’ so many were absolutely sure would arrive in polling didn’t happen. Thankfully, the wisdom of waiting a couple of weeks meant that we didn’t say the word ‘referendum’ – the UK’s least favourite word at that time.

We therefore wouldn’t get dragged down into a sterile debate about procedures and processes, wouldn’t have left unionists in Scotland with an open goal at the 2017 election and wouldn’t have spent the next two years on the back foot.

And since we hadn’t said ‘referendum’, we wouldn’t need to make a humiliating climb-down within the year. Instead, we could have prepared for the moment when we could have the most effect.

That wasn’t when the political and economic establishment were rolling out their same-old projections of doom but rather when the public could finally see that this is really failing, that Britain is really broken.

READ MORE: After May’s defeat: Indy activists on what comes next

Which is to say, we could have waited until this week. That would of course have given us two years to get ready – with a new case for independence, with a really solid campaign plan and campaigning structure.

We’d have had plenty time to get the movement prepared, trained, engaged, ready. We would have something like a proper strategy for moving forward. Perhaps it would have been the launch of a very extensive poster campaign right across Scotland which might simply have said ‘No Confidence in Westminster’.

Since we’d have been running an all-movement, non-party campaign which had been quietly and carefully seeding this idea (that Britain doesn’t work any more) for two years, the public would be susceptible. Rather than shouting ‘crisis!’ every two minutes for two years, we could say it now, clearly – and be listened to.

By next week, having seen public opinion move by focusing on lack of trust, we could be rolling out our plan for independence. It would explain how we were going to create a new country (in detail, none of that ‘it’ll be the easiest deal ever’ stuff the Brexiters fell for). It would have a draft constitution to show people how Scotland would avoid the mess of Westminster in future.

There would be a budget for year one and a draft Withdrawal Bill to explain the steps we’d take to negotiate our departure. We’d look like we were really ready, knew what we were doing.

READ MORE: Ashley Graczyk: We need a double referendum in 2019

So, in two weeks’ time, when we passed the legislation in the Scottish Parliament calling for a Section 30 Order for a second indyref, we’d be in prime position. No-one in Scotland would have been subjected to endless talk of ‘another referendum in Scotland’. This would have been fresh, new. It wouldn’t be against the backdrop of two years of endless unionist campaigning against us.

And because we’d gently and gradually tried to win people over against the backdrop of a failing UK political system (not trying to bounce them there in one big step), we’d actually have achieved a consistent pro-indy majority.

Which means we’d have a decent chance of wringing the Section 30 Order out of Westminster – with widespread public support. And we’d be primed, motivated, buzzing, raring to go… for a referendum in 2020 which I think we’d have won.

Instead we did shout ‘referendum’ at the first chance and dragged everything into a sterile debate about process. We did make a humiliating climbdown. We did face the electoral consequences. We completely failed to prepare.

And so we reach a point where ‘tactical genius’ is apparently to issue a public statement on the day that Westminster fell apart – which didn’t mention independence.

I rehearse all these arguments to emphasise that there are always choices, always different paths to take. So my question is – if you’ve already been led down the wrong path, why would you keep following?

Do you really want to spend the next year or two putting all your effort into a People’s Vote? I’m afraid that I think the window for a pre-2021 indyref is now closed – because of negligence.

Has unthinking loyalty helped us any? Do you still believe in the Infallible Tactical Genius of Great Leaders? Can the movement live on the crumbs we’re thrown forever? If this latest ‘timetable’ ever actually appears, do you really think it will tell us when a referendum is going to be?

We are going to grind our way to 2021 with the very real risk that a demoralised SNP loses a pro-indy majority in the Scottish elections. Do you want to wait for an autopsy or should we treat the patient now?

If you favour acting before it’s too late, I’d suggest a few approaches. First, we need to stop telling ourselves that we’re a movement and start acting like one. The purpose of a political movement is not and has never been to act as a bodyguard for a government.

The point of a movement is that, when big change is needed, it needs many brains, many hands, diversity and difference. I spend lots and lots of time in the independence movement. For a long time now the major sound has been the deep grumbling noise that comes from dissatisfaction, from people feeling that something isn’t being done right.

That grumbling noise is spreading everywhere – from the casual supporter to senior politicians. The number of people I know who are saying in private that everything is going well is more or less zero.

So it must become a cry demanding that the broad, beautiful movement which is the independence movement takes back control – with the grassroots of the SNP leading us in that cry.

That means that we should get behind the new pro-independence campaign organisation in Scotland which is soon to be launched. It is owned by the whole independence movement (through the SIC – which any organisation can join). It looks like the only game in town.

Then we need to listen. The biggest barrier to changing the minds of voters just now is their worry that the Brexit process would be repeated if Scotland became independent – that we’d simply blunder into negotiations unprepared, without a clue what we were doing.

So we need to find a mechanism to solve this. The ‘top table’ is not going to do the solving, obsessed as it is with perpetual control and paralysed as it was even before internal blood feuds broke out. People need to start demanding this happens.

And it can no longer be a crime punishable by trolling to ask what the electoral strategy for the 2021 Scottish elections is going to be. Two-votes-SNP and dusting off the life-sized cardboard cutouts of the party leader isn’t going to cut it.

(I should emphasise here that I don’t have a definitive answer and loathe getting into party political strategising like this, so just want to say we need to talk about this sooner rather than later.)

If the sight of the SNP all getting together for a photo-op on ‘how to save Britain’ on the day of Britain’s biggest crisis in half a century isn’t a strong indication that we’ve arrived at the wrong place, I don’t know what it will take to wake us up.

The first step in saving the cause of independence for this generation is to allow some much-needed dissent, to encourage some open discussion and to ditch the hero worship.

We didn’t ‘arrive’ here, we let ourselves be dragged here in error. Surely enough is enough? Because our future remains bright if only we were allowed to walk towards it.

WHERE NEXT FOR BREXIT? CommonSpace Live Show Thursday 17 January, 7pm on Facebook 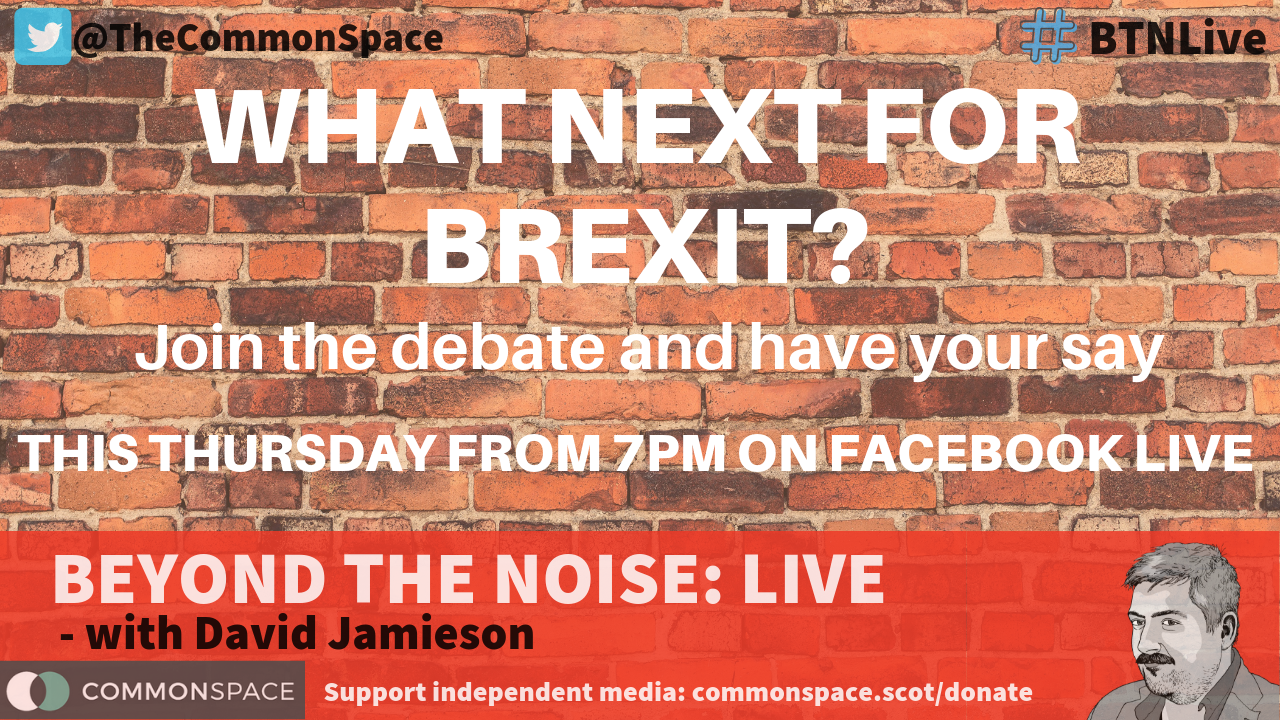