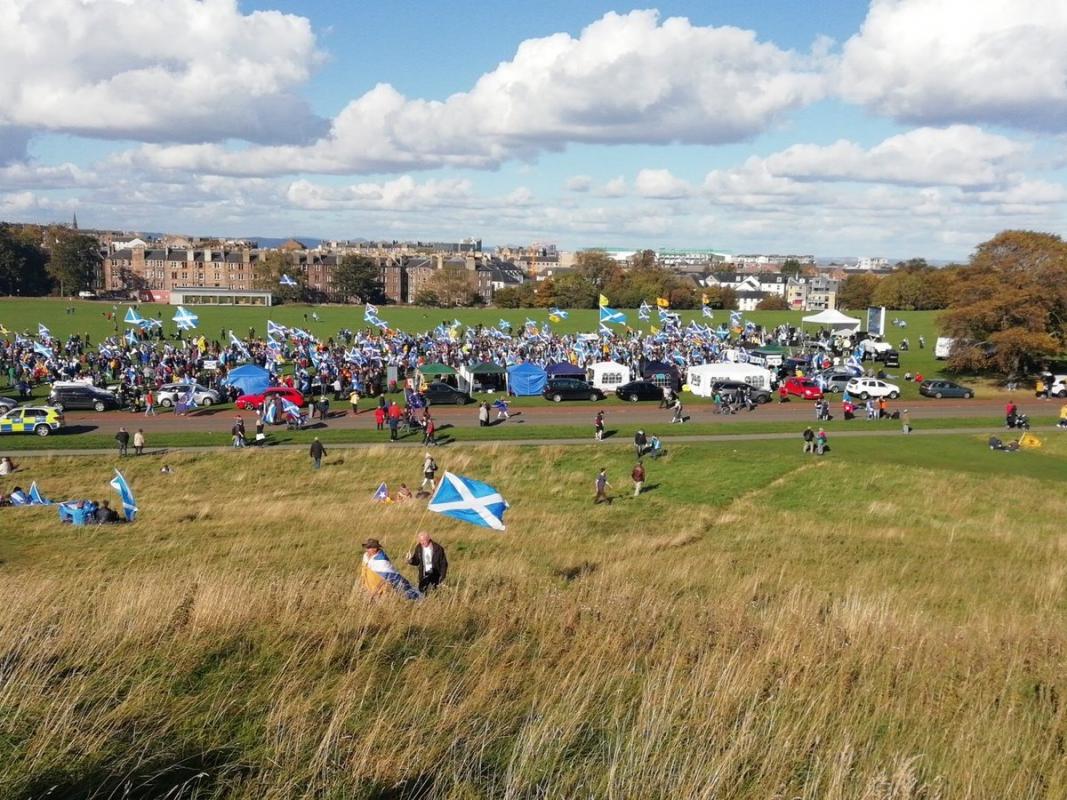 Robin McAlpine, Common Weal Director, says the independence cause is being let down by a chronic lack of leadership – if that doesn’t change soon the moment will be gone

“ONE small step for man – because these space-trousers are tighter than they look.”

“I have a dream – which I must remember to tell you about some day.”

“We shall fight them on the beaches – but we’ll probably just give up after that.”

“Sometime in the not too distant future, when the dust has settled, then probably the case for Scottish independence will be a little bit stronger.”

A life that is remembered is remembered for very few things. These are the moments that define us, a strange alchemy of events and our responses to them. Most of us will live an entire life without having a moment like that.

The people who get such a moment, and get that moment right, change history. The people who blow it are seldom remembered in the history books other than as a failure in a footnote.

So what in the name of god are we doing? More than two years ago it became clear that a crisis was going to befall the British State like none it had faced in decades. We knew it would strengthen the case for Scottish independence. We knew it would be a spur, a hook – a moment.

Which raises the not insubstantial question of how it is exactly that we’ve arrived at this moment and our leaders look totally unprepared and seem incapable of summoning up a response appropriate for that moment.

Was this a surprise? Did no-one tell them Brexit was happening? Did the one time they thought they’d shown some nerve put them off trying again (you know, on Brexit morning, when the difference between boldness and folly seemed to escape them)?

I don’t know what you think, but when I’m looking into the eyes of the unionists what I see is bemused relief. They were quite clearly ready for a fight – they’re rolling out their greatest hits again, commissioning opinion polls, calling people names. It’s like old times.

Except… no-one is fighting them. Just like most of the independence movement, they’d been expecting our leaders to step up, to grab this moment, to take the fight to the heart of failing Britain. They ‘tooled up’, met at the agreed location and prepared themselves for the battle of their lives.

And we didn’t show up.

Instead our generals seem intent on finding anything they possibly can to hide behind. Saving Britain; fighting for trade deals; getting another vote (as long as it’s not on independence) – look busy, stay safe.

READ MORE – Brexit views: What should the outcome of talks between Sturgeon and Corbyn be?

In fact, I imagine them humming desperately to themselves as if to reassure us they’re not feart while they announce that there is some ironing that is really needing done and that now is an important time to change the washer on that tap that’s been dripping in the garage.

If my communications over the last week are anything to go by, the movement is utterly confused and increasingly demoralised with a steady growth in shares of fury. We’re all clutching at straws – and we can barely find a straw to grasp.

When are we going to face up to the reality? We have no coordinated campaign structure in place. We have very little serious preparatory work done from which to build a serious campaign.

We’ve done little to take on the difficult questions that inevitably await us. GERS, borders, currency, exports, trade – all float in the air like ghosts while we hide under the bed.

Common Weal has done its very best to produce constructive work on a new prospectus, but we’re simply ignored. At the moment there is nothing serious to offer Scotland beyond a rehash of the 2014 White Paper and the utterly calamitous Growth Commission report which will sink us all but somehow floats around undead on a sea of paralysis.

The opinions polls have barely moved in four years and we’re still sitting (on average) on the wrong side of a majority. We have an (at best) lacklustre government which is not motivating voters. That’s why it’s now coming on for two years since there was last an opinion poll indicating that we’ll secure a pro-independence majority in the 2021 Scottish Elections.

And since there is very clearly no plan of any sort for how on earth we’re going to prize a Section 30 Order from the clenched fist of Westminster, a realistic assessment might conclude we’re in trouble.

If we weren’t so busy running away we’d be staring into an abyss. Unfortunately abysses have a habit of chasing you around. If you support Scottish independence, it isn’t just ‘going to be okay’. We act or we lose.

The following is, give or take, what I think we need to do:

·     We need to admit to ourselves that there is no plan and no strategy. The ‘leadership’ – what is it, one person, two? – refuses to lead. Worse, they’ve made a mess of things on the rare occasion they try. The ‘you’ll be informed when the emperor is good and ready’ shtick is beyond threadbare.

·     We need to swing behind a collaborative, collective campaign that is effective and urgent. It needs to include all of us. And it needs to get started. The Scottish Independence Convention plans are the only option I can see that is left.

·     We need a clear plan for a referendum. First we should signal that in October next year we will ask for a Section 30 Order with an intention to hold a referendum in September or October 2020. Come October we must demand it. If they say no we need to go on a war footing.

·     By then we must get popular support up consistently above 50 per cent. See ‘swing behind a collective campaign’ above.

·     Next we need to accept that a Growth Commission report which can barely get any support from the independence movement is hardly a solid foundation to take to the people of Scotland. Get it killed off once and for all. Quickly.

·     Once it is gone we need to look again at the questions it failed to answer. We need serious research work to knock down the other side’s arguments about exports and finances and borders and the economy. We need to control the story.

·     Then we need to get our heads in the game of building a prospectus. In the post-Brexit environment it is utterly imperative that we look like we know what we’re doing, that we’ve got a plan. Relying on ‘it’ll be okay’ or ‘that question is for after independence’ is suicide.

·     And we must hear no more of the ‘thinking for yourself is treachery’ nonsense that did so much to get us here in the first place. Total loyalty and unthinking silence has not worked.

Unless you want to wait until some time after 2021 (fingers cross, eh?) or you have a cogent plan which is ready to go, I’d urge you to engage with these points. Yes, I’ve been making them over and over for more than two years now – but at least they still make some kind of sense.

READ MORE: If UK Gov blocks indyref2 we may need to seek another mandate in an election, Sturgeon says

What doesn’t make any sense at all is putting your faith in a strategy which is based on doing nothing until we are all coated in the settled dust of history. “Not. Too. Distant. Future.”? As in ‘Pretty. Distant. Future”? Jesus wept – you know eventually there will be no road left down which to kick the bloody can?

I’m wracking my brain to think of a time when I’ve seen a comparable degree of weakness at such an utterly crucial moment. I can think of few examples of a moment blown so completely and utterly. We are all being let down.

This is our moment. Are we going to tell our children that when that moment came, we hid? Fight or cower, it’s up to us. I don’t believe there’s a third option left.