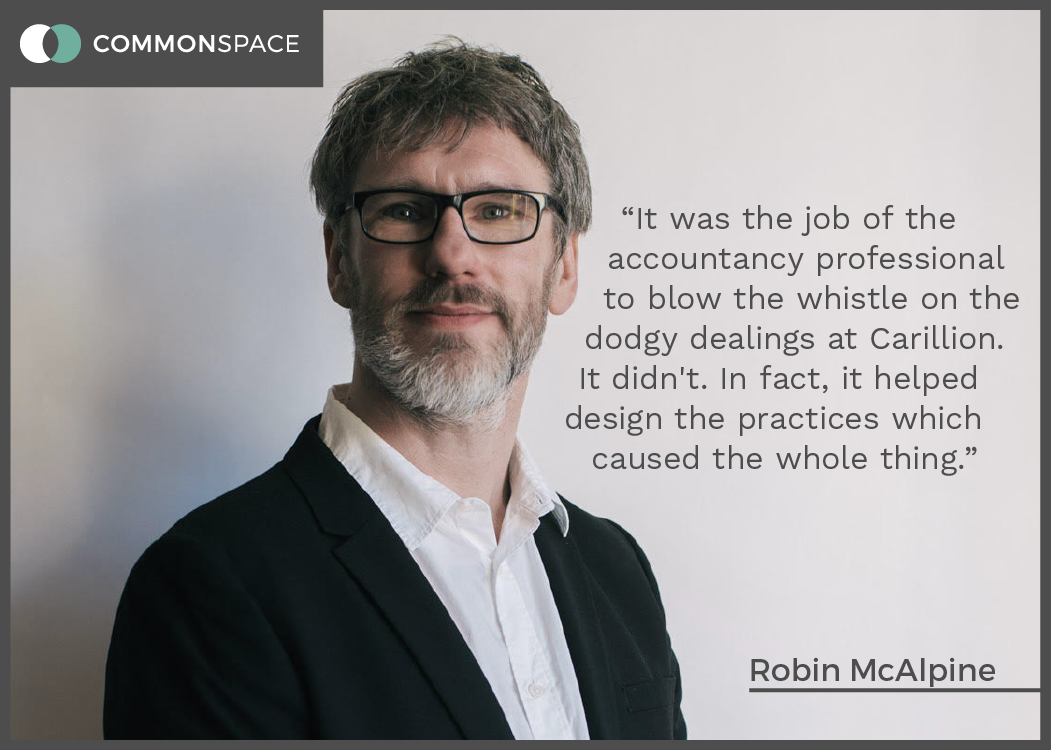 YOU KNOW in every TV series you’ve ever seen about organised crime – from the Godfather to the Wire – there’s always a lawyer, banker or accountant who enables the whole criminal operation but is clever enough to always be at arms length?

Now, imagine that the same person, the same lawyer or accountant who is neck-deep in every crooked and criminal act (just never actually there when the blood is spilled) was also working for the other side.

At the same time as they were telling the crooks how not to incriminate themselves on the phone they were also being paid by the police to provide information on catching the same criminals.

Deloitte, PWC, KPMG and EY exist in a universe that should not exist, one in which you benefit from success and failure equally.

Now, which of these two sources of income do you think they are going to be most keen to protect? And this, in a nutshell, is the world of the Big Four accountancy firms.

Deloitte, PWC, KPMG and EY live a charmed life. They exist in a universe that should not exist, one in which you benefit from success and failure equally, where there are simply no consequences ever.

Right now we have the sorry story of Carillion, the financial ruse that milked public infrastructure investment for private gain with little thought to public wellbeing.

Exactly how they did all of this is fairly obscure. While not a particularly easy read, this blog gives a pretty good description. It’s really quite hard to get your mind round, though.

The author describes Carillion as a kind of ‘inter-temporal portal’ – a time machine. It used the rules of accounting to almost literally move profits around through time and space to squeeze out the maximum spoils from contracts to build public hospitals and the likes.

Accountancy allows ‘profit and loss’ and annualised cash flow to be treated slightly differently. There are good reasons for this, such as when a good, viable business has invested heavily to generate productivity improvement in the near future. Accounting for that company at that exact moment can make a viable business look unviable.

We’ve grown inured to the fact that all the directors will safely stash their bonuses and other cash perks before anyone notices the game’s up.

What this accounting practice was not meant to do was to allow Carillion to ‘bank’ the guaranteed income it had coming in from public contracts years ahead of that income actually coming in, calling it profit and then borrow money to pay dividends to its institutional shareholders as if those future profits had already been made.

In its last year of existence, Carillion was paying out substantially more in dividends (on ‘profits’) to shareholders than it actually had cash in the bank.

But you know the problem with time travel; you’ll have seen enough movies to know that the paradoxes always catch up with you. The more Carillion cashed in on its future income, the more its future business model started to look more like a disaster movie.

So sure, the public gets badly screwed over. And we’ve grown inured to the fact that all the directors will safely stash their bonuses and other cash perks before anyone notices the game’s up.

But the actual company fails, so there’s some kind of justice, right? Well, not if you’re the enabler who set up the time portal there isn’t. Or at the very least, not if you’re one of the gang of four who run this whole racket.

It was the job of the accountancy professional to blow the whistle on the dodgy dealings at Carillion. It didn’t.

Because that’s what accountancy firms are supposed to do. They don’t exactly work for the company they’re auditing, they kind of work for the public, to reassure everyone in the market and beyond that when a company says it’s in healthy finances, it really is.

It was the job of the accountancy professional to blow the whistle on the dodgy dealings at Carillion. It didn’t. In fact, it helped design the practices which caused the whole thing…

And here’s the real kicker – given that there are only four of them, on aggregate they never lose. So sure, KPMG may be investigated for the clearly shoddy way it authorised accounts for Carillion.

But who got the contract to come in and act as liquidator to try and pick through the bones of the corpse? PWC. It might as well have been the other way round – PWC picking up the consultancy and audit fees, KPMG getting the liquidating gig.

This stuff all goes round in endless circles. I mean, take a wild guess who were the accountants who oversaw the sorry demise of BHS? Yup, it was PWC.

What is so concerning is that not only do these firms simultaneously provide accounting services (to reassure the public and the markets that all is above board) while also acting as consultants (showing firms how to make as much dodgy practice a possible look as if it is above board), they also act as public advisers.

Which is it? The great value to the public promised with one mouth or the fire sale promised to clients with another?

For 20 years now I have played some part in internal government policy making processes where one of the big accountancy firms (or a number of other legal and finance firms which have the same role) has been tasked to advise on the policy. Because they’re ‘neutral’.

Except the result is always a merger, or a new IT system, or the privatisation of assets. At which point the whole cabal descend once again on behalf of their clients.

And this isn’t even to touch on revolving door – these globally wealthy companies ‘donating’ their staff to government where they write tax policy, only to leave and make a lot of money fiddling the tax policies they’ve written.

Now let me be clear; as always we must separate the individual from the system. Many of the individuals from these firms I’ve met and worked with have been diligent and conscientious. Right now, EY is playing a major role in designing the Scottish National Investment Bank. And as far as I can tell, the individuals involved are doing a decent job.

But the system stinks – and everyone knows it. Companies advise on the real value of Royal Mail privatisation to government, and the same company advises its clients to get in fast because they’re getting a bargain.

Which is it? The great value to the public promised with one mouth or the fire sale promised to clients with another?

Scotland can’t keep the creeping tendrils of big money from entwining itself all around the system we have.

This is a corruption at the heart of our system. If you are near real decision-making, you will know this. You will be aware of the endless web of interests and influence that big accounting and big finance has across public decision-making.

Ideally there would be proper legislation to stop this – breaking up companies which offer both accounting and consultancy into two separate entities, making illegal the secondment of staff to government where there is a conflict of interest, banning senior civil servants from profiting from these companies after retirement and so on.

But this is all Westminster so there is little hope. Scotland can’t keep the creeping tendrils of big money from entwining itself all around the system we have. But that doesn’t mean we can’t change the system.

Common Weal has produced a lot of thinking in this area. A National Infrastructure Company to keep the financing and project management of infrastructure building in the public interest. A National Statistics Agency to reduce the dependency on commercial consultants for measuring Scotland’s economic and social progress.

I wish I believed we were at a point where the Scottish Government would have the courage really to challenge the way public policy is made.

I remember that at the time when the Enron scandal broke I was working on a project which had Big Accountancy involvement. I remember watching as the Big Five became the Big Four as the flat-out illegality and corruption of Arthur Anderson (the fifth big global firm) was simply too blatant to get away with.

I remember thinking at the time “surely this must be a turning point? Surely any sensible politician or civil servant will start to rethink the extent to which they have the public interest tangled up in this awful system”.

But dear god that was 17 years ago (my ageing bones just creaked). All that happened is that everyone became better at covering their tracks. The string of scandalous practices hasn’t slowed down – they gave us the banking crisis, in which the big accountancy industries were deeply complicit and every big corporate scandal since.

I wish I believed we were at a point in Scotland where the Scottish Government would have the courage really to challenge the way public policy is made and monitored. But I’m afraid the dependency culture is almost as deep as the Big Four’s pockets.

So next time, it’ll be KPMG liquidating PWC’s client, or Deloitte liquidating EY’s client. The only thing we can be sure of is that the scandals will keep coming – and it’s the public who will pay.