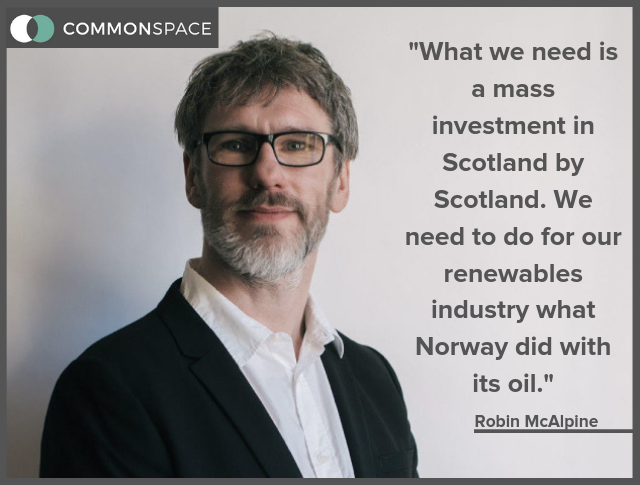 So when you peer through your fingers at the state of governance in the UK and the ferment of change taking place around the world, what you see are the ingredients for independence, its component parts. What you do not see is independence.

You can’t just leave self raising flour, butter, caster sugar, an egg and a teaspoon of baking powder on the work surface, popping your head back in every few months to see if its a sponge cake yet.

Every time you tell yourself all the component parts are there for us to win independence, what you’re really telling yourself is not what we have but what we need. You’re saying ‘we need to mix this stuff together and turn the damned oven on’.

We have a paper-thin lead in the opinion polls – so what do we need? Well, obviously a much bigger lead in the polls. I’m absolutely with those uncomfortable that we’re not much further ahead all things being as they are.

But (and stop me if I’ve mentioned this before), we need a campaign promoting the idea of independence. Despite the best efforts of our grass roots, that’s not happening (and people should stop telling themselves it is, or should at least admit it’s not working fast enough).

The SNP doesn’t seem to want to lead on this, but they don’t seem willing to let anyone else lead on this (witness the takeover of the Yes brand by SNP HQ – and the way it has effectively been mothballed).

What else have we got? We’re standing at a crossroads in British history, as unprecedented turmoil sets in to the British state driven by the fact that the English population (really, this is an England issue) is split among themselves like never before.

So what do we need? What we do not need is another election fought by the SNP as ‘stop Brexit’. We don’t need Sturgeon and Blackford’s total conviction that their first duty is to save the British state (hence them hiding from an election in the same broom closet as Corbyn et al).

Until we start to lead on the case for independence, to fight the long fight of persuading people, we won’t get there. Putting it off for another few years, until the next election, isn’t strategy but fear and incompetence.

The argument that ‘first we must use any strategy to maximise our parliamentary power, only then can we make progress’ is hard to swallow given the lack of progress over the period when the SNP really has dominated. In any case, I’m mistrustful of political strategy which says ‘the most important thing is our jobs’.

So I’d rather the SNP fought on the case for independence and won 80 per cent of the seats than fought for the EU and won 100. We’re going to have to campaign for independence sometime – why so many endless excuses for why now isn’t quite the time?

We have a moment in time when real momentum for real social change is building up. It’s all coalescing around the idea of a Green New Deal. So what do we need? We need to harness the energy of that momentum and merge it with the independence movement.

There are very good reasons for this. All public votes are these days contested on the basis of coalitions of voters. We don’t live in an era of social majorities but of loose coalitions around different issues.

The current independence strategy (as masterminded by Andrew Wilson) is to create a strange hybrid electoral coalition between the independence movement (overwhelmingly centre-left) and the wealthy Scottish establishment (the theory being that the ‘respectable middle classes’ will dutifully follow the establishment).

To achieve this strategy we have an economic pitch based on those on the centre left getting basically nothing other than independence and the establishment get everything they’ve ever wanted – that’s who the Growth Commission was written for.

But there’s a much better coalition. There’s the centre left independence movement, there’s the many people who have been screwed over by the Tory government over the last five years, there’s the economically insecure middle classes freaking out over the implosion of the British state.

The crucial new entry is a whole generation (not just youngsters) who finally get the urgency of the climate crisis. This is indeed the issue of our era and Scotland is ridiculously well placed to take serious action.

But (I can’t begin to emphasise this enough), ten years of deficit reduction means no Green New Deal. Let me be clear – its either Green New Deal or the Growth Commission, it very literally can’t be both since one is about spending and the other is about cutting spending.

So we have this moment and we need a meaningful commitment to a Green New Deal to energise and activate the many people who now see it as a political priority. But we need a serious response.

The Programme for Government was not that. It was endless re-announcement, a lot of grandstanding over nothing and an alarming lurch to the right.

I’ll unpack this all in another column but you can summarise Sturgeon’s announcement as ‘lots of hydrogen busses (£500m) but no hydrogen refuelling infrastructure (£600m) and no hydrogen production (north of £500m)’. I guess they sat down and chose what announcement would get a headline, because it sure isn’t a meaningful integrated plan.

And hardly any of it is new money. Which is why by far the biggest component of Sturgeon’s ‘new deal’ is a mass privatisation of Scotland’s renewable assets. The ‘investment portfolio’ you hear of is nothing more than a fire sale of Scotland’s future to Middle Eastern Sovereign Wealth Funds.

What we need is a mass investment in Scotland by Scotland, developing our own resources in our own hands. We need to do for our renewables industry what Norway did with its oil. Instead the SNP leadership seems intent on repeating what Thatcher did with the oil.

My only sympathy is that the Scottish Parliament doesn’t have anything like the power it needs. So why didn’t Sturgeon stand up and say “this is what we need to do to save Scotland – but we can’t do it without the powers of independence”?

This has the enormous merit of being true, and a great sales pitch. We’re supposed to be making a case for independence, and this is exactly the case we need to make. But Sturgeon seems to be in permanent need of short-term validation, so we get something quite different than we need.

Because there’s a reason we’re not further ahead in the polls, and I’m sorry for repeating this interminably, but it is still true. First, we don’t make the case for independence (at best we’re currently making a case against Westminster, and those are not the same things).

But second, people don’t think we’ve got proper answers to their questions. Watching Derek Mackay greet another round of GERS figures with the intellectual clout and forensic precision of a marshmallow, I do have a little sympathy with the doubters.

I think one of the reasons the SNP leadership hate talking about independence is because they know they’ve got away without answering any questions so far. I mean, I’ve yet to hear any of them actually defend the content of the Growth Commission against cross examination (and I can understand why).

Keith Brown can write articles saying it’s fine, we’ll slash about £15 billion from public services in three years and no-one will notice. But he can only write them in the National and on the basis that there are no questions. Take that to the housing estates, Keith.

A coalition of independence supporters, Green New Dealers, the disillusioned, the insecure and people who want to think of the future as a better place is way more than enough to deliver independence. All the ingredients are there for this.

We have a movement ready for the campaigning needed. We have lots of work done by Common Weal on how to answer all the difficult questions. We have an electoral path to move all of this forward if we are willing to make the issue independence.

We have all the component parts, all the ingredients. They can be summarised as ‘escape and repair’, get our independence and take the climate emergency and social and economic failures of Westminster rule head-on. And yet the official response is to watch them, stare at them, wait for them to coalesce all by themselves.

Above all, what we need is some kind of leadership which appears capable of rising to this historic occasion, which looks like it knows what to do with the raw ingredients of Scotland’s freedom.

I haven’t lost my optimistic mood – it’s not often in life the conditions for the kind of change you want to see fall in your lap like they have for us. It’s just that my optimism is in a lengthy battle with frustration.

Because, if we screw this up, we should never be forgiven. Thankfully, it’s actually harder to screw it up than to nail it. Or it should be.