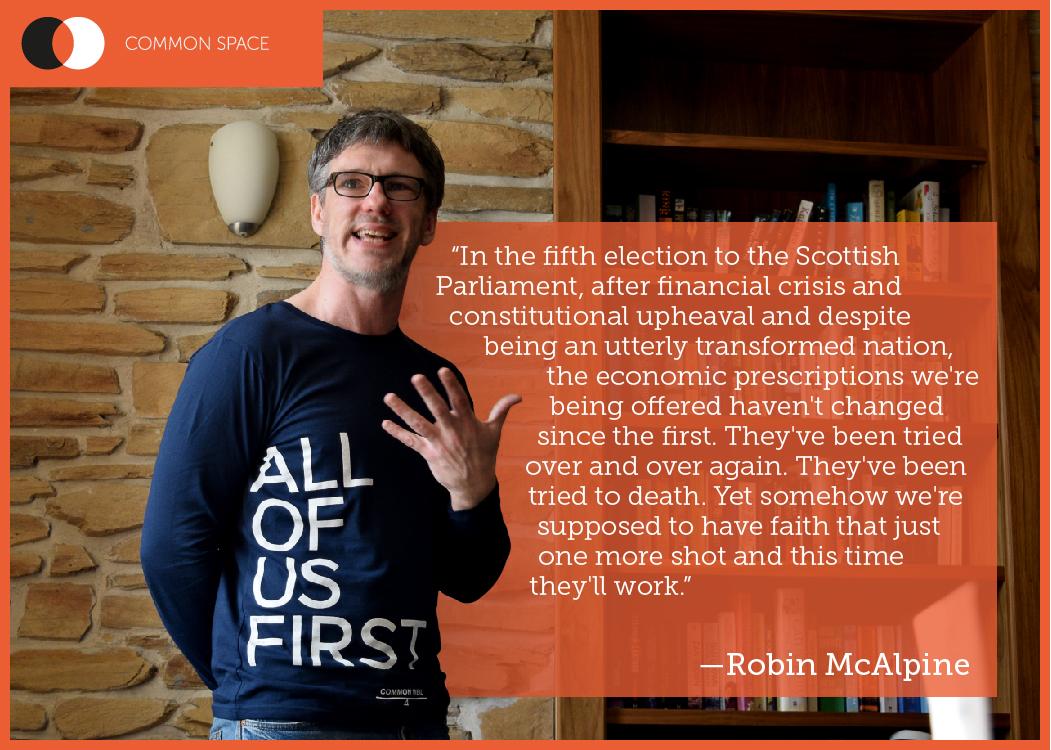 I’VE had a chance to look at all the manifestos now – and I am at least a bit heartened. Across them all there is a generous sprinkling of genuinely good ideas. In childcare, in energy, in food, in local democracy, on land reform and in areas of social justice Scotland is decently served by its political thinking.

And then we come to the economy.

It’s not that all the ideas are bad (though many really are). It’s that even if you took the best bits from all the parties and added them together, I don’t think you’d be able to construct a solid, convincing plan.

With apologies to Prince, we continue to party like its 1999. In the fifth election to the Scottish Parliament, after financial crisis and constitutional upheaval and despite being an utterly transformed nation, the economic prescriptions we’re being offered haven’t changed since the first.

But they won’t – because in every case the analysis is wrong. And if policy ideas spring forth from a bad analysis, there’s little chance the policy will work.

Let’s start with skills-led growth, the assumption that whomever promises the most apprenticeships wins. It assumes that the jobs which aren’t there aren’t there because someone with the skills to fill the job is missing.

Telling kids that if only they train as manufacturing technicians they’ll all find employment is only true if there is more manufacturing taking place. Which there isn’t.

The evidence for this was always thin – when you poke at the real data on so-called skills shortages it is unconvincing because it’s based on self-reporting by business owners and frankly they moan a lot. You try pinning down what jobs are unfilled because of lack of skills and you’ll find it constantly shifts.

The fact is quite simple – skills don’t create jobs but rather it’s the structure of the economy which creates jobs. Telling kids that if only they train as manufacturing technicians they’ll all find employment is only true if there is more manufacturing taking place. Which there isn’t.

And, of course, the big ‘skill’ that still keeps coming up as the solution is ‘entrepreneurship’. But this always seems to mean managerialism or marketing. There seems to be a built-in assumption that what ‘entrepreneurs’ do is business.

They don’t design things, they don’t create things, they don’t build things, they look at a market and try to work out how to take a share of that market from someone else and have it for themselves. Look at the ‘top tier’ of Scotland’s entrepreneurs. Were there no bras before Mone, no tyres before Farmer, no trainers before Hunter?

Or are we talking about hipster dot-com start-ups like Boxeroo which takes groceries out of generic boxes for you and puts them in premium boxes so your kitchen will impress your friends? (Boxeroo doesn’t exist, I made it up – but if I pitched it to Scottish Enterprise they’d probably assign me a grossly overpaid consultant to support my ‘promising start-up’.)

Patiently backing solid business plans for productive businesses which create new markets makes the nation wealthier. Backing people with a plan for how to beat someone else’s business might possibly make that person wealthier. It is usually bad for the overall economy.

The competitiveness-led growth argument is particularly painful. If cutting regulation and taxes was a magical solution to fix the economy, Britain would be absolutely booming. But businesses that create booming economies aren’t interested in marginal tax savings – only the chancers are.

And our utter profligacy in cutting taxes to business seems to be an act of total faith – the SNP manifesto is proud of having saved small businesses PS1bn of business rates. So what did we get for our billion pounds exactly – and what could we have got if we’d spent it on something else?

Then there is ‘big infrastructure-led growth’. This is where governments boost the economy by investing in big national infrastructure projects. Now I’m never going to argue against investment in infrastructure. But this money all goes to multinationals and they immediately take a good chunk of that money out of the economy for their overseas shareholders.

Backing people with a plan for how to beat someone else’s business might possibly make that person wealthier. It is usually bad for the overall economy.

And that is assuming that it’s not being paid via some form of financing scheme which means that the profits taken out of the country can be as big as five times the cost of the infrastructure.

If building bridges was going to save us, it would have happened by now. If more apprenticeships was the answer, young people would be well paid by now. If housebuilding was economic stimulus, Britain would be the world’s best economy.

If cutting taxes was the trick, we’d virtually be utopia. If it was about entrepreneurship education, manufacturing exports would be going through the roof. If any of it worked – any of it – we’d be seeing an increase in balance of trade, productivity, pay rates and a reduction in unemployment and poverty.

(And as an aside, a dispiritingly high proportion of the manifestos talk about better paid jobs and then define these as ‘living wage’ – which means a salary of PS15k. And that’s our ambition for a better-paid economy? Hell’s teeth.)

So when are we going to be honest and admit that none of this worked? It is now coming on for about 15 years of Scottish Enterprise ‘supporting’ the same six industry sectors. Do you know what they are?

The Greens have some analysis about why the economy is failing and deserve credit for that and some good ideas on stimulus – but the party desperately needs to get beyond seeing every solution in the environment and social justice if it is to be taken seriously.

So when are we going to be honest and admit that none of this worked? It is now coming on for about 15 years of Scottish Enterprise ‘supporting’ the same six industry sectors.

As for the rest, they need to rethink (apart from the Tories who like being wrong for the benefit of their rich pals). Surely at some point economic manifestos need to stop being a rehash of the last one? Surely we should be making a more honest assessment of what was tried and whether it worked in any meaningful sense?

And surely we need to ask some much more pertinent questions. Why is productivity so poor? Could it be because ‘entrepreneurship’ has been defined as ‘cutting costs and paying as little tax as possible’? And because we don’t manufacture?

Why is investment so woeful? Is it because instead of investing we’ve encouraged speculation, seeking ways to make short-term profit by using money to take other people’s money rather than by making things? And because no-one will do anything about our awful banking system?

Why does endless talk of innovation not end up in an innovative economy? Might it be because the whole economy is rigged against new entries and any business that develops slowly to be strong and productive?

Why can’t Scottish small businesses get access to domestic markets? Could it be because planning has let overseas multinationals dominate high streets, public procurement has refused to let smaller businesses to the table and distribution systems are now big business monopolies?

Surely at some point economic manifestos need to stop being a rehash of the last one? Surely we should be making a more honest assessment of what was tried and whether it worked in any meaningful sense?

Why have I never in the last 10 years met someone with a good word to say about our economic development agencies? I really do mean more-or-less no-one. I recently spoke to a senior figure who’s solution was “to call in Scottish Enterprise and say, ‘you’re shit, it’s over'”. I might not be quite that blunt – but it’s a better analysis of the problem than ‘continue to…’ – which is as far as the manifestos go.

Why does the word ‘manufacturing’ barely feature? Why do only the Tories mention rural economies (and then of course get everything utterly back to front)? Why could almost all the economic content in all these manifestos be so completely mistaken for what was in their 1999 counterparts?

The problem seems to me to be a combination of a policy vacuum and an over-powerful business lobby.

Scotland needs a new story on the economy and until that story is listened to by politicians we’re going to go round this circle until the wheels fall off. Please don’t let it take a crisis to change our thinking.

But you’d barely know that from the manifestos. Instead they have off-the-peg requests for corporate subsidy neatly provided to them by big commercial lobbyists. I know I mention the proposed cut in Air Passenger Duty in every column, but that’s because it’s totally nuts. If it had to be assessed on its own merits (like our policy papers have to) it would have been binned within minutes.

Scotland needs a new story on the economy and until that story is listened to by politicians we’re going to go round this circle until the wheels fall off. Please don’t let it take a crisis to change our thinking.

A kid in a primary school would tell you that there’s a limit to how many times you can try something and it not work before you need to try something else. It isn’t 1999. Time to move on.