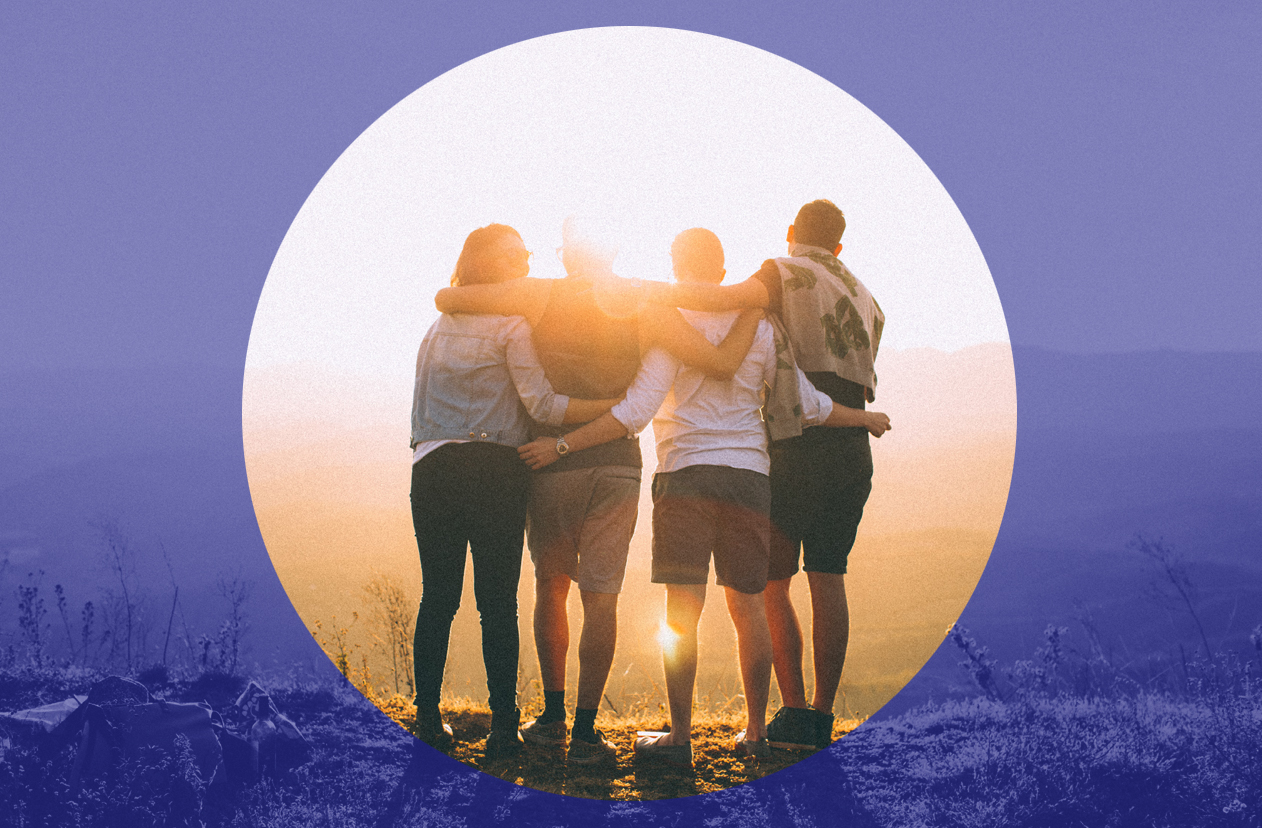 “If politicians start talking about the post-virus priority being to get you all back to the shopping malls, then let’s use that 2021 election to tell them we want a better and more resilient society at the end of this.”

Common Weal Versus the Virus: The virus is exposing the reality of the weaknesses in our economy, society and democracy. Over the last six years Common Weal has been showing that the weaknesses can all be fixed. Over the next few weeks Common Weal Director Robin McAlpine will write a series of columns showing how Common Weal policy is the best way to survive this virus and then rebuild when its over. Today – the resilient society

TODAY, I was going to flesh-out more about what it can be like to live in a post-virus economy – if we do the right things now. But the last couple of days have shown hints of worrying social developments and I think these need to be discussed now.

That doesn’t mean I’m going to reverse my more optimistic turn in these columns but that is because in part I want to explore the ‘resilient society’ and why authoritarianism isn’t the solution – and nor is technocracy nor individualism.

What we are living through will not be the last big shock to take place during the lives of most of us (and certainly anyone who has another decade in them). If geopolitics doesn’t kick them off, the collapse in the global environment will.

So how do we create a society which is resilient in the face of shocks?

How not to do it

First, how not to do it. You do not mutter about cancelling elections fully a year in advance – this is the single most alarming thing I’ve heard so far. You need a VERY good reason to suspend democracy when society faces big and fundamental questions. Since there is a full year to set up electronic voting if need be, we don’t have such a reason.

I suspect there are those who know that May 2021 is the moment when momentum for change will be at its greatest. I suspect they hope that shutting that window and running a sort of low-level establishment coup could dissipate that momentum.

If this chatter continues there must be a swift and decisive response. It cannot be accepted.

And closing down information in a crisis is the worst possible response. I understand that many senior figures want to delay proper scrutiny for as long as they possibly can. Why exactly did Scotland ignore WHO advice for so long and why has our rate of testing been so far behind other advanced nation?

I understand that people are dealing with a crisis and that government capacity is down – but I’ve yet to meet a politician or senior administrator who does not welcome any excuse to undermine Freedom of Information powers. Scrutiny reduces error. It is not a ‘burden’.

And as for changing the evidential basis of the criminal justice system and suspending juries? Again, I’ve spent much of my career near senior managers in the public sector. They all think they are good people (most are) and so they all think that hinderances like oversight and rules just slow them down and are patently unnecessary because of their fundamental goodness.

In my experience, the single most common cause of policy failure (other than outright corruption as per PFI) is putting six technocrats in a room and letting them come to the conclusion that anyone who disagrees with them is obviously wrong.

In the long term, no-one does a better job without scrutiny. No-one.

Resilience lies neither in autocracy or technocracy

There have been two competing theories of leadership in the developed world and both are showing their weaknesses just now.

One is autocracy (which is quite different from populism). It’s the strong man model in which dissent is assumed in its very nature to be mistaken. The right to rule comes from strength. Trump is the model – and it turns out that Covid isn’t a fraud after all.

Autocracy fails because one person does not contain the breadth and diversity to make good decisions. Diversity has been proven beyond doubt to result in better decision-making outcomes. That isn’t a debate but a reality.

The alternative argument is basically technocracy, the slightly ludicrous idea that there is a technical solution to everything so experts should be deified and followed without question. This became one of the weird semi-religious pillars of Remainism.

But technocracy fails for the same reason as autocracy – very often experts hold identical views so no-one says ‘wait a minute…’. Diversity makes good decisions and five finance directors or five scientists is not diversity. For 50 years the world’s dietary advice was based on flat-out bad science that no-one challenged because they took it as ‘truth’ and never asked questions.

Experts see what they’re trained to see. Technocracy has without doubt contributed to the current crisis in the health service. I watched over a decade as ‘Performance Indicators’ distorted the university sector out of all recognition. I’m pretty sure we’ll discover that a health manager’s PI will have made the decision about PPE supplies in the health service ‘all by itself’.

At the start of this crisis, I was told very reliably by a nurse that a manager in her hospital told her to bring in a bra and put it over her face because there were no masks. Had the original decision been taken by a manager – AND a nurse, AND an epidemiologist AND a patient – there would be more masks today.

Science is not policy. Expertise is not enough. There is no ‘right answer’ and even if there is we can’t be sure of it until well after it has to be given. We need the right to choose to ignore advice. Remember, some of the people we’re granting unlimited faith in just now have been trying to push genetically modified crops on us for years (my objection is economic, not scientific).

Good decisions need diversity. At a society level that means a participatory democracy INFORMED BY expertise. Resilience requires that government opens up, not closes down.

This is kind of obvious if you think about it. What falls down quicker under pressure – a chair with four legs or a chair with one leg?

I’m in some degree of awe at the response in my home town of Biggar. My partner is one of 40 people on the support roster (she has a lanyard that let’s her move fairly freely). It’s her afternoon as I write and she’s got a long list of deliveries – mostly food and medicine. As a reminder, every household got a leaflet with a helpline number and so no-one is isolated.

That’s what you can do – virtually overnight – when you have strong local social infrastructure. If you were to read only the media you’d probably conclude that resilience comes from above.

Rubbish – by definition resilience is a whole system which is capable of responding. All of it. It only looks like resilience comes from Scotland’s top because Scotland’s top (over 30 years) has repeatedly stripped the rest of Scotland of power.

We have the most disgraceful local government set-up in the developed world and if you live in a place without my town’s social infrastructure you’re suffering from that failure right at this minute.

It must change this time. Development Councils for Scotland should be an absolute priority once this is done.

News matters too much to leave it to newspapers

Only recently, I wrote a piece on how my sympathies have shifted towards Scotland’s newspapers and then they prove me wrong. They genuinely seem to think they’re celebrities, there to take down those they deem bad. Yet they don’t seem capable of uncovering a story.

As far as I can tell in almost the entire world there is no national leader who is not facing questions about how they’re handling the virus – except in Scotland. Boris Johnson has faced proper scrutiny on why he ignored WHO advice for so long at the start of this crisis. Sturgeon separately and equally also ignored that advice.

But instead the Scottish media is much more focused on proving that people live in houses in what looks like an utterly arbitrary and totally juvenile vendetta (writing which will presumably now result in pictures of my own home being plastered over the internet).

Scotland’s media is failing economically. But it is without question failing journalistically. For precisely the reasons of scrutiny I’ve explained above a media is crucial for a resilient society. When this is done, a national debate must ensue on the state of our journalism.

In the end, resilience is about values

Our social mores, our social values and the way we see ourselves and others is a function of ourselves, our culture and the structures in which we live. Of these (as a sociologist) I’ll tell you that ‘ourselves’ is the lest important bit.

We live in a world onto which a kind of uniform culture has been imposed. Entire super-structures have been built on top of our societies with the primary purpose of making us behave in particular ways. It’s ‘front end’ is advertising, it’s ‘engine’ is free trade.

It’s purpose has been to make us hand over our money as fast as is possible. It is ‘stretch and extract’ fronted by models selling ‘aspiration’. Everything in our society is geared up to make us spend, even when we don’t have money.

(If this lockdown brings an end of celebrity culture, it will almost have been worth it.)

At its heart this has been about how we value each other. Throughout history we tended to value people in our communities based on contribution; the person you respected made a difference to your community. Then more and more you were told to value yourself based on what you consume, what you posses.

This rampant individualism and social planning fragmented community. Your relationship was with Amazon or Apple, not your neighbour.

But Amazon is NOT YOUR FRIEND and most certainly won’t be there to look after you when push comes to shove. There is nothing which creates resilience more than community. It’s the evolutionary imperative which drives us to live together in community. It works.

We have been socially and morally engineered for many, many years now, all to make us to break eye contact with each other and stare mindlessly at a glowing screen selling a myth. We need to engineer things the other way round.

We need to make it easy for people to meet (proper town planning), to participate (proper democracy and community structures), to be active (proper provision of affordable facilities), to value each other (proper regulation of mass advertising) and to be secure in ourselves (proper provision and regulation to prevent the commercial exploitation of citizens).

If, when this is done, you meet a doctor in the street and your first thought is her shoes, or a nurse parks next to you and you comment on his car, you’ve forgotten what we’re learning right now. What counts is what we do, not what we own. A resilient society is not a load of people clambering over each other to get to the top.

London won’t do this so it’s Scotland’s job. If politicians start talking about the post-virus priority being to get you all back to the shopping malls, then let’s use that 2021 election to tell them we want a better and more resilient society at the end of this.

Next up: what can a post-virus economy be like?