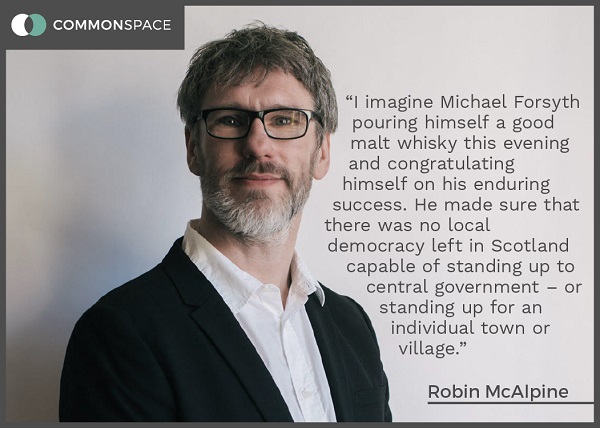 I DON’T think there will be many of you out there who feel immersed in a rich and detailed national debate about our local democracy or spoiled for choice with visions of localism.

So, on the day we vote in Scotland’s local elections, can we ever expect local democracy in Scotland to really matter?

Because while we can expect to see some pretty substantial changes in who is running councils, how much change can we really expect in how councils are run? I’m afraid I’m not all that optimistic.

Read more – Explainer: What are you voting for in the council elections?

Let me begin by saying that Scotland is filled with councillors from all political parties who are deeply committed to doing the best they can for their communities. My dad was a councillor for 18 years and I saw at first hand how conscientious councillors can make a difference.

He was an SNP councillor but worked closely and productively with the Tory councillor from the next ward, with whom he got on well. I bridle at times when I hear a description of local government across Scotland as if it is filled with elected members who are in it for the wrong reasons.

And yet I am deeply, deeply critical of local government in Scotland. For a start, it isn’t anywhere near local. Not even close.

As I’ve pointed out many times, it’s a 45-minute drive for me to get to the closest place I can get access to some of my ‘local’ authority’s services. In any other European nation that would be considered to be the regional tier of government.

Indeed, it’s probably worth just reminding you of precisely how un-local Scotland is. The average number of voters in a European local authority is 5,630. France has the smallest average at 1,770. Somewhere like Germany has 7,080 citizens per local authority.

In Scotland, the average local authority is 2,461 square kilometres.

Read more – Caitlin Logan: Why you really should vote in those boring old council elections

Every single system of local government in the whole of Europe has at least two tiers, one regional and then another which is properly local. Well, except one nation which has a unitary ‘local’ government system. And barring England, that nation is also the one with the lowest turnout in local elections.

And yet you try and get anyone with the power to do anything about this to take the issue seriously for even a minute or two and you’re doing well. I’ve spoken to politicians from different parties on this and almost with one voice they’ll tell you “no-one cares – why would we take the risk of actually doing something?”.

This won’t change after this election – Scotland will continue to have almost certainly the worst system of local democracy in the developed world (a system, it is worth remembering, that was devised by Michael Forsyth as a form of punishment for Scotland for messing up his Poll Tax).

But structure is far from the only problem in Scottish local government. It is a system with very little real accountability – as the local press gradually dies in most parts of Scotland and as a resource-strapped national press pays less and less attention to local government, who is watching our councillors?

As I mentioned last week, in at least some parts of Scotland Labour has done much to entrench a sense of self-serving cynicism in local government.

The days in which outright corruption was often the norm (jobs for the boys, contracts for the pals, infrastructure for favoured communities and hee haw for others) probably came to an end with the Monklands scandal in the mid-1990s. But some of the attitudes that went along with it remain.

Far too often, local government in Scotland has not been about public service but rather tribal power games. And it’s not just Labour – if I was to voice my opinion on Scotland’s most dysfunctional local administration right now it’s not a shoe-in it would be Labour majority.

After this election Scotland will continue to have almost certainly the worst system of local democracy in the developed world.

Because local democracy in Scotland isn’t really something you can hold to account (I can effectively sack one councillor with my vote, which would change nothing much overall), it is played not like a democracy but like a game of thrones.

Then again, if it was all the fault of the individuals involved you’d expect to see some places doing amazing things, and I know of local authorities who are genuinely trying.

I was invited to meet a group of councillors from a minority administration who wanted to talk about what kinds of Common Weal policies might make for an agenda in their local area. The kinds of things they were talking about were genuinely exciting.

Another feature in the Forsyth-designed local government system was that it was mainly meant to be run along the lines of ‘new public management’. That meant that a market-based, pseudo-scientific set of guidelines would leave lawyers and finance directors running local authorities in partnership with the private sector.

Far too often, local government in Scotland has not been about public service but rather tribal power games.

The role of councillors was seen as little more than democratic decoration. To be clear about this, the unelected chief executive has a chief lawyer who decides what can and can’t be done. The democratically elected council does not have a lawyer or a budget for legal advice to challenge the view of the chief executive’s lawyer.

And in my experience the entire bureaucracy of local government in Scotland is structurally designed to be risk averse. It is seldom that staff are rewarded for big thinking. I know plenty of people who work in local government; frustration is a fundamental part of the job.

And that is where we are. We don’t have local democracy in Scotland – it would be more accurate to describe the system as regional administrative units with an elected advisory board. But no-one seems to care enough to do anything about it.

This matters particularly for anywhere in Scotland that isn’t a city. A town like, say, Kirkaldy or Hawick or Aviemore or Kilmarnock, would be a comparatively powerful and autonomous unit of government if it was in any other country in Europe.

It could decide on its own planning and housing needs, raise its own taxes, design and build its own infrastructure, make its own transport arrangements, have its own economic development strategies and so on.

There will be change at this election, but that change will not lead to fundamental reform of a fundamentally broken system.

In Scotland not one of these towns could do so much as screw a plaque on a wall without someone else’s permission.

And this culture of powerlessness, lack of democratic control, unresponsiveness to localities, petty tribalism and low expectations have been so ingrained that we think this is normal – even when we are very measurably at the very extreme of not normal.

I imagine Michael Forsyth pouring himself a good malt whisky this evening and congratulating himself on his enduring success. He made sure that there was no local democracy left in Scotland capable of standing up to central government – or standing up for an individual town or village.

While the origin of the quote may be debated, no truer phrase ever emerged from a human mouth than ‘culture eats strategy for breakfast’.

What little discussion of real ideas has emerged in this local election campaign has contained some real hope. I’m thinking of Labour’s interest in pursuing a pilot Citizen’s Income in Fife or the kinds of ideas for Glasgow the SNP has talked about.

We’re left having to hope that somehow the strategies of incoming administrations can defeat the ingrained culture of our local authorities.

There will be change at this election, but that change will not lead to fundamental reform of a fundamentally broken system. And so we’re left having to hope that somehow the strategies of incoming administrations can defeat the ingrained culture of our local authorities.

Simply by introducing an extra tier of local government at a town and village level (which doesn’t require reorganisation – officers can simply work for two councils, one regional, one local) and giving them serious power, we could force change to happen. But despite an active Our Democracy campaign, there is simply no political will.