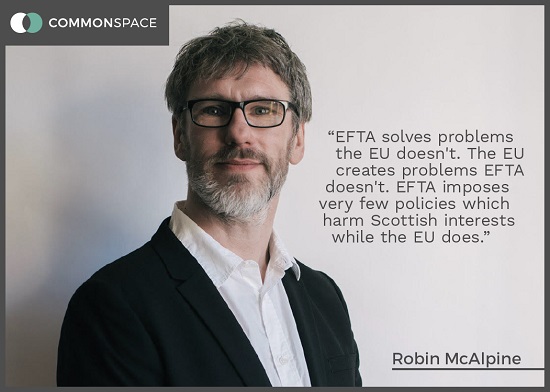 SINCE the Brexit vote, my view on where we were going to go next has been consistent and unwavering. At the same time, our White Paper Project work on some of the more difficult policy issues around Scottish independence started to suggest quite a specific direction.

And separately from both, my reading of polling data and trends also suggested a specific direction we should consider.

All three lines of thinking, independently and for different reasons, have arrived at exactly the same place. But I’ve barely mentioned it out loud because I didn’t want to be divisive.

It could solve our trade problems, our Brexit problems, our ‘Europe’s bad for Scottish fishing and agriculture’ problems and more.

Now I learn from a few sources that, in fact, a number of senior people inside the SNP have been going through much the same thinking process as me and ended up in the same place. So I think it really is time to say it out loud.

That place is EFTA [European Free Trade Association]. It could solve our trade problems, our Brexit problems, our ‘Europe’s bad for Scottish fishing and agriculture’ problems and more. If more people understood the options better, I think it would be really quite popular. So let’s have an open-minded discussion.

For a little background, at the last referendum I favoured the EU position over EFTA, but mainly because I just didn’t really want to rock the boat on an issue I felt ambivalent about. And despite my major reservations about the EU, I voted Remain.

But a lot has changed. Let’s start with my assumption on Scotland’s post-Brexit trajectory. Unless we now manage to hold and win a referendum on Scottish independence, negotiate a full date for independence and terms of separation, create a viable functioning nation state that meets EU criteria and then negotiate terms of membership of the EU all within the next two years, we’re out of the EU.

Some of you will instinctively rebel against this and feel there is a way, some way, that Scotland could have seamless EU membership. There isn’t.

If more people understood the options better, I think it would be really quite popular. So let’s have an open-minded discussion.

So that road leads to EFTA, even if not as a final destination. But when you look at campaign tactics, this is actually rather attractive. We’re definitely losing people who previously supported independence but post-Brexit don’t. They may not be enormous in number (one in eight independence supporters perhaps) and some may come back.

But as we may be rushing into a referendum it could be very close and we might need every vote we can get. Admitting that on independence Scotland will be in EFTA and that we would then have to choose a route forward from there offers reassurance that Eurosceptics would still have some degree of agency on the EU issue if they vote for independence.

An option to nail home this message to waverers is floated in the first draft of our White Paper. It would involve resolving the EU question as part of a major three-year participative constitution-building process, possibly with a confirmation referendum at the end.

But it’s when you come to some serious policy issues that the case for EFTA begins to really solidify.

The best case scenario is that somehow we were able to join EFTA before being part of a complete UK exit.

First of all, I want to make a plea to the movement to take tricky issues more seriously – borders, trade, tariffs and so on. These are real issues that won’t disappear through the power of rhetoric.

So if you think that a bit of judicial picking-apart of the export figures will make the whole ‘England is your biggest export destination’ stuff go away, you need to recalibrate your thinking. There are certainly big question marks (data in Scotland is so woeful on so many things that it is hard to prove something one way or the other…).

And sure, there are aspects of the export figures which are absolutely not what you’d generally think ‘exports’ are. For example, out of every pound of exports about 15p is the export of electricity. Somehow I doubt the UK will be putting a tariff on that given its energy security problems.

And then another large amount is money transfers like English mortgage holders paying their mortgage to banks registered in Scotland. Nevertheless, exports to the UK really are much more important to us at the moment than exports to the EU and we need to take that seriously.

There is a very straightforward solution to this which solves all these problems and that’s to agree a British Isles Trade Zone. The only way that there would ever be tariffs on cross-border trade would be either if the UK insisted (and it exports more to us than we do to it so that would make no sense other than more pointless Project Fear nonsense) or if Scotland was compelled.

The worst case scenario is that we leave the EU as part of the UK, join EFTA as a holding position and then negotiate EU membership from there.

And Scotland cannot be compelled to impose tariffs unless it is inside a customs union (the free market is anyone in the EU trading with each other, the customs union is the line around the EU which defines how EU members trade with anyone outside the EU).

Conveniently, EFTA is precisely inside the single market but outside the customs union. There is a fee to pay, but that fee gives all the rights of the single market (including free movement of people). But EFTA members are completely free to agree their own trade deals with anyone outside the EU.

In fact, EFTA already has 27 major international trade agreements and Scotland would inherit all of these upon membership. It also seems likely to me that EFTA will end up with a tariff-free trade agreement with the UK (EFTA has no incentive to ‘punish’ the UK for leaving the EU and will be keen for free market access, and right now the UK would sign a trade deal with Darth Vader if it was on the table).

So it’s likely that EFTA would solve our rest-of-UK trade problem for us. And if it didn’t, we’d be entirely free to negotiate a deal ourselves.

Now, EU nation states do have individual external trade agreements in special cases and a British Isles Trade Zone could be agreed from inside EU membership – but the EU (through each of its individual nation states) would have a veto. The process would be much more uncertain and much messier and more time-consuming.

I want to make a plea to the movement to take tricky issues more seriously – borders, trade, tariffs and so on. These are real issues that won’t disappear through the power of rhetoric.

It won’t definitely solve all our campaigning problems – the UK could refuse an EFTA deal and take the same petty line it did over Sterling, claiming it won’t make a deal even though it will. But at least we’re not giving Spain a veto as well.

In addition (and it really is time for the more evangelical pro-EU people to start to engage seriously with policy problems that result from the EU), we’d have single market access but be outside the Common Agriculture and Fisheries Policies. That would be hugely advantageous for Scotland.

(In fact it’s a bit of a bug bear of mine that in Scotland we seem to have wholly given up on any critical assessment of the EU. For example, I’d have thought that ending CAP would be seen by the Greens as an enormous win.)

The arguments against EFTA fall into two categories. One is the ‘seat at the table’ argument. For me that is an attractive argument if you personally want to fill that seat, get your picture taken with all the other leaders and enjoy all of the pomp and circumstance that goes along with it.

But the idea that it gives much real power? How did that work out for Greece? And since in EFTA we’d be exempt from most of the policy anyway it wouldn’t matter.

I’ve tried not to write or talk about this but it has never been far from my mind in the last seven months. Now that I know that other, senior figures inside the SNP and the wider movement are drawing similar conclusions, I think it is time we get this debate started properly.

The other is about dedication to the ‘European Project’. I’ve met a good sprinkling of people who believe fundamentally in the pan-European project and believe that all kinds of drawbacks and downsides are worth it to protect that project.

Here I don’t have many arguments. I used to believe in the project when it was largely a social one. Now it has become a corporate project, I feel little commitment. The whole project is in crisis anyway and may not last. And with varying forms of extremist government in Poland, Hungary and Croatia and with France, Austria, Holland and others all being nip-and-tuck close to the same thing, it’s not anything like as attractive a project as it was.

I’ve tried not to write or talk about this but it has never been far from my mind in the last seven months. Now that I know that other, senior figures inside the SNP and the wider movement are drawing similar conclusions, I think it is time we get this debate started properly.

We’ve had seven months of panglossian veneration of the EU as Scotland’s only bridge into civilisation. It’s been a shallow and not particularly well-informed discussion so far.

We’ve had seven months of panglossian veneration of the EU as Scotland’s only bridge into civilisation. It’s been a shallow and not particularly well-informed discussion so far.

The independence movement knows what happens when you go into a campaign without properly debating and testing propositions. We have the time to have the debate and the testing now. Taking a little time seriously to consider EFTA as a good option for Scotland does not make you Nigel Farage. Go and have a wee read and see what you think.