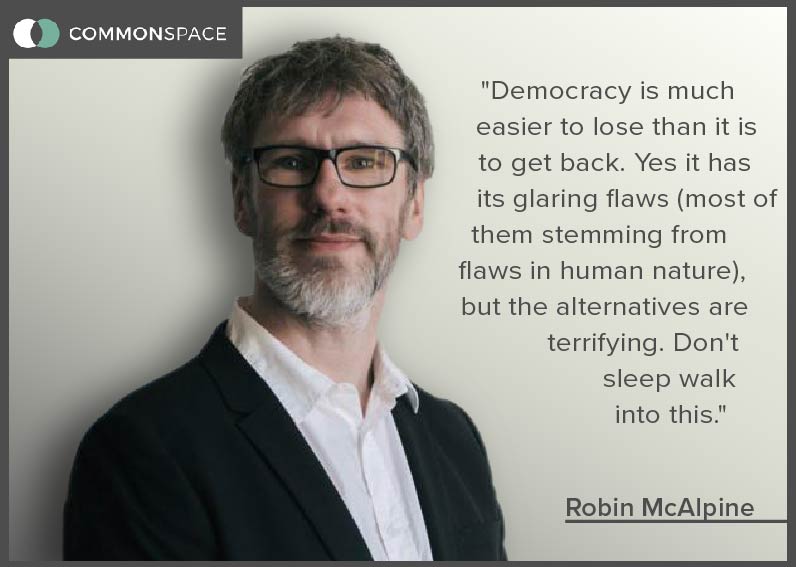 Common Weal director Robin McAlpine says there seems to be declining support for democracy everywhere he turns but it needs to be defended and rebooted, because the alternative is terrifying

I HAVE been worrying about the future of democracy this week – but my worries don’t start in Brazil.

They start among Scotland’s progressives. This week Common Weal launched a proposal for a new system of local democracy in Scotland which was developed through long conversations with a lot of organisations and individuals.

These are people working in or near local government or heavily involved in community development or regeneration. They are not Latin American strongmen or Middle Eastern autocrats but work with the most deprived communities, helping them to defend themselves against poverty and decline.

And yet many seemed to need a lot of reassurance that democracy is a meaningful solution to anything. There was disillusionment, doubt. They could see more problems than opportunities.

There is a widespread view that people working outside of democracy achieve more than those working through it, that the best things happening happen because people self-organise with no-one’s permission.

They’re not exactly wrong – many of the best things happening in Scotland’s communities really do happen despite the existing local authorities rather than because of them. But I would have thought this is exactly the reason to give those inspirational community activists real power.

I simply didn’t expect that I would need to make the fundamental case for why democracy is a good thing, why voluntarism and charity have an important role but can’t be the solution.

I get a similar sensation quite often when progressives talk. One of the current lines I hear a lot is that in some way we need to protect climate change action from democracy, that there must be some kind of global Leviathan imposing sanity on a world gone mad.

Don’t get me wrong; I really do believe that the recent IPCC report should be a turning point – as should the news that we’ve exterminated 60 per cent of all mammals since the 1970s or that in Europe we’ve wiped out 75 per cent of insects over the same period.

Humans really are destroying everything – but is a global ‘dictatorship of scientists’ really the way to go? If they conclude the only sensible course of action is depopulation through a selective cull of humans?

Don’t say ‘that couldn’t happen’. Human history has been filled with just exactly that kind of human behaviour. It is democracy which has helped keep it in check.

And anyway, where do we get to if what we’re saying is that democracy is the problem and autocratic elite rule is the alternative? If we decide that all the policy powers needed to achieve climate sanity (which is most of them) should be taken out of the democratic realm, what is next?

For the last 40 years this model has been tried. It’s the basis of neoliberal globalisation. Leaders believed so totally and purely in free market economics not as an ideology but a natural science that it was certain that all trade laws should be removed from the democratic control of nation states.

Look where that got us – and if in doubt, cross reference the neoliberal timescale with the mass extinction dates above.

READ MORE – Analysis: Pete Wishart is right – the danger of a #PeoplesVote to Scottish democracy is real

In recent times there was one group in Scotland that could reliably be trusted to make the case for democracy, and that was the independence movement. The right for the people of Scotland to choose their own future was hard-wired into that movement. It was democratic at heart.

Is that still the case for all its constituent parts? Well not as much as it was. The idea of some ‘alternative’ route to independence not involving a clear democratic mandate is raised much more than I am personally comfortable with.

At times the ‘dissolve the union’ slogan sounds like a legalistic approach and not a democratic one. And one indy blogger not known for temperate responses actually tweeted that our local democracy proposals pose “grave dangers in creating local power bases from which British Unionists can undermine the Scottish Parliament”.

Really? You think democracy is a Game of Thrones that you will only support while your king wears the crown? Presumably this person would abolish the Scottish Parliament if it was at risk of ‘falling into the wrong hands’. This is beyond nuts.

READ MORE – Analysis: All eyes on Brexit, but the EU ship is hitting the rocks

In parallel to this the ‘centrist’ Remain crowd have linked arms to make sure that referendums are never held in Britain again – almost explicitly because the public can just about be trusted to select leaders from among a professional political class but must never be allowed to decide on specific political issues because they simply don’t have the brain capacity.

(The way they contrast the ‘People’s Vote’ to what they seem to be only inches away from rebranding as the 2016 ‘Battery Chicken Lottery’ speaks volumes.)

Then there’s Trump and Orban and Le Penn and Wilders – all the way to the quite petrifying Bolsonaro in Brazil who is frankly off the scale. So can any of us be surprised that, in some Western countries, fewer than half of those under the age of 30 still think that democracy is the preferable system of government?

Well, I am. I am startled. I can hardly believe that I am living through an era in which seeing democracy as our future is up for debate.

READ MORE – John Rogers: Do we still need to learn about democracy?

I’m startled and I’m furious. I’m furious at those who have so misused democracy. I’m sick of those who have seen it as an insider game used to make a small group of people hugely wealthy. I’m angry at the noses in the troughs, the certainty that those giving out the tax breaks and PFI contracts and bank bailouts will get their reward on retirement (yes, I’m looking at you Lord Darling).

I’m sick of the closed, arrogant certainties of the political classes. I’ve had more than enough of the blatant manipulation of democracy which passes for a ‘free press’ in Britain (and the fact that they blame Russia for political meddling is absolutely laughable in comparison).

I’ve also had it with more or less anyone who thinks that democracy is only acceptable when it suits their goals. That indy tweeter I mentioned above may not give a damn about his own town or how it is governed, seeing the world through conspiracy theories. I stand behind the many great people who are working to change the places they live and are crying out for the power to do it.

But I most certainly have not ‘had it’ with democracy, and I write as someone whose hopes have been dashed by democracy more times than they’ve been realised. I take that on the chin; if me and people like me have failed to persuade the public, that is on us, not on democracy.

And for those of you who wonder if post-democracy might be an idea, get yourselves to a cinema to see Mike Leigh’s Peterloo and remind yourself what life is like when you have no right to a voice in your society. They shoot you, you die, they go and have a cup of tea.

Democracy is much easier to lose than it is to get back. Yes it has it’s glaring flaws (most of them stemming from flaws in human nature), but the alternatives are terrifying.

Don’t sleep walk into this. Try speaking the principle out loud – you and those around you have a right to a say in how you are governed. In your town, village, city community. In your region. In your country. With multinational democratic cooperation. A future without your consent, without your voice, is no future for you or your children.

So perhaps our proposals to repair Scotland’s non-local democracy arrives at the wrong time. Perhaps we should have called for some centralised autocrat to run your town from a hundred miles away. Perhaps we’re on the wrong side of history with our ‘power to the people’ hopes.

REPORT: Development Councils – A Proposal For A New System Of Local Democracy In Scotland

If so, I doubt I’m going to want much to do with that future history as it unfolds. But I don’t think the people of Scotland are quite as cynical about their ability to make their own decisions as those who comment on them. Fundamentally, I trust Scotland’s people. It’s that simple.

Back a new system of local democracy for Scotland. Back democracy wherever you see it and argue for it where it doesn’t exist. Do not let your view become jaundiced. Never walk away from what you can’t accept; change it. Fight for your right to be a citizen and not a subject.

Do these things or you might as well wind the chains round your own limbs and drop to your knees where you now stand.