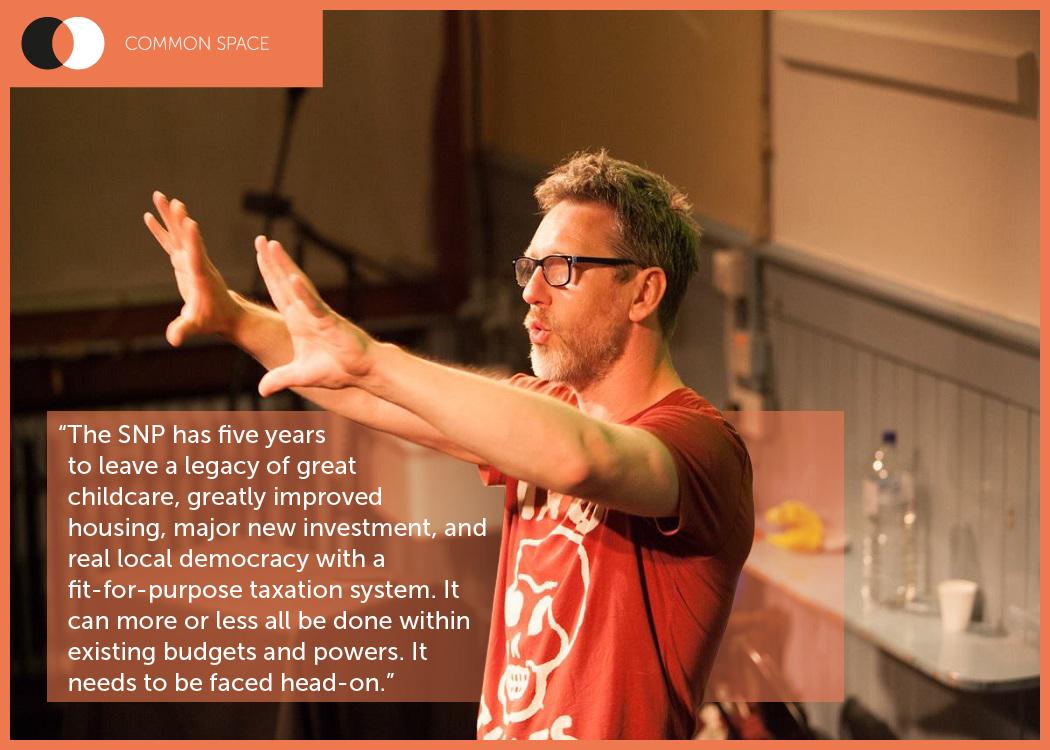 TONY BLAIR ruined manifestos. In the mid-1990s as New Labour gave the appearance of giving up politics in favour of marketing, nothing suffered more than big statements of what political change should look like.

Rather than explain what a better society should BE like, New Labour focussed on what it should FEEL like. So big transformational programmes of policy were replaced with lots of photos of smiling middle-class (and a couple of affluent working class) people of a diverse racial background.

Here’s my fear – for more than a decade of Scottish politics both Labour and the SNP have tried to avoid doing anything much more than managing things better.

And that was all you really needed to know. This was the 1990s. You were supposed to be away snowboarding in your Gap cargo ‘pants’. Politics was necessary but boring. Tony was a ‘pretty decent sort of guy’ and you could leave the thinking up to him.

I remember joking at the time that as each manifesto became more ‘aspirational’ and vaguer, if he’d made it to another couple of elections there would be no sentences in the manifesto at all, just smiling pictures and positive-sounding adjectives.

What’s a bit strange is that I’m almost hoping that this is what we get in the manifestos for Holyrood – because I’m a bit worried about what they will commit the political parties to if they don’t.

This worry can be traced back to Jack McConnell. After Henry McLeish made a valiant but chaotic attempt to do something genuinely radical in Scotland, McConnell came in and made a virtue of ‘doing less’. ‘Competence’ and ‘careful management’ became the order of the day.

The SNP rather followed suit. Its 2007 manifesto contained some reasonably big ideas but gave the impression of being a circular from a bank – ‘reliable’, ‘sure-footed’, ‘competent’. By 2011 the manifesto was very Blair in its non-committal nature.

Sure – it worked. And yes, despite the opposition rhetoric, the SNP has been pretty sure-footed and competent. But even for the most loyal of SNP supporters, could you really claim these were manifestos that changed Scotland (other than the sentence that promised an independence referendum)?

But here’s my fear – for more than a decade of Scottish politics both Labour and the SNP have tried to avoid doing anything much more than managing things better. And I’m afraid that it has meant not much more than patching things up – no economic or social issue has been viewed as so big that it can’t be solved by tweaking what is already there. It was the era of ‘tweakocracy’, government through incremental change.

I’m afraid that it has meant not much more than patching things up – no economic or social issue has been viewed as so big that it can’t be solved by tweaking what is already there.

At this point I want to make a strong caveat – I am not a fan of perpetual revolution. For many years I worked closely with government on policy and the constant assumption that another tweak to something working reasonably well would make it work even better often did little more than divert people from doing what they were doing to relearning systems and ticking boxes.

Ironically, this was one of Tony Blair’s biggest flaws – no public service was good enough that another market reform (or ‘modernisation’) wouldn’t make it more like business. Everything was a flurry of new targets, buzzwords and initiatives.

If this is what we get in the 2016 manifestos, I worry. It will probably mean more initiatives like national testing for primary school children – a managerial policy for managerial people supported by barely an educationalist in the country. More paperwork, more people running around with more clipboards.

Worse, while we’re busy tweaking the life out of things that are working pretty well the temptation will be to believe that we can tweak life into things that are fundamentally broken. Sometimes you need to recognise that tasks are big, not incremental.

A prime example of that is the Council Tax. It was a tax system designed to be a bit more palatable than the Poll Tax that has ossified into a mess. There are more households in Scotland in the wrong bands than there are in the right bands. Everything is based on valuations of houses in 1992.

If this is what we get in the 2016 manifestos, I worry. It will probably mean more initiatives like national testing for primary school children.

The system relies on periodic revaluations which no-one will do because its easier to pretend that it’s still 1992 than upset anyone with fairness (expensive housing have risen in price more than modest housing so it’s the affluent who are undertaxed and the less affluent who are overtaxed).

And it dodges the big tax issue of our era in Scotland – the taxation of land. A couple of extra bands will do nothing to fix any of this. A big expensive and temporary housing revaluation in the era of Zoopla is one of those ‘fax me your email’ moments.

So a tweak might get you through the election, the first year of government even. Then, in five years when you’re up for re-election, the system will be pretty well as broken as it started and all you have done is shove the problem onto another generation.

Or take the genuinely transformative proposal to increase free childcare to 30 hours a week. At first glance you could take the minimal chance and throw the money at the existing local authority provision.

Worse, while we’re busy tweaking the life out of things that are working pretty well the temptation will be to believe that we can tweak life into things that are fundamentally broken.

But here’s the thing – local authorities will deliver the statutory minimum. It is almost certain that they won’t offer the 8am to 6pm service (with additional charging for additional hours) which the system needs.

As the money gets lost in their faltering budgets, an investment easily big enough to create a nationwide network of some of the best childcare facilities in Europe will turn into a patch-up job on the insufficient infrastructure which is already not good enough. And will they really invest all the money in the high quality training needed?

If this is what happens, in five years’ time a parent working full time will effectively get zero hours of free childcare – unless they can leave work when the free entitlement ends, move their child to a private provider each day and get back to work before coming home to pick up the child again.

And that’s assuming they can arrange the start of their working day to fit in with the starting hours of what their local authority decides is the statutory minimum.

So this kind of patch job might avoid conflict with budget-hungry local authorities and save the effort of setting up a proper national system. But there is a real risk that by the next election a commitment that should be a landmark will be a running joke among parents – and the next manifesto will have an entire section dedicated to tweaking that failing system a bit more.

A prime example of that is the Council Tax. It was a tax system designed to be a bit more palatable than the Poll Tax that has ossified into a mess.

Until we do something about our lack of proper local democracy, bad local governance and widespread public cynicism will remain the norm. If we think we can solve the housing mess by letting the same private developers get access to more public land, we’re not paying attention.

Scotland has a public realm in which an awful lot is right. Sure, we should keep improving it, but not by behaving as if it is in permanent need of being fixed. Meanwhile, years of avoidance behaviour has left a serious backlog of other major issues which will need to be addressed one day.

This future can’t be tweaked into existence. It needs to be faced head-on.

The SNP is almost certainly going to win this election with an overall majority – and broadly deserves to. It can decide that this is the generation which faces up to these big tasks. It has five years to leave a legacy of great childcare, greatly improved housing, major new investment, and real local democracy with a fit-for-purpose taxation system.

It can more or less all be done within existing budgets and powers. But this future can’t be tweaked into existence. It needs to be faced head-on.

Perhaps this is the manifesto we’ll get (I’ve seen bits of the Greens’ manifesto and it looks very promising). But when an influential SNP insider is writing articles in the national media suggesting that Scotland’s future is ‘foreign direct investment’ (like it’s still the early 1970s, China doesn’t have universities and the world economy isn’t in turmoil), I get nervous.

So if the SNP isn’t going to risk its electoral lead by putting too much bold commitment in its manifesto (and I can very well understand that temptation), my hope is that it will at least leave enough wriggle-room to allow it to be much bolder when back in government.

Of course I want a big, bold, generation-defining manifesto from the SNP. It’s in my nature. But if I can’t have it, I’d much rather have smiley pictures of hard-working Scots which could leave the door open for change than a lengthy and detailed proposal for more tweakocracy.

Because in the end, I greatly worry that Scotland won’t cope well with another false dawn.