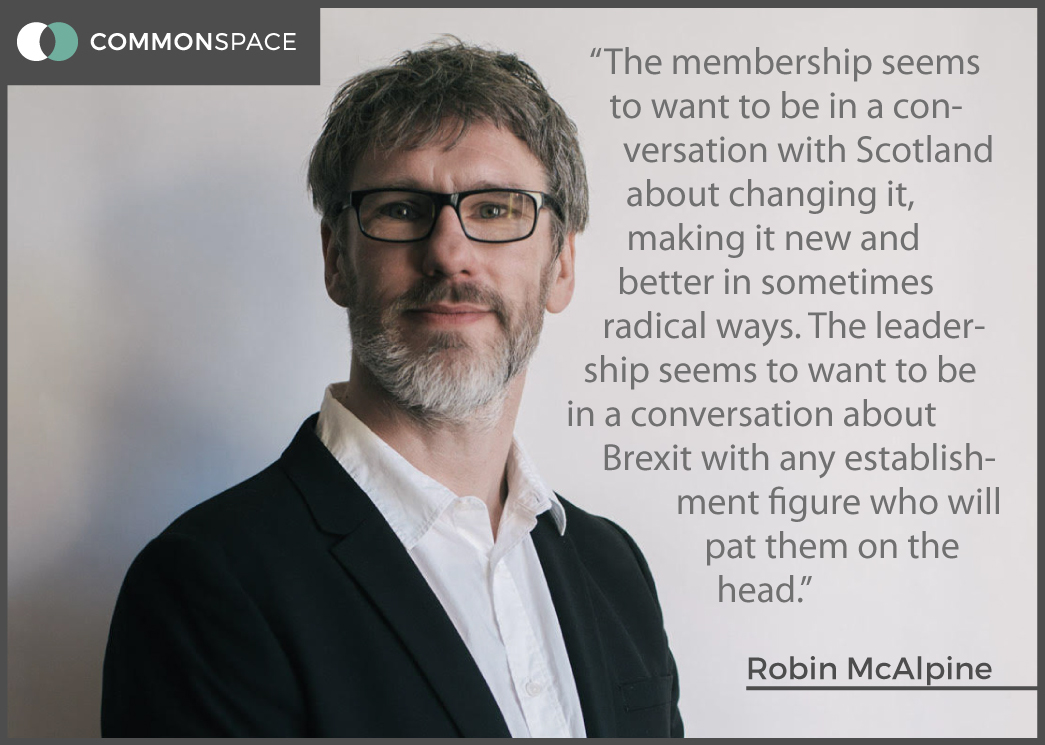 Ahead of the SNP’s annual conference, Common Weal director Robin McAlpine argues that waiting for the SNP leadership to take the initiative is likely to only lead to more despondency – the members have to make it happen

I WAS at a conference this week where an important and influential group in Scotland debated the future.

One thing stuck out for me – that a number of those who attended appeared to think that the Growth Commission report is now the blueprint for public policy in Scotland. Or to put it another way, they seemed to think that the Scottish Government had taken a decisive and permanent lurch to the neoliberal right.

Well, why wouldn’t they? There was a massive PR launch (by a lobbying company and not the SNP or the government – but who knows that?). And then Government ministers and senior party figures spent days defending it against widespread attack.

Despite a few valiant souls trying to give the impression that the party membership is still trying to shape the Growth Commission into something the party can embrace, I’m told reliably that this isn’t true.

A number of senior and well-connected activists in the party (some far from being on the radical left) tell me that if a motion to reject the whole Growth Commission package was put to party conference it would pass overwhelmingly.

But the chance to put this whole sorry affair behind us is being denied to party members. This unloved report will limp on until at least next spring. The longer it does, the more the idea that the SNP is deliberately repositioning itself as a right-of-centre party will spread and establish itself.

It’s not like there’s no other reason to get that impression if you’re looking from the outside. A large part of the government’s desperate PR exercise to save its primary school testing regime was the line ‘Tories – why can’t you stop being hypocrites, start being proper Tories and join with us to get this Tory policy through’.

Meanwhile those of us working on food, agriculture and rural policy wouldn’t mistake the direction being set out by Fergus Ewing as progressive or even what you’d call centre ground politics.

Elsewhere, tiredness is having its effect. This is a government which has been in power for a long time. Eventually people run out of ideas – so where they subsequently import ideas from is really important.

Slightly alarmingly, if you talk to most of the organisations in Scotland that you’d think of as pushing for a more progressive future, few if any of them will tell you (in private) that they feel particularly linked to or networked with this government.

And so the vacuum left is filled with those who have the resources to push ideas into government – the lobbyists. From hesitance on land reform to the kind of Osborne-lite housing policy to a lack of will to challenge a privatised transport model – bold is out, Westminster-conventional is in.

Or worse. Can someone explain to me why Nicola Sturgeon is so relentless in her fight to stop her own council leaders introducing the eminently sensible tourism tax? Is no-one explaining to her that it makes her look like a mouthpiece for big business?

I spoke to another delegate from last year’s conference, again not what you’d call radical left. Talking about Sturgeon’s speech, she said to me “if all she can come up with to persuade me we’re a progressive party is having abolished tuition fees ten years ago and still being against nuclear weapons, I think I’ll cry”.

(And like the NATO U-turn, how confident can we be on the anti-nuclear front? All the whispers from the SNP’s Westminster defence team are about how we’d probably have to let the UK keep nukes in Scotland for 20 years after independence.)

You may wish to throw back at me examples of good and progressive things that are happening. Childcare is significant; the National Investment Bank is of course Common Weal’s big hope; there’re no private companies doing benefits assessments.

Great – I’m the first to welcome these things. You might also try to have a shot at persuading me the tax package is radical too. Actually, it looked to me like the least you could do while claiming that you did something. And don’t start me on the failure to ditch the Council Tax and do something much better…

It’s just that the only people I’ve heard trying to suggest that the SNP remains at the forefront of progressive politics comes from party loyalists. And honestly, they don’t really look convinced to me.

On independence, I am certain that the party is paralysed. I’ve heard senior figures say the SNP makes the case for independence ‘every day’. This is total gibberish and everyone knows it.

When activists get shirty about the total lack of real campaigning, a ‘day of action’ is arranged to keep them busy – and out the way. If you want to know how seriously the leadership really take these initiatives it is sobering to remind yourself that the 2016 ‘biggest listening event ever’ produced many box-fulls of results which remain unopened (presumably binned by now).

I get invited to a lot of SNP branch meetings and to a lot of Yes group meetings which are dominated by party members. The party membership is famously loyal in public. That does not mean they are idiots. In a private conversation they regularly make much stronger criticisms and with much more anger than I ever would.

What have they got to be happy about? As someone put it to me at one of those meetings: ‘the high heid yins come to visit and tell us that we should be ecstatic that it looks like they’re going to keep their high-pay jobs for the foreseeable future.’

READ MORE: Labour and Tories slammed for adoption of common front to bar an independence referendum

The next bit is unprintable – but suffice to say that person didn’t join the party to keep apparatchiks in well-paid employment.

What has saved the SNP is the abject failure of Scottish Labour to get any kind of an act together. The SNP gets worse but Scottish Labour gets worser. And the leadership of the Scottish Greens seem too comfortable with a kind of niche, self-righteous identity politics to make any kind of serious challenge.

This is a travesty of what the SNP is. Taken in total it is an overwhelmingly, unashamedly left-of-centre (and sometimes more radical) political party with a fundamental belief in democracy – other than for itself.

From Cabinet down there is talent all over the party, serious thinkers, people with substantial experience in lots of walks of life. For reasons which are beyond me the leadership seems to think that this talent is a problem to be managed, a threat to be controlled.

That’s why, under this regime, this party with so much resource, so much capacity, so much drive, so many good people – it somehow manages to be a lot less than the sum of its parts.

I’ve spoken to many of the same people year after year at and after party conferences. Some of these are people I’ve known since childhood. Four years ago they thought they were about to change Scotland – radically.

Three years ago they thought that actually the radical plan was still there but was a strategically-guarded secret. Two years ago they were beginning to fear the Emperor might be looking a bit bare about the bum. Last year there were strong hints of despondency. I await the post-conference mood this time with interest.

The problem now is that, at a UK level, Labour looks invigorated, radical, purposeful. I’ve noted that some people on the pro-indy side think they may be able to insult this visionary buzz out of Scottish political debate. I can promise them that isn’t going to work.

I think there are probably only two paths forward now. Either the membership has to stop letting itself be controlled and must take back some control for itself – or we all drift along like this until something happens to bring it all down. And in politics, sooner or later, something always happens to brings it all down.

The rest of us wonder when Scotland will get out of this slough of despond – and who the hell will lead us there.