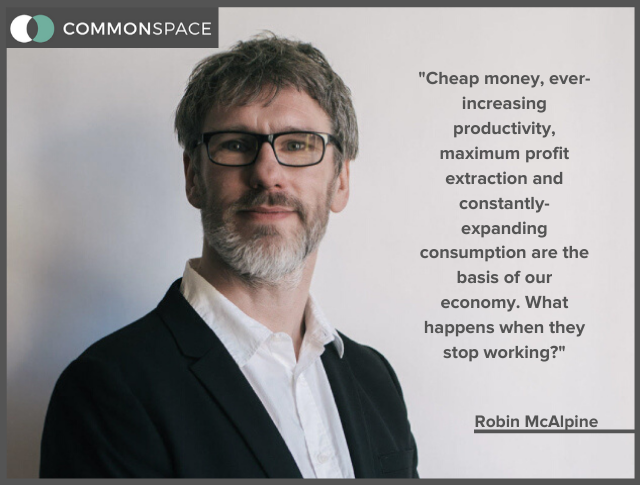 CAPITALISM – time for a reset. Nope, that’s not me, it’s not RIC, it’s not Colin Fox or Bernie Sanders. That’s the current advertising campaign for the Financial Times. Which begs the question – is Scotland going to be the last place in the developed world that gets it?

In most mature democracies there is now at least some kind of coherent debate about what the next phase of economic development in the developed world should look like, some discussion about how global rules are impacting domestically.

But in Scotland the economy seems to be treated like something which was settled a while ago. There is little debate, little thinking and no politics.

If in doubt, you may wish to note that Angus Robertson’s article at the weekend was about more than just saying ‘we weren’t really serious about a 2020 referendum so keep handing over your votes’. It also said that there would be no room for policy debate in the 2021 election campaign.

I can see the attraction of this to him – he is part of a group of right-wingers who have effectively taken control of the SNP. The Growth Commission is their bible of ‘never talk about changing the economy’. And they know it is barely supported in the party and is utterly filled with holes.

But they keep rubbing up against reality. This week alone, Scotland is falling down the league tables of economic and social wellbeing and there is renewed criticism of the way the government has failed to secure any real economic impact from its own renewable energy.

READ MORE: Robin McAlpine: Noise and silence – why the Growth Commission is the fight of our lives

The first of these is basically why the FT is telling you the old game is up. It is possibly the last serious newspaper in Britain and it knows the data, the facts, the trends. Economic performance is a sham and everything fundamental underlying it is looking ropey.

To understand the sham point you need to know a little about equity ‘buy back’. It is surprisingly simple – in the modern financialised world the fastest way for a corporation to make money isn’t to profit from its economic output but to artificially inflate its share value. This enables all involved to extract that extra value.

And that is what has been propping up the world economy ever since the financial crisis. Enormous sums of money were simply thrown at banks and the corporate sector (enough to have ended the climate crisis in Britain). They were supposed to invest all this quantitative easing money, but they didn’t.

Instead they used it to buy back their own shares, forcing the value of those shares up and making stupendous profits for doing nothing. That has been the basis of the global economy for a decade now and the grown-ups know it.

Underneath that there is so much reason for worry. Most of the factors which caused the 2008 crisis (low regulation, overvalued assets) are still in place and waiting to bite us again. There is a productivity crisis. And perhaps most alarmingly, there are signs of consumer demand having hit its limit (how long can we keep borrowing to spend when wages remain stagnant?).

Cheap money, ever-increasing productivity, maximum profit extraction and constantly-expanding consumption are the basis of our economy. What happens when they stop working?

READ MORE: As Trump warns the US against socialism, has the anti-capitalist threat waned in Britain?

None of this is abstract. The reason it serially fails to secure any Scottish economic impact from our own renewable energy is a little but to do with levers of economic power at Westminster. But that’s a bit of a figleaf and the reality is simpler – they keep selling it cheaply to foreign corporations from whom they don’t even try to demand any concessions.

In fact if anything the way Thatcher handled the oil was more equitable – the industry was taxed and Scotland got at least some engineering jobs. The Scottish Government is following entirely in the New Labour mould and on the economy New Labour was simply continuity Thatcherism.

And you will have heard that the First Minister thinks we need to balance this Thatcherite economic model, but I’m afraid she wants to balance it purely through the power of adjectives. A very senior figure in her party asked me (with a degree of irony) if I could detect a single change in Scottish economic policy since she did a TED talk about the wellbeing economy.

I had to answer that I couldn’t really detect a change in economic policy since about 1990. If anything I think Sturgeon’s regime is going in the opposite direction. The Growth Commission is the most Thatcherite thing I’ve seen in Scotland since, well, Thatcher. They have just doubled-down on PFI. And they’re accelerating their flog-off of what remains of Scotland’s renewable assets.

I suspect there is a good chance that this sell-off will find the Growth Commission’s author advising some of those bidding for the assets on how to win it cheap given he runs a lobbying firm which makes its money doing just that.

Forget what is said about Scotland’s economy, the only real aim is GDP growth because in politics that seems still to be the only thing anyone seems to think the media cares about. I fear they’re right.

This all worries me. That not a single elected figure anywhere in the SNP has anything counter to neoliberal orthodoxy to say about the economy is a worry. The fact there is barely a ‘public economist’ of any note in Scotland worries me. The fact that the Scottish media had a year to examine the Growth Commission and in that time landed fewer punches than Andrew Neil landed in a minute or so is a worry.

To say this matters is beyond an understatement. The entire case for Scottish independence will unravel if people don’t believe the economy is working for them – or at least that in Scotland we’re trying to make it work.

There are so many reasons to believe that most of what every progressive in Scotland wants to see happen is predicated on social cohesion which is constantly under threat because of the impact of economic inequality.

And that is before we get to the environmental crises and the reality of what will happen if we don’t do something now. Scotland’s woeful economic orthodoxy is a recipe for a revolution on the part of a younger generation, and I’m not sure on what side of that the independence movement is at the moment.

There is so much more, so much more we could do than this. Common Weal made the Scottish National Investment Bank happen and if only government actually wants it to drive change it really can.

Beyond that is absolutely multitudes. Common Weal published a painfully overlooked report on the economy last year. If that doesn’t contain enough transformational thinking for you, I don’t know what would.

But here’s the thing – Scotland is glued not to its own economy but to Davos where this very week the elite meet. We currently follow a leadership which believes that pleasing that economic elite is how to get to independence and a better society.

This is going to hit the rocks; neither I nor the Financial Times have any doubts about that. The problem is how and when. After big democratic shocks like the General Election there is chatter for a while – then everything settles down to normal again with the focus back on domestic politics.

So the Scottish Government can no longer dive behind the Brexit sofa every time attention threatens to move towards its domestic performance. Brexit and indy talk will subside as a day-to-day topic for the news agenda and the full glare of the public eye will be focussed entirely on the domestic agenda.

On the economy that means more and more of what is making us ill in the first place. I don’t expect the media or academia or the opposition parties to rescue us from Scotland’s dismal economic debate.

Which begs the question – who will?