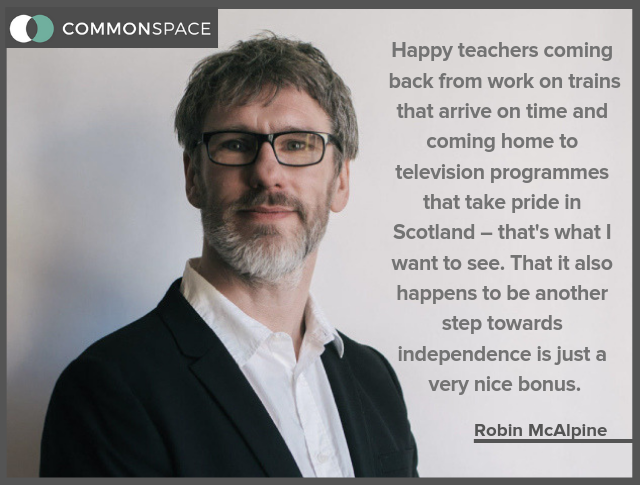 IN 1979, during the first devolution referendum in Scotland, one of the ‘talking points’ of the anti-devolutionists was about how rubbish Radio Scotland was. With a new Scottish BBC TV channel just launched, this is a lesson for today’s independence supporters.

Because I’ve been surprised by how many comments I’ve seen from indy supporters who seem to wish the new channel nothing but ill. Is a section of the movement really willing it to fail? And how do they think this will help us?

Radio Scotland had been launched the year before the 1979 referendum and was getting a reputation among establishment circles for being, well, a bit rubbish, a bit parochial, couthy – everything the Scotland-sceptics dislike.

And this mood and tone – ‘Scotland, a bit rubbish, a bit parochial, a bit embarrassing’ – was exactly the message the anti-devolution campaign was trying to give.

It highlights a key dynamic for people seeking more power for Scotland (now meaning independence) – the more people think Scotland is a bit rubbish, the less they think it should have power.

Which is why I’m utterly perplexed about those who’d like to see a Scottish TV channel fail. Among true believers the ‘BBC Bad’ line may generate cheers, but most voters will simply not see it that way. They’ll be looking to see what television in an independent Scotland would look like – and if it looks like it will be rubbish, it won’t help.

And for those who think that we can just say ‘it failed because it was the BBC – in an independent Scotland TV will be BRILLIANT!’, I wonder if you’ve said that out loud to hear what it sounds like.

Now I’ve got no great reason to be overly defensive of the BBC. For my whole life, from nuclear weapons to the miners’ strike to endless pro-monarchy propaganda to the plight of Palestinians to austerity and indyref, it has displayed a ‘neutrality’ based on a really very narrow establishment view of what it means to be neutral. I have no illusions.

And personally I’ve not been on BBC Scotland TV since the indyref – to get Common Weal onto Reporting Scotland I’d need to get caught robbing a bank or something.

But just like I can have substantial criticisms of the Scottish Government without wanting it to collapse, so we need to separate our criticisms of the BBC from our need to have a strong, flourishing and high-quality broadcast industry in Scotland.

I watched a fair bit of the first evening, and while neither light entertainment nor reality TV particularly ring my bell, I really didn’t think it was that bad. I really, really want it to do well.

You should too. There is a very general rule that when Scotland does well, attitudes to independence improve and when Scotland does badly, clinging to the union becomes more attractive. We should want success in Scotland every day, including our broadcasters.

And please remember that BBC Scotland is filled with good people trying to make the best television they can. Sure you may have doubts about the way they present some of the current affairs content, but there are absolutely plenty staff at the BBC who support independence.

READ MORE: The media is dead, long live the media!

I worry that we’ve got into the habit of lashing out. I know we’re all frustrated, but if our every response is to condemn someone for their perceived bias, what does that sum up to?

Let me give you an example. At the start of the year there was a flurry of indy-fury at a leaflet drop organised at Scotland’s train stations calling for Scotland’s trains to be taken into public ownership. This was almost universally seen by the indy movement as some kind of unionist stunt.

But here’s the thing – it was indy-supporting Common Weal which was commissioned by the TSSA rail union to produce the public ownership report. We worked with them on the leaflet campaign and the only reason we weren’t there in force was because it was done on our first day back to work after Christmas and we didn’t get time to organise supporters. It’s no ‘unionist plot’.

The TSSA had no idea Labour was even going to show up until late afternoon the day before. It was nothing to do with them – Labour printed their own leaflets and turned up by themselves.

Screaming ‘conspiracy’ because the indy movement failed to turn up and the other side did is hardly constructive. The performance of Scotland’s trains is a disgrace and we’re miles on the wrong side of public attitudes on this. The best we’ve come up with is people saying ‘I support public ownership, but not this’. Yeah, so in exactly what way do you support public ownership?

The same thing is happening with the prospect of a teachers’ strike. So quick are some people to want to act as a human shield for the Scottish Government that some of the below-the-lines comments in the National seem indistinguishable from the Daily Mail.

If the message for the next indyref is ‘Westminster, stop denigrating our teachers – we can denigrate our own teachers’, I think we’re in the wrong place.

We should want our teachers to be properly paid, appreciated and most certainly not attacked. We should listen to the giant majorities of Scots who want the trains nationalised, not Abellio’s lobbyists. We should want a great TV channel reflecting Scotland as a vibrant modern nation, not to talk it down before it has a chance to get started.

This was what was so amazing about the 2014 referendum. At the time I wrote about the big Edinburgh march and how I met an elderly English couple carrying Green Party flags. We chatted and what she said to me seemed really important – that all her life she has marched AGAINST things and for the first time she found something positive she really wanted to march FOR.

Those of you immersed in this year’s Six Nations tournament will be familiar with the idea of ‘painting a picture for the referee’ – that when the game breaks down and the ref blows his whistle, what actually happened can be less important than what it looks like happened.

The independence movement should always be in the business of painting a picture for the public. I don’t believe it helps us if it is an angry, finger-pointing picture. It certainly shouldn’t be a picture of us pointing angrily at the teachers.

And of course I know that some trade unions will indeed manage industrial disputes in a manner designed to help the Labour Party (though not the EIS). What they really want is for us to be on the wrong side, attacking the workers we would usually be supporting.

So what should we do? I had my suspicions about one union-organised protest not all that long ago. It looked like a clear party political stunt masquerading as ‘the workers’ struggle’ and it annoyed me. But I asked what kind of picture I wanted to paint – and it wasn’t me attacking workers. So I stayed silent.

I know just how much pent-up frustration there is in the independence movement just now, but we need to focus that frustration positively. It is never helpful to forget that the most important punch is often the one you don’t throw.

I want an independent Scotland because I believe that we can create an amazing, vibrant country full of vigour and optimism. Every time I flick through Common Weal’s Atlas of Opportunity I think it more. We can be amazing.

But I don’t think the way to become amazing is to talk ourselves down. It is so important for us to stand for something positive and uplifting that my heart sinks every time it feels like we’re being negative and pessimistic.

I have no doubts that Scotland’s new television channel will give me reason to grind my teeth soon enough. Such is life. But that doesn’t mean I wish it anything other than well. I hope it is a great success for all our sakes.

Happy teachers coming back from work on trains that arrive on time and coming home to television programmes that take pride in Scotland – that’s what I want to see. That it also happens to be another step towards independence is just a very nice bonus. I hope we can all get on board.