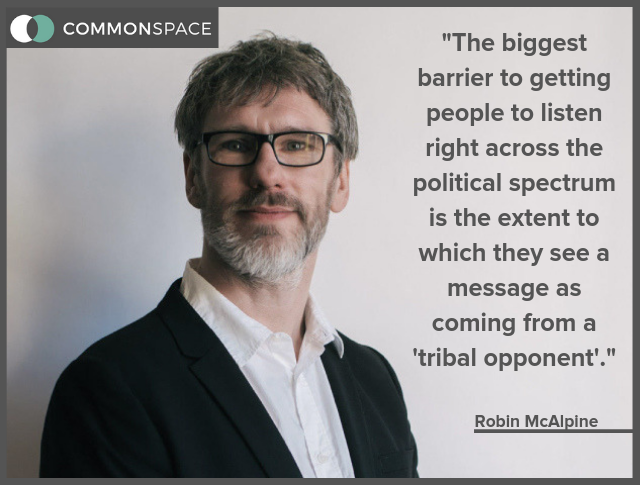 Following the Electoral Commission stating it will review the question of any future independence referendum, Common Weal Director Robin McAlpine argues that the independence movement should shake off its emotional attachment to ‘Yes’

I HAVE a house full of memorabilia of the 2014 independence referendum. It has very fond memories for me, gifts I was given at talking events all over the country. That word, ‘Yes’, is inextricably linked to my life, a reminder of one of the most important times in my life.

So I don’t say this with any great relish, but I’m almost certain it’s time to move on, that ‘Yes’ can’t be shorthand for the independence campaign any more.

I know for certain that many (if not most) independence supporters will find this hard; it has become a symbol for them, an indicator of a strong belief. But that (and the parliamentary reality) is the problem – I doubt we’ll get a ‘Yes/No’ question and amn’t sure we should want one anyway.

But no-one should feel bereft; it’s a great opportunity, a chance to open up conversations in a new way, a way that can help us to get target voters to listen.

Let me begin at the beginning; in private I’ve been arguing for a while that the reality is we’re unlikely to be allowed to use a ‘Yes/No’ question in the next referendum. You can come up with all the reasons in the world to believe this isn’t fair, but its based on a simple reality; best practice has changed in international thinking on referendums in the last five years.

It is now generally felt that yes/no questions are inherently unfair, that the word ‘yes’ has positive connotations which biases respondents in favour. While I think this is over-stated (did anyone really vote against staying in the UK because they liked the word ‘yes’?), it is a real factor.

I know it is a real factor because I know a lot of independence supporters view the positive association of ‘Yes’ as an asset we should hold on to.

But here’s the thing; as always, most of the power and most of the media is against us. We’re not the Leave campaign, sheltered by propagandist media from scrutiny. We need to be scrupulous in abiding by best standards throughout.

We’re (rightly) demanding greater scrutiny of the other side, its spending, the electoral process. We can’t do that if we’re rejecting best practice because we find it inconvenient.

And in any case, I would be amazed if there is a way of having an agreed referendum on that basis. The Scottish Government can push through ‘enabling legislation’ all it wants, it is inconceivable that Westminster would grant a Section 30 Order before insisting on conditions. Agreeing the wording is going to be a condition, and they’ve got a good argument against yes/no.

That’s just practicality though – there are other good reasons we should make a move, both related to public attitudes.

I know everyone and their dog has opinions on what the public thinks about independence; that’s why you need to have methodologies which test those opinions to see if they’re right.

For example, Neil McKay is convinced that his vendetta against ‘cybernats’ is really him doing us a favour because he believes the biggest obstacle to voters shifting is unpleasant indy campaigners. Well I’ve studied 12 hours of detailed academic-run focus groups on this subject and from memory, not a single participant expressed that view even once. Do stop doing us a ‘favour’ Neil.

But what absolutely does get former No voters’ backs up is telling them they were wrong, lecturing them to ‘think again about the choices you made’. ‘Yes’ has remained very much a part of our lives, but not theirs. For most it’s just a fading sticker on the back of a road sign.

It is seen as backwards-looking, a tiresome rerun of 2014. A much more effective approach is to be forward-looking, to say ‘in 2014 you made the decision you did for the reasons you did and you were right to follow your instincts – but a lot has changed and there is a new decision to make…’. That is best facilitated by drawing a line under the 2014 campaign.

There is another problem with ‘Yes’ – the biggest barrier to getting people to listen right across the political spectrum is the extent to which they see a message as coming from a ‘tribal opponent’.

The polarisation of politics and the culture of social media means we are more likely to define ourselves as part of a tribe, or at least as not part of another tribe. We listen to our own tribe members much more clearly.

I’ve written before on just how negative is the response when voters are approached with a party political badge (it’s the best way to close down a conversation). But I’ve seen pretty compelling evidence that the ‘Yes’ brand is having the same effect.

READ MORE: Analysis: The prospects for indyref2 and Jeremy Corbyn as Prime Minister are closely inter-twined

It seems to be reminding people of the team they didn’t support, the club they didn’t join. It feels ‘other’ to them. There were very clear signs that the word ‘independence’ got them talking but short-handing it to ‘Yes’ had the opposite effect.

I’m about 80 per cent sure that ‘Yes’ is no longer a brand asset for independence – but I’m about 95 per cent sure Westminster won’t agree to it, and certain we shouldn’t be seen to fight the Electoral Commission over it.

When I mention this to people they often get quite tetchy, saying ‘well we can’t have Leave and Remain’. No, obviously we can’t because it is so inextricably linked to the Brexit debate. But when did we start thinking that we needed to have some kind of ‘codeword’ in a referendum? I favour just presenting the two options.

The shortest version might have the question “What future do you want for Scotland?’ with the answers ‘Independence’ and ‘Union’ (or something like that). We’d campaign under an ‘independence’ banner. Even if the answer was ‘Scotland as an independent nation state’ or something more wordy, we don’t have to worry about people confusing the meaning of this referendum.

And if you think that ‘Yes’ is a biasing, positive word, you should see the reaction to the word ‘independence’. On its own, virtually everyone finds it a positive concept, an attractive word. It is a great lead word for us. I believe it is better than ‘Yes’.

There is an awful lot of chat in indy circles which is making me uneasy just now. One opinion poll has people who should know better telling us all ‘we’re winning’. Others who should also know better still talk as if a pre-2021 poll is a serious possibility when it’s really an outside bet at best.

And the number of times I hear activists express the view that we don’t need to answer any questions on currency or borders during the campaign, that we can just bluff it with trite catchphrases or lists of options to be considered later, really, really worries me. This is ‘bubble mentality’ of the first order, magical thinking to obscure inconvenient realities.

What we are is in an absolutely brilliant position to win. But we need to be more open about the barriers; we’re almost certainly going to have to fight tooth and nail to get that Section 30 Order – no-one is going to give us it ‘for free’. It will take nerve and courage in a game of chicken.

Sooner or later we’re going to find out that we stop ‘winning’ if people don’t think we can answer their reasonable questions. And there’s a very good chance that, at the last minute and catching us by surprise, the ‘Yes’ brand is rejected by Westminster with the support of the Electoral Commission.

I’ve been trying to argue that these are opportunities as much as problems, but that is only the case if we anticipate them, prepare for them. The current process of stumbling through and reacting to things at the last minute is predictably proving to be a disaster.

Imagine the new Boris Johnston administration was running the independence campaign (no vomiting). Say what you like but there is a very clear sense of purpose emanating from Downing Street. You can feel the guns being loaded, the barricades being reinforced. Things are happening.

I’m pretty confident that, if they were running a campaign for independence, they would have clocked all the information I’m presenting you above. Even if they DID want a Yes/No question, they’d have a strategy and a fall-back – and they’d know the strengths and weaknesses of the options.

Meanwhile we give every appearance of being totally caught out by the news that the Electoral Commission will want to look at the wording and conduct of a referendum. Read that out to yourselves again and you should get a sense of the perpetually reactive position we’re in. I mean, ‘Electoral Commission scrutinises election shocker’?

We can’t afford to get blind-sighted by the assumption that we can just hunt out all our old Yes kit and crack on as before because there is at least a good chance that won’t happen. And we can’t simply put our finger in the air and assume its definitely a good thing to cling to Yes. Are we sure?

My best assessment is no, it’s not an asset. It means a lot to me and I do not say it lightly, but I think its time for us to say goodbye to Yes so we can say hello to independence.