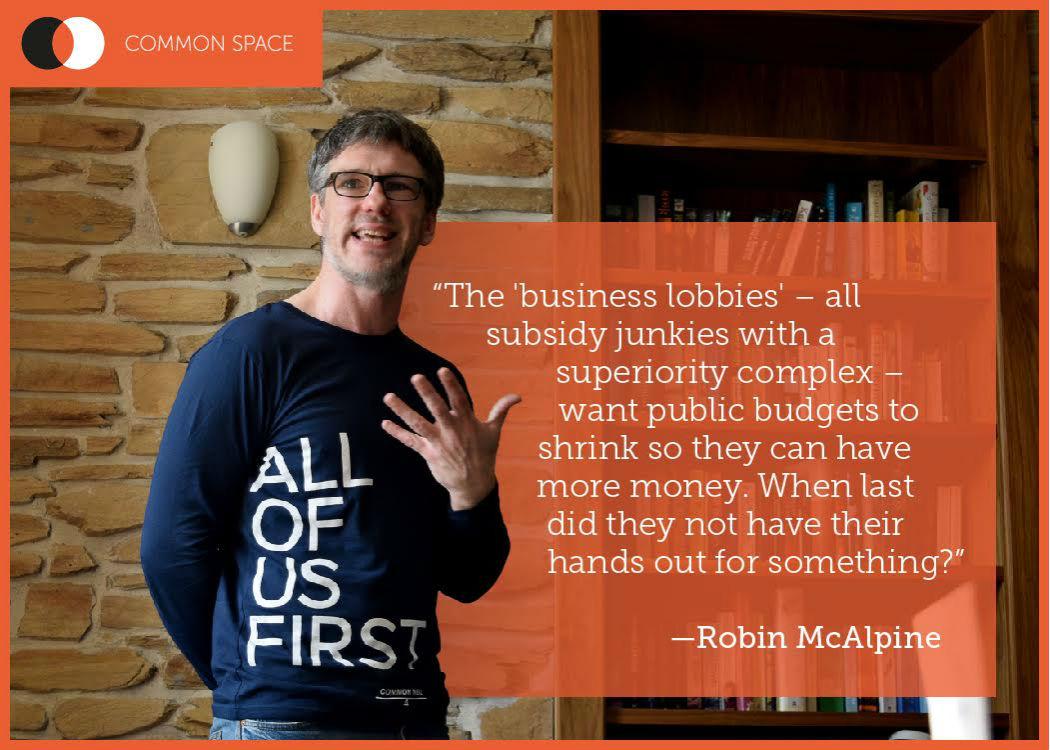 I’M JUST BACK from Brussels from a meeting of Europe’s transparency campaigners. We met to share our experiences of big business lobbying across the continent and to represent the case for transparency in the European Union’s consultative event on a mandatory register of lobbyists.

But why should you care? You’re on your way out to vote for a Scottish Government. We’re just not like London or Brussels. We’re more transparent, more honest. Didn’t we just pass legislation to set up a lobbying register? And in any case, there aren’t really lobbyists in Scotland in the same way there are in more ‘corrupt’ parliaments like those other ones. Right?

This line of argument brings me out in a wry smile, because it’s almost exactly what I heard the lobbyists for Google and Amazon and Big Pharma and weapons manufacturers and the oil companies say in a large meeting room inside the European Parliament on Monday afternoon.

‘Europe isn’t some kind of corrupt backwater, there is perfectly fine regulation, we’re all decent, honest people working for the greater good, lobbying is good for you, we’re happy to be transparent as long as you don’t force us to be transparent, oh and we’ll tell you what transparent really means, move along – nothing to see here.’

“Because there is no mandatory EU register of all lobbyists, no-one really knows how many EU lobbyists there are. But there are definitely more than there are people working for the European Union.”

So let’s be clear, Scotland really isn’t Brussels. Because there is no mandatory EU register of all lobbyists, no-one really knows how many EU lobbyists there are. But there are definitely more than there are people working for the European Union.

And yes we have just passed a Lobbying Bill. Which places us somewhere in the upper half of the middle rank of European countries, so long as the regulations (which we have yet to see) are strong enough. So we’re not anything like as transparent on lobbying as countries like Ireland or Lithuania (which both have much stronger regulation) but we’re better than France or Germany (which have none) or the UK (where regulation is so biased it’s almost worse than if there was none).

On the other hand, as far as I can tell, Scotland is the only Parliament in Europe whose country does not have even one single person who is dedicated to researching and monitoring corporate and big business lobbying and the general commercial capture of politics.

“In Scotland we don’t even have a proper picture of who comes in and out of those revolving doors.”

At least in London there are people who research the ‘revolving door’ where politicians and civil servants trade insider knowledge for cash once they leave their jobs and join the corporations. In Scotland we don’t even have a proper picture of who comes in and out of those revolving doors.

Common Weal and the Electoral Reform Society, along with a couple of academics and activists (including SpinWatch), are virtually alone in trying to shed light on how commercial interests are seeking to get the Scottish Parliament to do their bidding.

For every penny we can dedicate to keeping Scottish politics honest, Ineos and Amazon and Serco and Atos can spend thousands of pounds trying to get their own way. And as things stand in Scotland you have absolutely no right to know how much they have been spending or what they’ve been spending it on.

To make matters worse, we don’t really have a media which is awfully interested in exposing the role of corporations in Scottish politics – unless someone else does most of the work and it can then be used to embarrass the Scottish Government.

For every penny we can dedicate to keeping Scottish politics honest, Ineos and Amazon and Serco and Atos can spend thousands of pounds trying to get their own way.

As we went round the table in our Brussels meeting, sharing experiences in each of our countries, the guy from Croatia explained the alarming right-wing, anti-democratic takeover which is under way. Among the appalling things he highlighted that are happening he expressed great alarm at the removal of public funding for independent, non-profit media, the one part of the media which was really investigating commercial conflicts of interest.

I stifled a laugh – there’s not a penny of public funding for independent, non-profit media in Scotland. There’s barely a penny available to support public interest research of any kind.

On the other hand, if you have expensive lobbyists the picture seems to be a bit different. A million pounds for Amazon, PS150,000 hand-out to the successful and very profitable T In The Park music festival. The T In The Park money alone isn’t far from Common Weal’s entire annual budget.

We work with lots of different organisations which are trying to do their best to provide some balance to the power of commercial interests. Friends of the Earth Scotland do a valiant job on subjects like investment in fossil fuels and the power of the petrochemical industry.

“In comparison to the resources of the organisations and companies whose agenda we’re trying to challenge – we’ve barely got two beans to rub together.”

Global Justice Now does what it can to highlight the impacts of TTIP. Nourish Scotland tries to create ideas and narrative about a food system which is not wholly captured by supermarkets. Community groups fight multinationals over fracking.

And between us all – in comparison to the resources of the organisations and companies whose agenda we’re trying to challenge – we’ve barely got two beans to rub together.

This has been a problem since the establishment of the Scottish Parliament. It is precisely because we really are more transparent and less corrupt than other parliaments that we have been so complacent.

It was difficult to get politicians to see any problem with the Scottish Parliament handing tens of thousands of pounds every year to an initiative which was all about giving business interests direct access to politicians – without giving anything similar to other groups to argue a different case.

“It was difficult to get politicians to see any problem with the Scottish Parliament handing tens of thousands of pounds every year to an initiative which was all about giving business interests direct access to politicians.”

And its getting worse. The more power the Scottish Parliament gets, the more commercial interests want to shape how that power is used.

The commercial fracking lobby isn’t going to give up over the next five years. The alcohol multinationals show no signs of backing down in their war with the Scottish Government over moves to reduce access to irresponsibly cheap alcohol.

The Chambers of Commerce and the ‘business lobbies’ – all subsidy junkies with a superiority complex – want public budgets to shrink so they can have more money. When last did they not have their hands out for something?

The aviation industry very much wants its cut in Air Passenger Duty. The big corporate housing developers will be queueing up to get contracts for public housing which they’ll then milk for every penny they can.

“Local authorities are pushing to make sure that the commitment to increasing free childcare is done on their terms and not on parents’ terms.”

The North Sea oil industry wants all the subsidy it can get now it isn’t raking in a fortune from oil which should have made the public wealthy. The equity finance companies which own PFI assets will be fighting hard to make sure they are not held accountable for their ‘assets’ falling down around children.

The ‘we’ve got our lawyers and we’re going to use them’ private landowners will give not an inch in their battle to protect de facto feudalism in Scotland. The supermarkets and parasitic property developers want planning permission in their pockets.

And it’s not just the private sector. Universities are lobbying to wriggle out of having Freedom of Information legislation apply to them. Local authorities are pushing to make sure that the commitment to increasing free childcare is done on their terms and not on parents’ terms.

These are only a selection of the battles for the soul of Scotland’s government which will be taking place over the next five years.

“Private landowners will give not an inch in their battle to protect de facto feudalism in Scotland.”

And here are two really sobering thoughts. First, in my opinion, every single one of these examples is against the Scottish public interest. The reason that the lobbyists are lobbying for these things is because it benefits them financially – and that happens at your expense.

Let me be absolutely clear about something here – seeking to influence the decisions parliament makes is a crucial part of our democracy. Common Weal will be signing the lobbyists register on day one because we also lobby (with the difference being that we believe we’re lobbying on your behalf).

But why do we tolerate a system in which your level of influence is very largely determined by how much money you have? If you want to know why the world is becoming so much more unequal, a large part is because people with money rig politics to make sure that they gain more and more money.

I believe this is Scotland’s battle over the next five years. There may be some occasions where the corporate interests and the public interest coincide. There may also be a general increase in blue moons.

“There may be some occasions where the corporate interests and the public interest coincide. There may also be a general increase in blue moons.”

For the rest of it, the penniless good guys are going to have to pick the fights carefully and use the non-financial resources at their disposal wisely. It is tiring, but it is essential.

(And I can’t not mention that next week Common Weal will be kicking off a bit of a fundraising drive – if you don’t already give us PS5 a month, I’d ask you to seriously consider doing it. We want to be your lobbyists but we’re already stretched beyond our limits…)

I grew up in a Scotland which to me always seemed to abhor the abuse of power. I always remember Scots as the people who backed the underdog and demanded that a fight be fair. How ironic if the lobbyists and corporations with their pockets stuffed with cash turn the Scottish public into underdogs in their own parliament.

It’s not all just ‘going to be OK’. Big Money is fighting and fighting hard. We the public and our elected politicians must fight back. Or we will lose.