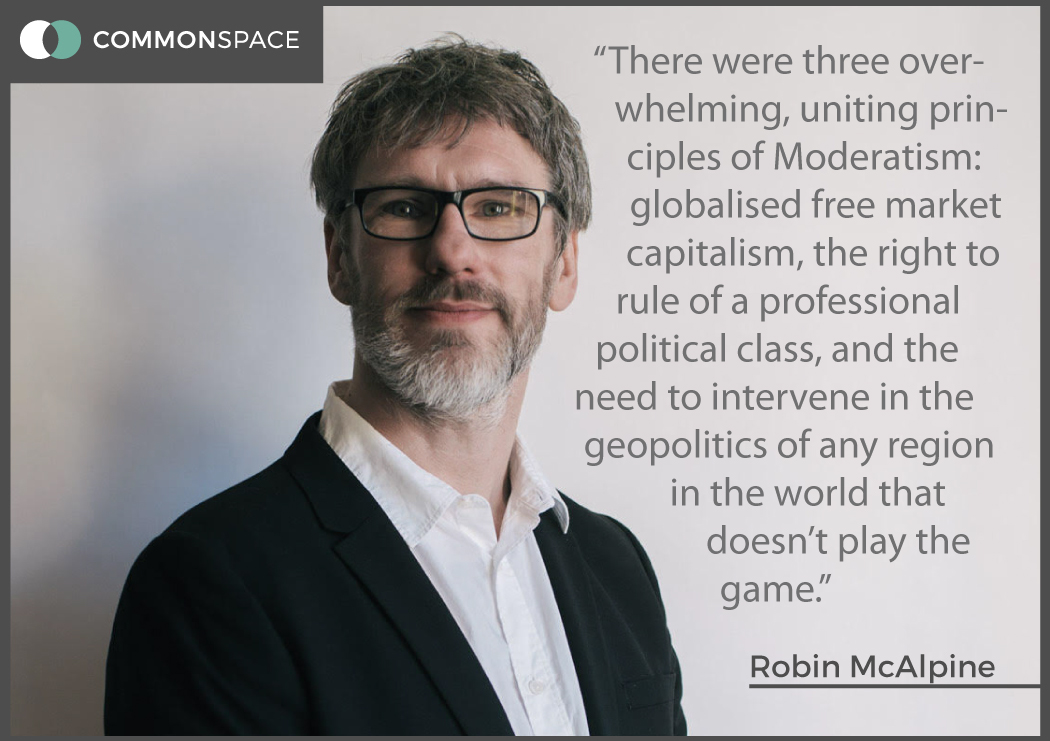 Common Weal Director Robin McAlpine argues the Yellow Vests protests in France marks the end of a 40 years political empire that said it didn’t have an ideology but always ruled for the rich – Moderatism.

IF 2018 IS REMEMBERED by history, I suspect it may be as the year the political empire of ‘Moderates’ finally falls apart irreparably.

It’s of course possible you didn’t quite notice their empire. It lasted not a long way short of 40 years, from about Glasnost to about Gilet Jaunes. The reason you might not have noticed is that this empire’s ideology was that it didn’t have an ideology – that it was a natural phenomenon.

It didn’t give itself a name, or at least not consistently. The most accurate title would be ‘neoliberal’ given that it was a new form of a historical vision of liberal capitalism (a vision that lasted from about when Adam Smith mentioned ‘invisible hands’ right until he subsequently noticed that the invisible hands kept forming cartels…).

But after the anti-globalisation movements of the decade or so around the millennium, this term was mostly banned by the media (who were largely in the Blair camp).

Instead the media allowed the neoliberals to choose their own nicknames. Blair started out with ‘reformer’ (which Macron still uses) but moved onto ‘centrist’ quite quickly. Some people thought that sounded a bit clinical and so started using ‘moderate’.

What they were desperately in search of was a term that meant ‘sane, grown up, not mad, you want to be like us’. It was just about as true as the ‘Bolsheviks’ being in the majority (the original meaning of the word). The Bolsheviks weren’t a majority and the Moderates weren’t moderate.

That’s why it’s become my preferred term for them; it suits our ironic times. Every time I write Moderate you need to imagine the inverted commas.

So what was the substance of their empire? There were three overwhelming, uniting principles of Moderatism; globalised free market capitalism, the right to rule of a professional political class, and the need to intervene in the geopolitics of any region of the world which didn’t play the game (and wasn’t predominantly white).

READ MORE – Media Rebuttal: The #YellowVests movement is not ‘nihilism’

The first of these is straightforward – under no circumstances was any question to be raised about the globalisation agenda, the Davos vision for the world. The first role of a government was to facilitate corporations, because everything else good came from that.

The ultimate goal was to remove economic policy from the sphere of influence of domestic politics altogether and allow the world economy to be run by the ‘Masters of the Universe’ (that was a slip-up in the whole ‘call yourself names that make you sound harmless’ strategy).

Which is a straightforward lead-in to the next philosophical pillar – the world is complicated, the public is stupid and wants contradictory things, so we need an effective ruling class willing to ignore them (and especially so if there is to be a non-democratic global economic order).

I suspect that many of you haven’t spent all that much time among the ‘ruling class’ in their natural environment. They really, really believe that they (and everyone they know) are the best possible people to run the show. They really (really) believe that people who ask questions or raise objections just don’t understand how complicated all this is.

For them, stating ‘that’s your lot, commoners’ isn’t a value judgement but a statement of fact.

This delusional self-certainty led to the third element of Moderatism – international intervention. If you are the Master of the Universe, it is your responsibility to keep your universe in harmony.

Naturally, harmony was quite specifically defined. The horrendous wars in the Congo or Rwanda happened under Moderate watch – but neither really affected the ‘system’, and so nothing was done.

But Kosovo was on the edge of their neighbourhood and the Middle East had the oil they all needed. And since weapons manufacturers are very much ‘Moderates’ (couldn’t not do inverted commas that time), the solution was to bomb those countries back into line.

One of the clever things about Moderatism was that it allowed for a few different flavours. The Hapsburgs or the Soviets required steely discipline but Moderatism allows for both George W Bush and Tony Blair, a conservative and a liberal (these used to be opposites…).

The confusion some felt at the affinity between these two showed just how effective Moderate propaganda had been. They belonged together from the beginning – how did we come to be surprised?

That led us to the current situation where there is a collection of people who claim to be ‘left’ and claim that the ‘four freedoms’ of the EU (boy, Moderates are good at this propaganda thing) is part of their cause.

For clarity, the four freedom involve the right of big business to move capital, goods, services and their ‘human resources’ where they want, when they want and in whatever way they want to maximise their profit with the impact on the host nations being irrelevant.

That’s why the ‘Moderate left’ is so obsessed with pronouns and identity – it allows them simultaneously to turn a blind eye to mass poverty and the extinction of countless species but still feel radical.

Which takes us to ‘so how did all that go then?’. The Moderate era doesn’t start with a coup or a revolution – it kind of blends in. But it really begins with Thatcher and Regan so I’d date the Moderate era to the late 1970s (by which time the Chicago School of economists had invented it).

So, what happened on their watch? First of all, I’m afraid to say that there doesn’t seem to be a (poor) black person’s house that a Moderate didn’t think might look better as rubble. We can’t start without looking at Afghanistan, Iraq, Libya, Syria and (by proxy) Yemen, Palestine and so on.

Mass migration to escape violence is a crucial aspect. So is massively rising inequality – I’m trying to think of a Moderate government anywhere which didn’t cut taxes for the rich and I’m coming up blank.

The ‘reform’ of public services was another constant, with ‘reform’ always meaning ‘opening up to corporate profits’. PFI is the logical conclusion, a system where the public can get a school, but only if a corporation or investment fund is paid enough for two, three or four schools.

Then there is Moderatism’s true legacy; free markets entrenched the idea that getting money out of people’s pockets was all that counted. Hence hyper-consumerism and inordinately long supply chains. Which are by far the primary causes of the current extinction threat to the planet.

When you come to compare regimes from history’s past, it is worth noting that from the Roman and Mongol empires to the Nazis and the Soviets, many terrible things were done – but they stopped short of extinction. That is a uniquely Moderate legacy to the world.

But weirdly, none of this is what is bringing them down (though economic inequality and mass migration are playing a big part). The real root of their problem is (as always in human affairs) is not money but power.

If they only understood that shrinking wages, lost jobs and wholesale upheaval of communities was entirely necessary to maintain the corporate profits which underpin the world order, then they’d fall in line. The fact that the Moderates all got rich is irrelevant.

Yet by 2018, Moderates can’t win a raffle never mind an election. That’s because over and over again they not only fail to understand, they refuse to understand. ‘If we just cancel Brexit now things can go back to the way they were’, they say.

For a while I couldn’t work out how they thought anyone would believe that ‘every aspect of our decline is the fault of those devious Russians’ stuff. It’s so patently ridiculous to say that Trump and Brexit are the result of some dodgy Facebook posts.

READ MORE – In the spotlight: Has Russia really hijacked US democracy with Donald Trump?

Then I realised that they believe it. They have to believe it. The alternative is realising they’re on their way out. Every regime goes mad at the end.

Why is 2018 their end point? They did a good job of surviving their first existential threat – the banking collapse they created in 2008. But the political cost was very high indeed – and they won’t accept either their complicity or the price ordinary people paid.

So their final, final hope was an ‘Axis of Moderation’ between Macron and Merkel which could show Europe, one last time, that austerity for the poor, largesse for the rich and the slashing of public services was the way forward.

RIP Moderates – we never loved you as much as you loved yourselves. That would have been impossible.