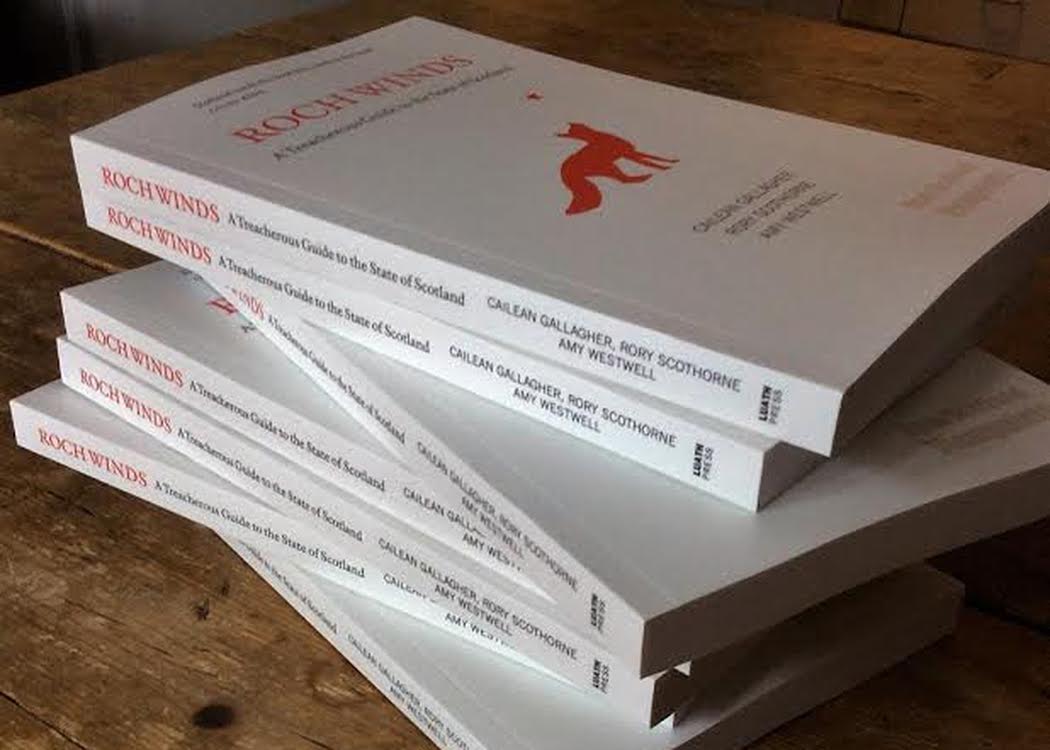 “WE MIGHT need to simply be destructive for a while,” says Amy Westwell, one of three authors of a new book on post-referendum Scotland.

‘Destructive criticism’ is one of the many contrarian ideas that mark the tract, which seeks to roll back what the authors view as the conformities of the post-referendum era.

“There’s been too much constructive criticism,” says Cailean Gallagher, a former staffer for Yes Scotland and co-author of ‘Roch Winds: A treacherous guide to the state of Scotland’.

The book is unique for being a polemic written by three young participants in the broad Yes movement of 2012-14, and one still motivated by many of the same leftist causes championed during that movement, yet pessimistic about subsequent developments in Scottish politics.

At the heart of its argument is the call to anger and an intellectual pessimism to dispel the mood of philistine optimism and complacency which they feel characterises too much of Scotland’s contemporary political environment.

Across an archipelago of chapter and sub-chapter essays, the book traces a rejectionist map of Scottish politics.

The Yes campaign itself comes in for sharp criticism. Harsher still is the humbling of pretensions in the ‘Scottish Ideology’ – a belief, widely percolated through the movement for independence, that Scottish nationalism has a special claim to moral and even leftist sentiment.

But it is the socialist left itself, its interaction with the referendum and even post-referendum developments such as the rise of Jeremy Corbyn to leadership of the Labour party which come in for the harshest of criticisms.

Most of these criticisms seem a little surprising, since all three authors were leading young activists in the Yes movement and two are Labour members who welcomed Corbyn’s leadership of the party.

The motif of the book is Niccolo Machiavelli’s fox, a symbol of intrigue a treachery, and the book builds towards a call for a treasonous attitude by Scottish socialists, urging them to spurn the parliament and democratic legitimacy to promote disruption and chaos.

The authors are well aware that this isn’t exactly the way to build a coalition in their praise.

Westwell says: “In his foreword to the book Scott Hames says that he can’t think of anyone in Scottish public life who won’t find something to hate in what we’ve written.

“We think hate is a very important and useful tool in politics, but we’re bored of all this hatred and vitriol being oriented towards unionism or nationalism,” she adds. “Hopefully people will find enough to get apoplectic about in our book to write something interesting in response.

“We think hate is a very important and useful tool in politics, but we’re bored of all this hatred and vitriol being oriented towards unionism or nationalism.” Amy Westwell

As though this weren’t daunting enough, it came from a position of self-conscious sciolism.

Rory Scothorne, a founding member of National Collective, the artistic movement for independence, and the short volumes third co-author, says: “When Lesley Riddoch discovered our blog [which inspired the book of the same name] she said we’d ‘walked out into no-man’s land’,”

“That was always the point. We had a sense, roughly formed and not really backed up by much theory, that pretty much every established understanding of Scottish politics was wrong.

“Not only wrong, but something much worse – boring.” 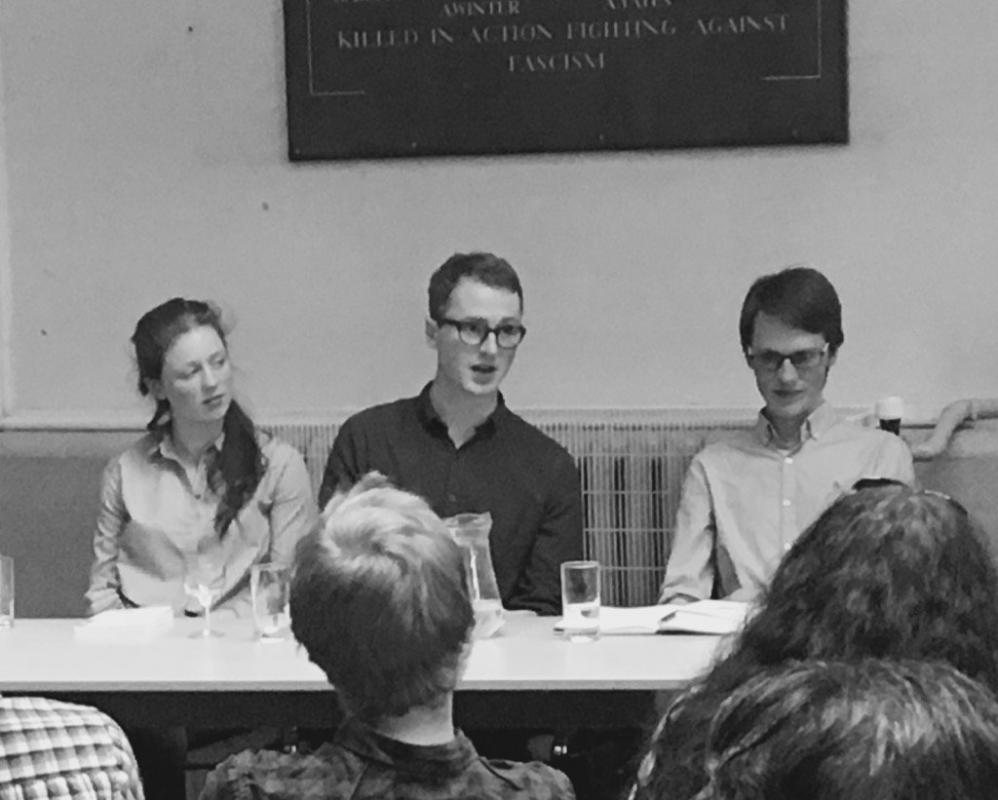 A part of this ‘boredom’ has to do with the origin of the Scottish Parliament, and involves a kick to some of the verities of so-called ‘progressive’ politics.

“Because of operating through a devolved structure, there are lots of folk in Scottish Labour who think you solve poverty via service interventions in peoples’ lives from education and the NHS.

“When they see that isn’t working, they simply propose earlier interventions!”

“As we say in chapter one, the Scottish Parliament operates as a kind of lobster-pot, trapping political aspirations within its narrow scope.”

For all the book’s criticisms of Labourism, which extend to the party’s left as well as centre and right wings, it doesn’t shed a kindly light on the SNP’s usurpation of the Labour party in Scotland.

Gallagher says: “SNP dominance is not a good thing, especially now it is seen as the left party in Scotland because the main opposition is from the Tories. Neither the SNP or Scottish Labour were left parties, but the SNP has a more market-driven agenda, and has fewer socialist MSPs in its ranks than Labour did.

The cause of independence itself doesn’t escape a pessimistic reassessment. The opportunity represented by the September 2014 ballot that, according to ‘Roch Winds’, was unintended by all parties has largely elided.

“Unlike most moments of state formation, the leading powers were curiously unprepared for this. The SNP had been forced to hold a referendum after winning a majority that was never meant to be possible,” Westwell says.

“The SNP’s juvenile nature was shown up in the 2015 election when it turned out there were quite a few rotten apples among those selected for elected office. They were just not prepared for governing a newly formed state, and this would have been a golden opportunity for socialists.

Against this rather dour but not unengaging backdrop, the trio call for the left to find “new terrain” outside of the sphere of parliamentary politics.

“We can’t claw back the working conditions of the past, so new forms of activism need to focus on challenging the prerogative to work itself.” Amy Westwell

Westwell says: “In Scotland, Better than Zero are challenging insecure work and trying to use innovative means to do so.

“We can’t claw back the working conditions of the past, so new forms of activism need to focus on challenging the prerogative to work itself.

“We need to think about where we have power in this economy, and what we can do with it.”

The book will probably draw as much criticism as it is dealing out. Complaints will inevitably characterise it as childish, as clannish and indulgent since it primarily deals with debates within the self-identified left. Or as simple betrayal, because it points away from constitutional politics and not towards an immediately compelling strategic alternative.

Yet, given the book’s fixation on the vitalising qualities of anger, pessimism, even hatred, you can’t help but feel the authors are relishing the coming consternation.

The book is avaliable from its publisher, Luath Press, here.