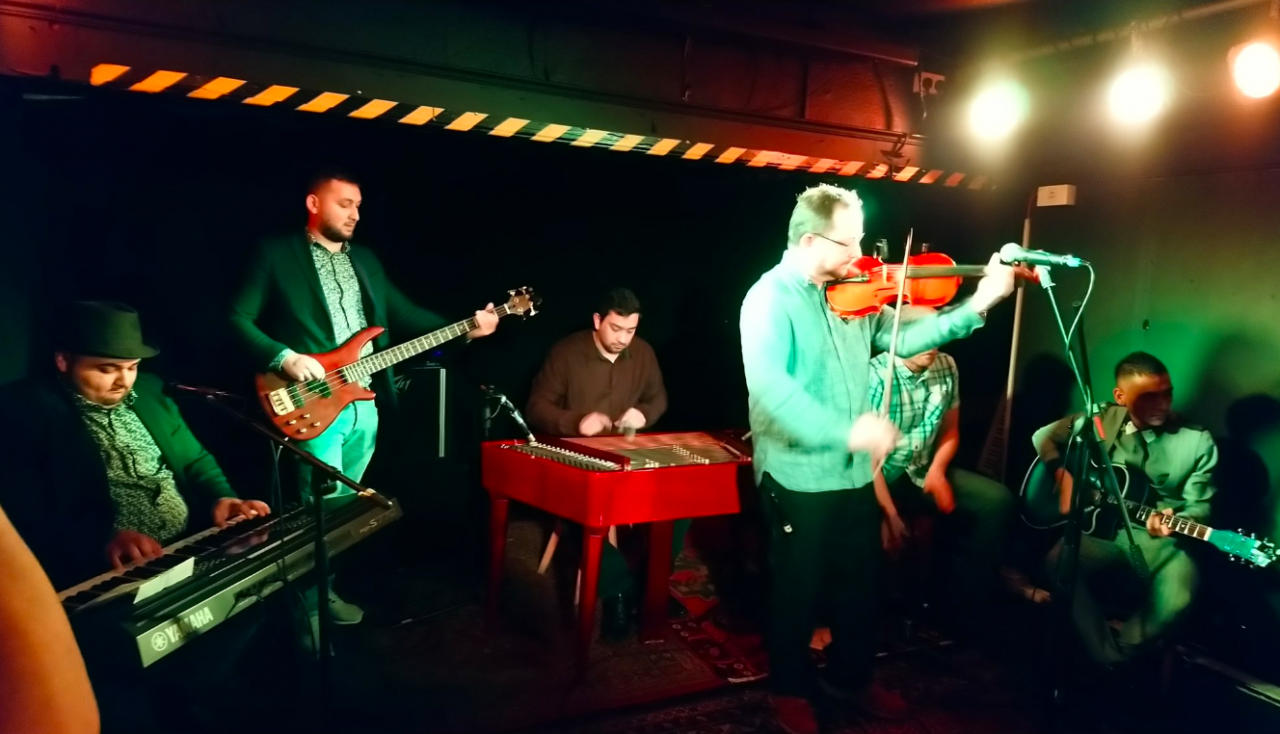 Following the Roma Connections gig as part of the Celtic Connections festival, Rhiannon Davies explores the role of culture in developing a ‘web’ of integration in a changing Scotland

A FIDDLE is played furiously while a drummer keeps time, and dancers start to whirl around in pairs, laughing and pulling bystanders to the dancefloor. For the most part, it’s a familiar sight right across in Scotland. But the scene contains a few unfamiliar elements.

The centre of the stage is taken up by, what on first sight appears to be a small wooden table with decorative legs, painted bright red. It’s a Hungarian chordophone, with steel strings stretched across it. Seated behind it, beating the notes at a speed almost imperceptible to the naked eye is Hungarian virtuoso, Janos Kallai.

The band, Zor, is made up of Romanian, Hungarian, Slovak and Polish players, newly formed in Glasgow to spread the best music from their cultures. The stars of the dancefloor are the women in brightly coloured, traditional Roma dress, their skirts billowing out as they turn. But the audience is a real mix of people of different ages and ethnicities.

New band, Zor, tonight at @therumshack_gla playing at the #Roma Connections night as part of @ccfest. A filled dancefloor for this Slovak & Czech Roma group playing some stomping tunes with glittering cimbalom playing to boot. pic.twitter.com/4BSMMUOtfw

The gig is part of the Celtic Connections festival’s new programme for 2020, Celtic Connections in the Community. This partnership with BEMIS, Scotland’s support body for the ethnic minority voluntary sector, backed by UNISON and the Scottish Government, involved specially created performances celebrating Glasgow’s ‘contemporary diversity of cultural traditions’ – including those from Ireland, Africa and Afghanistan and the diverse Glasgow neighbourhood of Maryhill.

Speaking about how it came to be, Danny Boyle, Parliamentary and Policy Officer at BEMIS says: “The ethos of the programme is to use culture, language, music, song, dance and other artistic expressions as a mechanism for community cohesion and integration. We want Scotland’s indigenous and international citizens to celebrate Scotland as their home using their own cultural traditions and, in doing so, shape Scotland’s contemporary cultural identity.

“In practice we’ve found that these diverse cultural expressions have common roots and people and communities see themselves in each other when we listen and appreciate the common experiences of people articulated through cultural traditions. This is an incredibly powerful tool for developing community cohesion, developing resilience in communities and providing an alternative narrative to those who seek to split communities up as competing adversaries on the basis of their skin colour, nationality, ethnicity or identity.”

Celtic Connections regularly comes under criticism for tickets being too expensive, pricing out many people, but this series has either been free or more affordable to attend. The Roma Connections gig took place in the Dancehall, the dark and low-key gig venue tucked behind the Rum Shack in the southside of Glasgow.

Leading the band on violin was professional musician, János Lang. He is also creative director of Ando Glaso, an organisation formed in 2016 to ‘encourage greater understanding and participation in the cultural heritage of the Roma people in Scotland’. Speaking to CommonSpace when the dust has settled the next day, he explains that it’s an interesting time to be working in this field.

“Traditionally when Roma people settled in country, whether 500 years ago or more recently, Roma culture becomes very integrated with local culture, and picks up a lot of new things. Working with young people, we see that this is the beginning of a new Roma generation here in Glasgow, which will eventually form its own unique heritage and culture.

“Even just what you saw yesterday;  those people, Romanian, Polish, Slovaks had probably never shared a stage before. But this is what we want to do at Ando Glaso, bring people together and create connections. We want to inspire people to cross pollinate each other’s culture and see what comes out of it.”

Lang is from Hungary, but is part-Roma. For him, culture is an important way of connecting to Roma heritage. “It’s always been part of our tradition, which was seen as quite normal right up until mid 20th century, when we were marginalised to the very edge of the society. It is our heritage that has kept us going and how people managed to still have a decent life.”

Integration can be a loaded word, but there is a growing recognition that attempt needs to be made on both sides to adapt to the changing world. On the streets of Govanhill, Glasgow’s most ethnically diverse neighbourhood, it’s said there are 52 different nationalities, with 32 languages spoken by residents of the 13 tenement blocks.

“I see it as a web, rather than being a two directional model”

She goes on: “I see it as a web, rather than being a two directional model. There are lots of people living here, for different reasons, who have come at different times. Integration is about all of those people connecting; not trying to cover over, or get rid of the differences, but celebrating them. All the differences between the people that live here are what make these communities so special.

Sharing culture is often seen as an accessible way of fostering integration. But it’s not the only option on the table. Knowing a few words of another’s language can make a huge difference to that person, and is one of the reasons why the Govanhill Swap Market has been offering lessons in Romanes.

Yet attending an event like Roma Connections, or the upcoming Ethiopian coffee ceremony at Govanhill’s Milk Café, can be a first step for many. Boyle agrees: “Culture is important because it defines us as human beings. We tell our story through our culture, we find common experience through culture, we gain confidence in our and other peoples experiences and culture helps us build foundations for fulfilling our potential and developing empathy and understanding between people and communities.

“As we’ve been re-iterating at every event, Glasgow and Scotland is changing and every single attendee, musician, singer, dancer and volunteer is part of that change and we intend to embrace it.”

For Lang, the answer to what indigenous Glasgwegians can do to integrate more with those who might have arrived more recently is simple. “Music is such a big part of our culture – it’s an obvious way for others to engage with Roma people. All you have to do is turn up and enjoy it.”